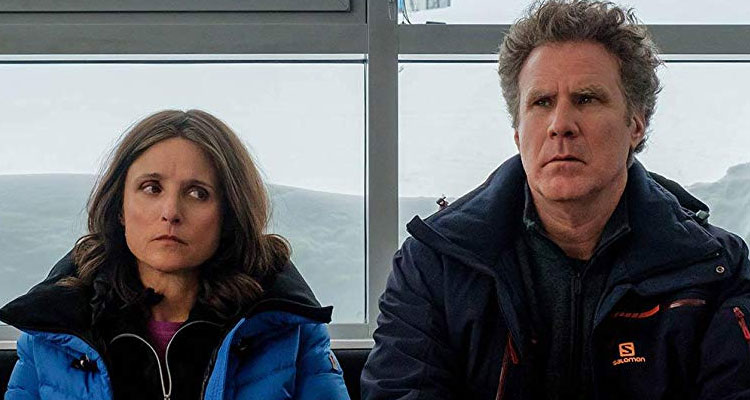 The Plot: American couple Pete (Will Ferrell) and his wife Billie (Julia Louis-Dreyfus) are having a jolly skiing holiday in Austria with their two young sons. While sitting down to lunch at the ski resort, there’s a controlled avalanche explosion nearby. It gets closer and closer though, soon heading towards the family and threatening to engulf them. Pete gets up, grabs his phone and runs for it. The danger passes and he returns to his shaken family as if nothing had happened. Billie observes his behaviour, building up her pent-up frustration to have it out with him in the most awkward manner possible – in front of friends. He denies any wrongdoing and carries on regardless. But all is not well and even their sons begin to wonder – what’s going on with Dad?

The Verdict: There’s a scene in Downhill in which beleaguered American husband Pete struggles up an Austrian skiing slope to reach his wife Billie, who has fallen and needs help. It’s symptomatic of the film as a whole, a film that for most of its slim running is an uphill struggle to make itself relevant. It can’t be easy, living in the shadow of an acclaimed Golden Globe and BAFTA-nominated original – Ruben Ostlund’s 2014 Scandinavian film Force Majeure. That was a merciless dissection of a marriage in crisis and a critique on what defines 21st Century masculinity – or perhaps the search for it when it takes a holiday. Downhill is pretty much what you’d expect of an American remake of a foreign film – simplified, silly at times, occasionally crude and caricatures Europeans as very matter-of-fact about their sex lives (Miranda Otto’s outrageously accented Austrian hotelier).

It’s a disappointing result for directing team Nat Faxon and Jim Rash, having previously made some wonderful character pieces like The Way Way Back and written the script for The Descendants. Their script with Jesse Armstrong (the brains behind acerbic TV series Succession) has clearly lost something in the translation. The credits say that Downhill is inspired by Force Majeure, but it owes it more than just a cursory reference. The central concept, that of a confused nuclear family heading towards a meltdown, is an intriguing one. The script does tease out these elements over the course of the film, through frosty body language between the married couple and a seeming unwillingness for Pete to confront just why he ran. A having-it-out-scene in front of disbelieving friends is cringeworthy.

It is a mid-life crisis? The realisation that familiarity over time has set in and Pete is secretly looking for a way out of his duties as a husband and father? Faxon and Rash drop some hints, but not enough to develop it into a satisfying whole. The sophistication in how this family drama played out in the original film is fairly ice-thin here. This stems from the script’s inability to exploit the dark comedic potential of the story and to be harder on its characters, thereby pushing the lead actors into more uneasy territory. Ferrell and Louis-Dreyfus make for an appealing, exasperated couple who don’t know what to make of it all but their

talents are under-served by the half-baked script. Downhill carries forward one cast member from the original – Tormund Giantsbane himself Kristofer Hivju as an unsympathetic resort boss. More of him would have been welcome. The general air though is of a film that doesn’t really have the nerve to take potshots at the modern American male psyche. They could certainly use it, given who is sitting in the Oval Office at present. Do yourself a favour – track down Force Majeure and watch it instead (it’s on Film4 on 1st March).
Rating: 2 / 5