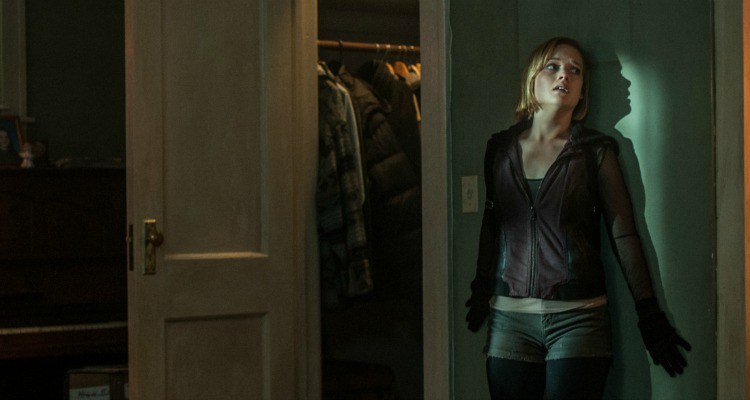 DON’T BREATHE (USA/16/88mins)
Directed by Fede Alvarez. Starring Jane Levy, Dylan Minette,
Daniel Zovatto, Stephen Lang, Emma Bercovici.
THE PLOT: In the economic wasteland of Detroit, Money (Daniel Zovatto), Alex (Dylan Minette) and Rocky (Jane Levy) have found a way to make some cash, with the dream of getting out of the dying town; burglary. When what is to be their final job – robbing a six figure sum from a blind man in an abandoned part of town – becomes very complicated, the three soon find themselves fighting for their lives against an opponent with more than protecting himself on his mind.
THE VERDICT: The concept of stealing from a blind man is an inherently creepy one, and it is this that makes ‘Don’t Breathe’ a home invasion thriller with a twist. Although the finale of the film may go on just a little too long, ‘Don’t Breathe’ is watchable, dark and a whole lot of fun. It’s just not quite the horror flick it is billed as.
Jane Levy leads the cast as Rocky; a young woman with nothing to lose and everything to gain by getting away from her abusive mother and making a fresh start. Rocky is plucky and smart, and her tenacity in getting the job done is the backbone of the film. Dylan Minette plays Alex, a young kid whose father works for a home security company, and accidentally gives his son access to these homes by keeping the keys in their home. Minette has already proved he is good at running away from things in ‘Goosebumps’ earlier this year, and carries on his likeable fleeing skills in ‘Don’t Breathe’. Daniel Zovatto has a small role as a character named Money, whose brash behaviour starts all the trouble in the first place, and Stephen Lang dials up the creepy as the Blind Man whose house the kids invade.
Screenwriters Fede Alvarez and Rodo Sayagues have created an intense and claustrophobic film that does not tell us a huge amount about the characters’ history, but gives us enough of a reason to root for them due to a secret the Blind Man is keeping in his cellar. Setting the film in a dying city adds a layer of creepiness, and although the secret that the Blind Man is keeping verges on the slightly ridiculous, it does up the stakes for all the characters, which is sort of the point. Alvarez and Sayagues keep their central cast guessing, and throw them from crisis to crisis as thy begin to realise how hard it is to get out of a house, and how strangely difficult it is to hide from a blind man.
As director, Fede Alvarez ramps up the tension in the film right from the beginning, as the kids get away with a seemingly difficult burglary, before moving onto one that should be easy as pie. The performances from the cast also help to up the ante, as he audience is on their side from the start – even when it is not quite clear if we should be – and their terror at how quickly things go bad is infectious. There are times when the film does feel rather laboured, and there is so much to-ing and fro-ing in the final moments of the film that it is easy to lose patience, but ‘Don’t Breathe’ is a smart and scary thriller, which creates all of its scares from a very simple, but effective premise. We could have just done with a few less instances of Chekov’s gun/hammer/harness though.
In all, ‘Don’t Breathe’ is a smart and claustrophobic thriller, with plenty of scares and some shocking twists. The film does run out of steam a little toward the end, but for the most part it is gripping, fearless and gleefully dark.
RATING: 4/5
Review by Brogen Hayes