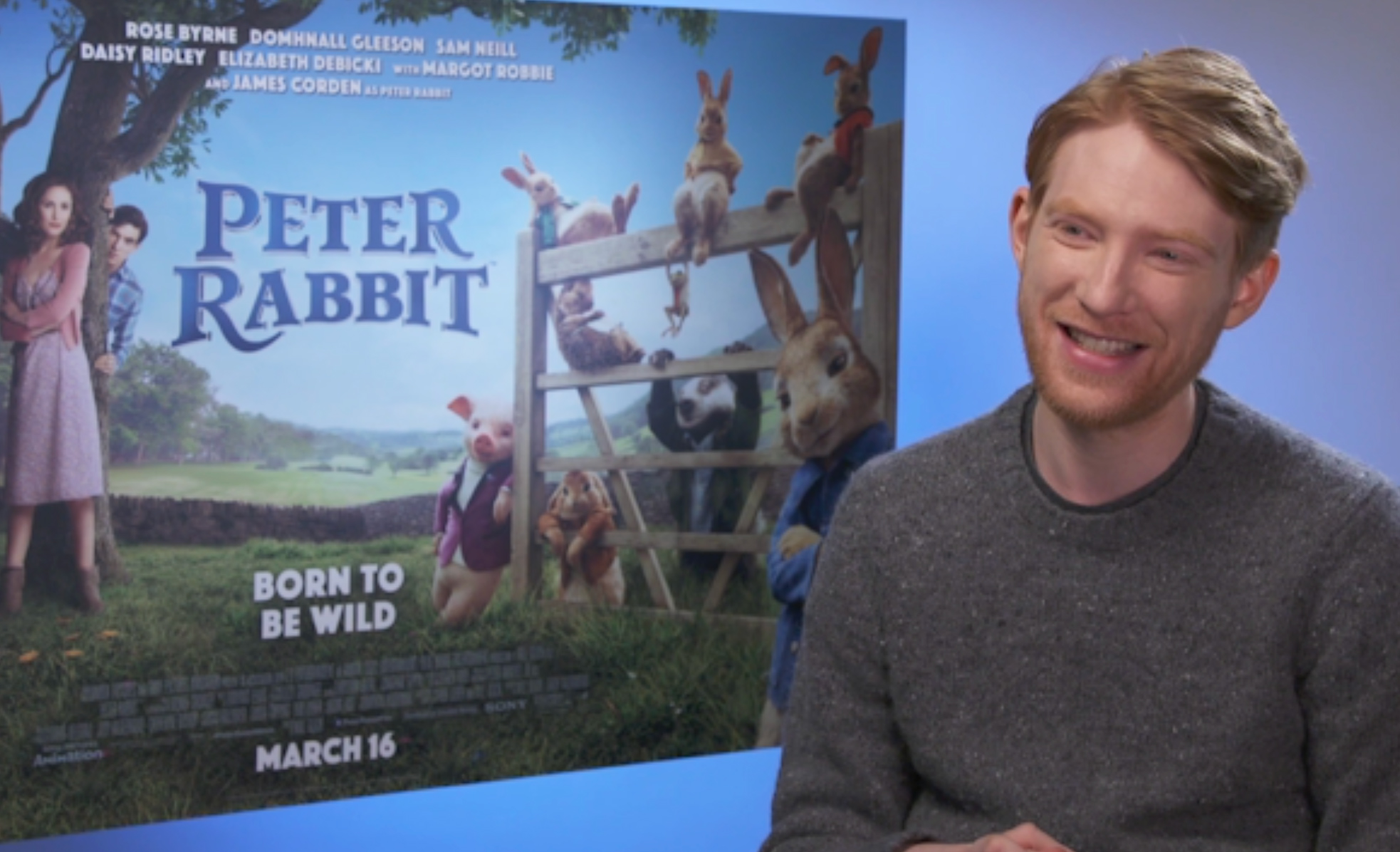 Domhnall Gleeson stars in ‘Peter Rabbit’, a 3D live-action animation about a mischievous rabbit, his sworn enemy Mr. McGregor, and Bea, the woman who brings out the best in both of them. We caught up with the Irish actor to chat about playing the bad guy who gets beaten up by bunnies.

Domhnall, You play Mr. McGregor, who is a curmudgeonly figure, Tell us about your attraction to this character, and what made you embrace your inner old man?

Well we’ve all been there! We’ve all lost out jobs to people when we thought we’d do the job better, and he’s just frustrated, you know? He feels like life hasn’t given him what he’s worked very hard for, and everyone has felt like that. But he also has this kind of pernickety side to him, where he’s unable to be rational about these things, so he becomes a little bit irrational by the time he moves down the country. And he’s a perfectionist, so those two things don’t go well together.

We’ve seen you navigate different kinds of villains – here you’re a funny villain who gets a a redemption arc, we’ve seen you play scary in ‘Star Wars’, then really disturbing in films like ‘Calvary’. Do you approach them completely differently depending on the tone, or do you have to find the truth of the character every time?

I think you want to have fun being basically every character. I think the times where I have not been great in films is where there’s a lack of a sense of humour in there somewhere. But they’re all very different people, coming from different places and also, you don’t really think of them as villains, really. You’ve got to figure out why you like them, and why you would like to live in their skin for a while. So yeah, the same way you think of any character being different to another character, it’s the same with playing the guys who can secretly be called bad guys, I suppose.

But surprisingly, this was one of the most physically rough shoots you’ve had in a while!

When you see the film it may not be surprising, he gets knocked around quite a bit – he gets knocked into walls and fired off buildings, and steps on a lot of rakes. He has a tough time of it. The director was keen for me to go all in. He was keen for it to be be me who was blasted off walls and off the roof. That was half the fun though, I hadn’t done that kind of silly, ‘Home Alone’ style stuff before, but I’ve always loved it in films, so it was nice to give it a shot!

You do pay homage to The Simpsons’ Sideshow Bob rake scene – is that just because you have red hair?

I don’t know! It’s just striking me now that it may have been the reason and I may have to call to complain! But no, I don’t think so, it was either that or stepping on hoes and rakes won out in the end!

Tell us about working opposite CGI bunny rabbits who aren’t there, how difficult is that?

It’s bizarre, there’s no two ways about it, it’s  really strange! And luckily, one of the conceit of the movie is that we don’t think they can talk, we just think they wear jackets and hang about, so at least there wasn’t a lot of dialogue with them, but the fight scenes and stuff were really hard. You do so many versions of a blue bunny, then nothing there,  then a mime and you’re doing back to drama college stuff, so it was really really odd! But I enjoyed it when it was going well – and then the times where they would be saying ‘No, your hands would really be working around him like this’, you’re just like ‘Oh I can’t do this anymore’, so that was less fun!

Throughout the film the rabbits play pranks on you, but in real life on set, the crew shoved you in a  fridge. Please explain?

They did, yeah! The fridge was there because I don’t deal with the heat particularly well. If you can’t stand the heat, get out of Sydney, because that’s where we shot it. It was just crazily shot, and it was a lot of outdoor running around and sprinting, all day, for ten, eleven hours and I didn’t deal with it all that well, I’ll be honest with you! So they used to put me in a room called the fridge, to dry my clothes out because I would sweat through every take!

Next you’re working with Lenny Abrahamson on ‘The Little Stranger’, what can you tell us about that?

It’s a ghost story, in a big old English house and there’s a lot of darkness to it, it’s quite fraught with a very strange energy to it and a few scares along the way – but then it’s a Lenny Abrahamson film, so it’s also brilliantly psychological.