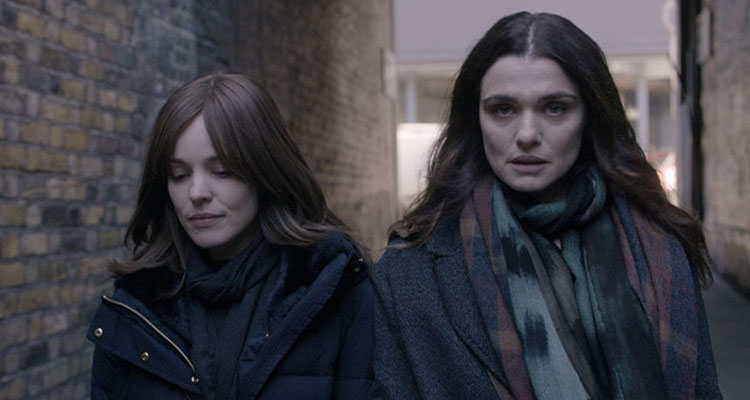 In short: Rebels with a cause

The Plot: Photographer Ronit (Rachel Weisz) is living a carefree life in New York. She left the UK for an initially unspoken reason that caused family ruptures. She’s called back to London when news arrives about Rabbi father Rav (Anton Lesser). He died suddenly while giving a sermon on the difference between obeying and the ability to choose. Ronit arrives home to her Orthodox Jewish family and re-connects with old friend Dovid (Alessandro Nivola). He is now married to Esti (Rachel  McAdams), Ronit’s childhood friend… and later secret lover. The presence of Ronit stirs up those old feelings in Esti, who has put aside her sexuality to conform to her religion’s expectations of a conventional marriage. As the two spend time together, Dovid gets caught in the crossfire and this Jewish family will have to confront the true nature of Ronit and Esti’s relationship…

The Verdict: It’s taken quite some time for Sebastian Lelio’s follow-up to his Oscar-winning A Fantastic Woman to reach our shores. Disobedience first debuted at the Toronto International Film Festival in September 2017, but the long wait has certainly been worth it. Based on the novel by Naomi Alderman and adapted here by Lelio and Rebecca Lenkiewicz, Disobedience is a film that confronts the conflict between religious conservatism, societal obedience and the irrational passions of the human heart when in love. Setting the story in London’s Orthodox Jewish community, where faith is at the forefront of these characters lives, is a move towards understanding the constraints and expectations of a community towards its members.

Conformity is expected. Rebelliousness is frowned up. When Ronit arrives back, she’s asked by her elders why she isn’t married yet. She’s very much her own person, a stark contrast to Esti who settled for a conventional life. That personality contrast is well-played by the two Rachels here, who give subtly complex performances – among the finest of their already impressive careers. They’re full-bodied performances, all longing glances at first which, after a long spell, then finally break out into full-on physical passion (the two Rachels don’t hold back here either). Ronit has a naturally rebellious streak, but the real surprise here is Esti. She’s more pro-active in pursuing her hidden passions for Ronit than initially appears. Lelio’s slow build-up rewards audiences with thoroughly well thought-out plot developments.

It’s also worth mentioning Nivola’s character Dovid. An essentially decent man of faith, who is being groomed for a position as the new Rabbi, he finds himself at odds with Esti’s true feelings. She’s slipping away from him at a crucial moment in their marriage. This love triangle takes some interesting turns and Lelio is careful enough not to make Dovid a victim of circumstance. Nivola’s fine performance is certainly equal to that of his two co-stars. His speech to his new congregation later in the film is a stand-out sequence, spoken from the heart rather than from the head. There’s a lot to enjoy in this thought-provoking glimpse into an enclosed community’s lives, but it’s the sensitive and well-calibrated performances that are particularly memorable. ‘To thine ownself be true’ said Shakespeare. These rebels with a cause characters would no doubt agree.