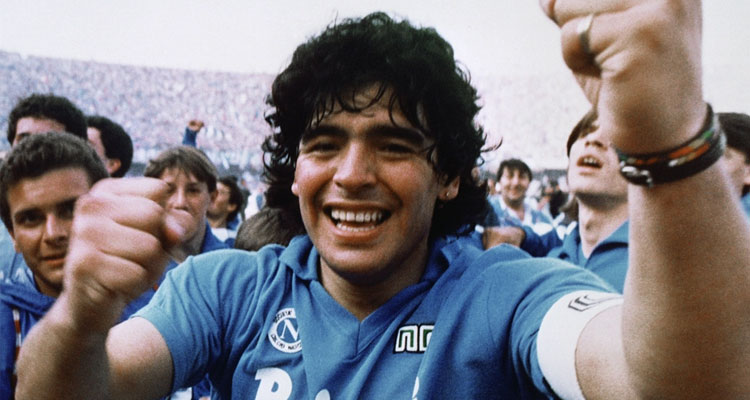 The Plot: He came from a dirt-poor village in Argentina, the youngest of five children. But Diego Maradona knew that he was destined for greater things – on the world stage of both club and international football. Fame beckoned and in 1984 he was sold to S.S.C. Napoli. He was then the most expensive and best footballer in the world, but ended up in Italy’s poorest city. S.S.C. Napoli had never won a significant trophy and were looked upon as the inferior rival to Northern clubs like Juventus. Maradona certainly shook things up though and over the next seven years, he become both the most loved man in Napoli… and the most hated man in Italy. His seemingly God-given talent with a football made him a star – but at what cost to his personal life?

The Verdict: Oscar-winning British documentarian Asif Kapadia doesn’t make documentaries in the conventional way. He eschews talking heads and commentary from experts to instead use archival footage to tell his subject’s story through his or her own eyes. His riveting analysis of Formula 1 legend Ayrton Senna was followed by a soulful post-mortem of what really happened to another tragic member of The 27 Club, Amy Winehouse. He completes his trilogy of documentaries about the price of fame with a living legend this time around – one Diego Armando Maradona. As Kapadia explains it, he sees the film as a portrait of two people: Diego, the charming, affectionate man who enjoyed his fame and adulation; and Maradona, the footballer who succumbed to those very excesses of fame to his own downfall. As the poster describes him: Rebel. Hero. Hustler. God.

Kapadia could easily have focused on Maradona’s World Cup legacy, including the infamous ‘Hand Of God’ moment against England in the 1986 World Cup in Mexico (something which Maradona has no regrets about, to this day). Instead, the World Cup only forms part of this particular story. The framing device is Maradona’s relationship with Napoli, both the club and the city. He arrived to a greeting of 85,000 people and quietly left seven years later through the back door to return to Argentina. It’s that unique relationship with Napoli and the tumultuous fallout with the rest of Italy that is the meat of this story. What made this hugely talented footballer so adored that Neapolitan families put his photo beside that of Jesus in their homes? Football can incite the most fervent passions in people, but Maradona broke the mould and achieved a God-like status.

The film is assembled from over 500 hours of footage, much of which has never been seen and comes from Maradona’s own personal archive. There are some real gems in here, like crowd reactions from his perspective or a rowdy arrival press conference in which concerns about the local mafia, the notoriously ruthless Camorra, are deflected. That’s an interesting pick from Kapadia, because the Camorra comes into Maradona’s life in a big way later on when his drug abuse becomes more apparent. There are some occasional thoughts from heard-but-not-seen contributors like historians, ex-girlfriends and his wife Claudia.

Maradona is such a larger-than-life character though that he deserves his own stage. Kapadia duly grants him an audience through a skilfully-edited portrait of what makes the man tick, both on and off the field. It’s not exhaustive and there are other aspects of his life that are only briefly touched upon, like his relationship with his estranged son from another relationship. However, the connecting thread of Napoli is enough to suggest that this was the defining period in his life and justifiably deserves the most attention. Kapadia’s keen eye for detail along with both admiration for and distance from his subject results in an insightful and entertaining documentary film. Like Senna and Amy, Diego Maradona is accessible for those who might not know much about its subject. Kapadia has completed a suitably divine hat trick here and scored another hit that simply demands to be seen.