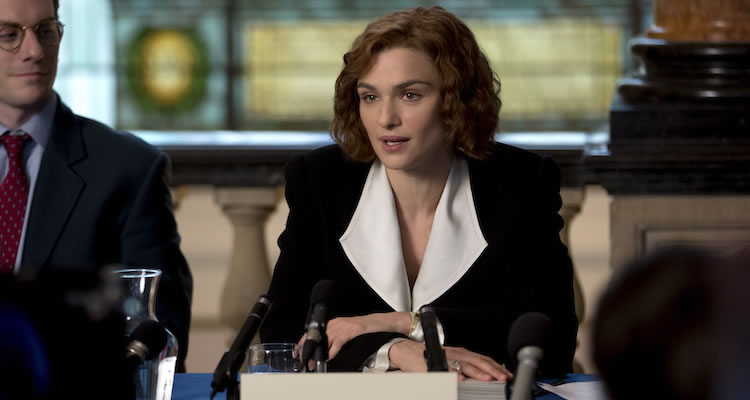 DENIAL (UK | USA/12A/109mins)
Directed by Mick Jackson. Starring Rachel Weisz, Tom Wilkinson, Andrew Scott, Timothy Spall, Mark Gatiss.
THE PLOT: In 2000, writer and historian Deborah Lipstadt (Rachel Weisz) found herself defending her work on those who deny the Holocaust, when self-proclaimed historian and Holocaust denier David Irving (Timothy Spall) took a defamation case against her the UK. Since in the UK, those accused of libel are presumed guilty until proven innocent, Lipstadt and her team found themselves in the unusual and confounding position of having to prove that the Holocaust actually happened.
THE VERDICT: Written for the screen by David Hare – whose last cinematic outing was the Kate Winslet film ‘The Reader’ – and directed by Mick Jackson who, after ‘The Bodyguard’, has not directed a film for the big screen since ‘Volcano’ in 1997, ‘Denial’ is a new take on a courtroom drama. While it is almost impossible to tell this true story without stepping into court, ‘Denial’ has the unusual focus of defending history in terms of a libel case.
The cast of ‘Denial’ features Rachel Weisz, Andrew Scott, Tom Wilkinson and Timothy Spall, and they all do well with their roles in the film. Weisz makes Lipstadt a powerful and outspoken woman, Scott does well with making solicitor Anthony Julius a rounded and tenacious character, Tom Wilkinson plays barrister Richard Rampton as a gentler and softer character, who is an intimidating and smart force in the courtroom, and Timothy Spall, although he has plenty of chances, never truly makes David Irving out to be a buffoon, or on the wrong side of history, more a misguided man whose opinions and views are outdated, racist and often wrong, but he has the courage to stand by his convictions.
David Hare’s screenplay focuses on the courtroom drama at the heart of the story, although there are times when the film journeys to Auschwitz and the US for the sake of research and making the story more interesting in the telling. The central conceit of the film – how do you prove something that every right thinking member of society knows to be true, and has been proven before – is a fascinating one, and it is in the proving that the story and drama of the film emerges. There are strong lines of dialogue throughout the film, and the balance between the human frustrations of the defence team, and their professionalism gives steadiness and credibility to the film.
As director, Mick Jackson does best when he is directing the courtroom scenes. These are tense and well constructed, and in making Deborah Lipstadt the incredulous heart of the film, the audience roots for her, and for her telling of the truth to win the day. There are times when the pacing of the film drops however, and although the central idea of the film is a fascinating one, the film ends up as another courtroom drama; a format that we have seen many times before.
In all, ‘Denial’ has a fascinating idea at its heart; how do you prove that the truth is true? The cast do well in their roles, but in not being able to move ‘Denial’ out of the courtroom, it ends up being a well acted but familiar, if solid and engaging, story.
RATING: 3.5/5
Review by Brogen Hayes