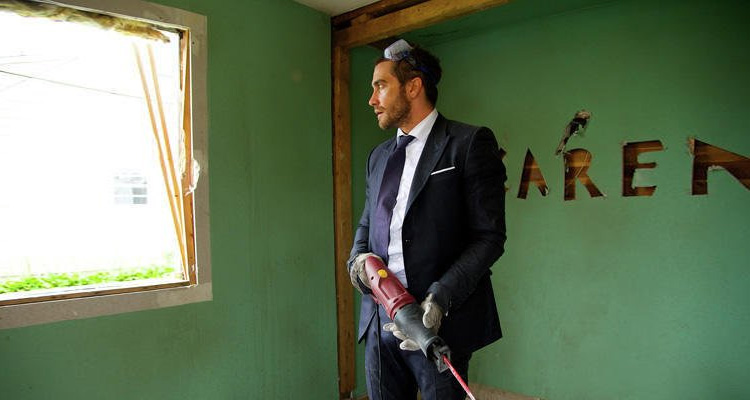 DEMOLITION (USA/15A/101mins)
Directed by Jean-Marc Valleé. Starring Jake Gyllenhaal, Naomi Watts, Chris Cooper, Judah Lewis, CJ Wilson.
THE PLOT: After his wife is killed in a car crash, which he escapes without a scratch, Davis’s (Jake Gyllenhaal) grief takes a strange form. When a packet of peanut M&Ms gets stuck in a vending machine, Davis finds himself writing long, confessional letters to the company’s customer care department, and taking some advice from his father in law quite literally, he begins dismantling household objects that no longer work.
THE VERDICT: After the success of ‘Dallas Buyers Club’, and the acclaim for ‘Wild’, director Jean-Marc Vallée returns with a tale of grief and friendship in ‘Demolition’. Jake Gyllenhall stars as Davis, and brings some quiet concentration to the role. Davis spends much of the film revelling in his new-found honesty, and it is this honesty that makes Davis such an intriguing character. Well this, and the fact that the character takes delight in pulling things apart with no intention on putting them back together. Gyllenhaal does not shy away from the strangeness of his character, instead enjoying the chance to tell a different story of grief and coping.
Naomi Watts plays Karen, the woman in customer care who receives Davis’ letters, and decides to call him in the middle of the night to talk. The friendship that springs up between the two is warm and sweet, as these two obviously broken people try to find comfort in the time they spend together. The rest of the cast features Chris Cooper, Heather Lind, Polly Draper, Judah Lewis and C.J. Wilson.
Bryan Sipe’s screenplay is an examination of the different ways that people deal with grief; Davis finds it easy to talk to a stranger about his problems, while acknowledging the delight that the character takes in pulling things apart. When Davis and Karen are simply writing to one another and talking on the phone, this is when the film is at its best. When the two meet however, the film takes an abrupt emotional turn that is less engaging than what has gone before. The metaphors run strong with this one, but the idea of Davis pulling everything apart in order to put his life back together works in the context of this strange, endearing film.
As director, Jean-Marc Vallée allows Davis to struggle with his lack of emotion, and takes the audience on an odd emotional journey that is filled with the lead character’s numbness. The rest of the performances are strong and engaging, with each character relatable, if not always easily understood. The pacing of the film is an issue however, as the weird intrigue of the story drops when Davis and Karen meet, meaning the film feels like it is indulging Davis’ strangeness, rather than allowing him to move forward. That said, the scenes of gleeful destruction are fun to watch, and while Davis takes a while to come through this emotional journey, the payoff is strong when he does.
In all, ‘Demolition’ is an odd, engaging and sweet film, anchored by Gyllenhaal’s gleefully strange character. The metaphor may be a little forceful, but this tale of a man trying to find a way to grieve is funny and sad in equal measure. It’s just a shame the pacing drops in the middle of the film, and the endearing oddness evaporates from time to time.
RATING: 4/5
Review by Brogen Hayes