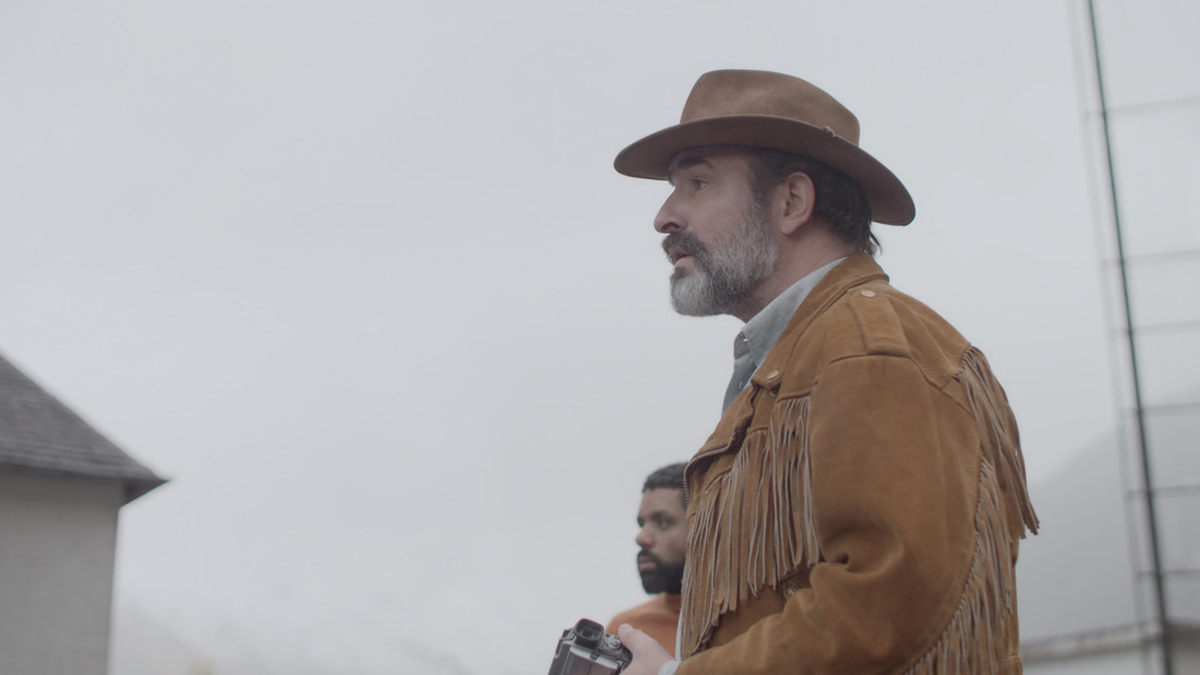 The Plot: When presented with a designer deerskin jacket, it’s love at first sight for filmmaker Georges (Jean Dujardin). He’s immediately taken with the way it looks and how it snugly fits him. It’s going to cost him though – in more ways than just the monetary value. Arriving in a quiet provincial mountain town, he becomes a nuisance as he declares that his deerskin jacket is the only jacket in the world that matters. He sets out to con people in taking off their jackets for his filming and then steals them with the intention of destroying them. The only person who understands all this is waitress and aspiring film editor Denise (Adele Haenel), who is amazed at his footage and sets out to support him…

The Verdict: Following hot on the spinning wheels of last week’s Jumbo, we have another French film that focuses on objectophilia. There must be something in those Volvic bottles, particularly when an actual Frenchwoman wanted to marry the Eiffel Tower. Whereas Jumbo was a sweetly innocent love story between a young woman and a 25-foot amusement ride, Deerskin goes in the other direction and plays it straight for purely demented reasons. Not since Nicolas Cage donned his snakeskin jacket in Wild At Heart have we had a film that lavishes such attention on a jacket. Objects can take on a dangerous life of their own, as In Fabric demonstrated recently. As lead character Georges dotes over his deerskin jacket and gradually converts the rest of his wardrobe to deerskin gear, it becomes clear that either he’s lost his marbles or the jacket is exerting a malign influence.

It could only be un film de Quentin Dupieux. Having previously directed his beady camera towards a homicidal car tyre in Rubber, he obviously has a thing for offbeat tales involving obscure objects of desire. His script is initially pared-back, leaving Georges more of an outline character. It’s enough to know that he’s a filmmaker, his marriage is in crisis and he’s nearly broke. It’s when he puts on his deerskin jacket that he becomes more alive and attuned his darkest desires, disagreeing harshly with anyone who isn’t onboard with his world view – including the kid he throws a brick at. No other jacket in the world should exist apart from his own. Is he wearing the jacket or is it wearing him? Dupieux doesn’t quite fall on either side, leaving it to the audience to determine Georges’ mental state as he turns to crime and goes on the rampage.

It’s all delightfully oddball in a slyly-amusing French way, with Dupieux coaxing a game performance from Jean Dujardin. He may have won an Oscar for something safe like The Artist, but Dujardin isn’t afraid to take risks with his career. Now sporting a graying beard, he bears a certain resemblance to Eric Cantona. He throws himself into this more obscure role with aplomb, obsessing over a jacket rather than the beautiful game. Georges’ beautiful game is a film that is already being edited in his head as he films it. Cinéma vérité indeed. It helps that Adele Haenel tunes into Dujardin’s wavelength to complement his performance. It would be easy for Georges to become a ranting madman, but Haenel subtly adjusts her scenes with Dujardin so that Georges is more of an identifiable eccentric. There isn’t a huge amount of plot or any great revelations here. It ends abruptly and is suspiciously short at 77 minutes – though it doesn’t overstay its welcome. Dupieux is more concerned with creating an off-kilter but amusing atmosphere and a reverent aura around the deerskin jacket. He just rolls with it and that’s enough to warrant a light recommendation.