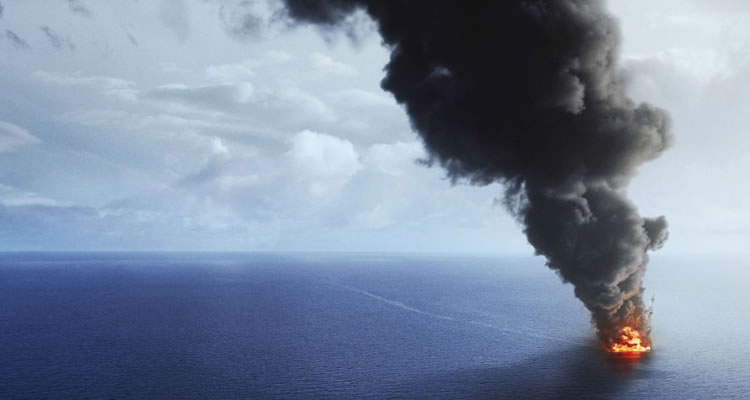 DEEPWATER HORIZON (USA12A/107mins)
Directed by Peter Berg. Starring Mark Wahlberg, Kate Hudson, Kurt Russell, John Malkovich, Gina Rodriguez
THE PLOT: In April 2010, the biggest oil spill un US history began with an explosion aboard the offshore drilling rig, the Deepwater Horizon. Mike Williams (Mark Wahlberg) returned to work on the rig not long before the accident, and struggled to get as many people off the rig alive as he could, while trying to stop the disastrous chain of events that had been set in motion.
THE VERDICT: With the actual event of the Deepwater Horizon disaster only six years old, it is, in some ways, surprising that this film has been made so quickly. Especially when considering that the film turns into a typical disaster movie, and pays little heed to the ecological disaster that followed. The original article that the film is based on sets its sights firmly on the events on the rig and the people involved, but without telling the tale of the following 87 days, it feels as though the story is only half told.
Mark Wahlberg leads the cast as Mike Williams, whose real life testimony into the inquiry as to why the rig exploded opens the film. Wahlberg makes the character likeable and loyal, and some of his interactions with other characters on the rig feel natural and strong. Kate Hudson has a smaller role as Mike’s wife Felicia, and is joined in supporting roles by Dylan O’Brien, Ethan Suplee, Gina Rodriguez and James DuMont. Kurt Russell plays Jimmy Harrell, rig boss, while John Malkovich forms the closest thing the film has to a villain, as BP employee Vidrine.
Matthew Michael Carnahan and Matthew Sand’s screenplay was inspired by David Rohde and Stephanie Saul’s article for the New York Times; Deepwater Horizon’s Final Hours, and as such, focuses on the final hours of the rig before the explosion and resulting fallout. In order to tell the story of people, the writers focus on Mike Williams, and it is through his eyes that we see much of the action. The information the audience needs to know to understand the catastrophe is presented well; simply and clearly, but the characters suffer from simply being there as vehicles for the story. The screenplay paints Malkovich’s BP executive as an oily (sorry) bad guy, with the real villain being lack of maintenance and indecisiveness; the blame still landing squarely on BP’s shoulders.
As director, Peter Berg has created a film of two halves; at first ‘Deepwater Horizon’ is a film that focuses on characters and their relationships, but this all falls apart in the second act when the disaster element of the film kicks in. The only things we learn about the characters are that one has a car, and another a family, and this is not enough to consider the characters to be rounded. Of course the audience is going to root for the people on the rig since they are trapped aboard a burning barge – for all intents and purposes – but although ‘Deepwater Horizon’ claims to be a film about the people, we never truly get to know them. As well as this, giving little focus to the following 87 days when oil and gas continued to leak into the Gulf, after the ‘Deepwater Horizon’ sank, feels like we are only getting half of the story.
In all, ‘Deepwater Horizon’ tells the story of what happened on the doomed rig on April 20th 2010, but never manages to round the characters out fully, and ignores the events that happened afterwards. The first half of the film is fun, and the sense of doom builds nicely, but once disaster hits, it feels as though we have seen all of this before. There needed to be more told on the after effects of the spill – as was done in 2012’s ‘The Big Fix’ – and this leaves ‘Deepwater Horizon’ feeling familiar, unfinished, but gripping in places.
RATING: 3.5/5
Review by Brogen Hayes