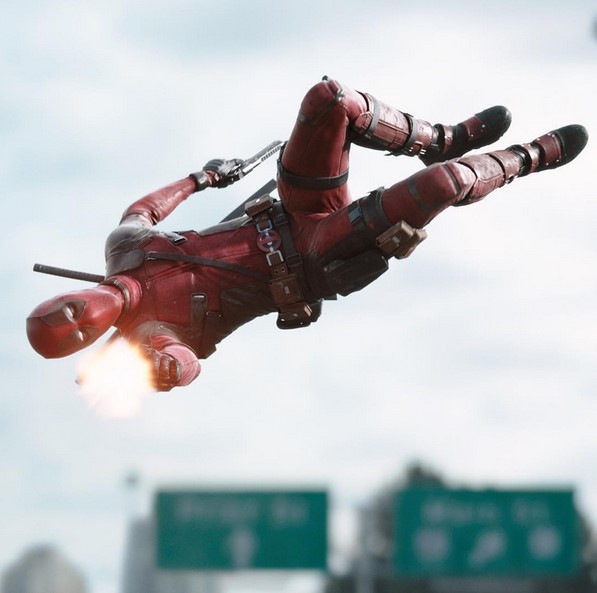 DEADPOOL (USA | Canada/16/108mins)
Directed by Tim Miller. Starring Ryan Reynolds, Morena Baccarin, TJ Miller, Gina Carano, Ed Skrein, Stefan Kapicic, Brianna Hildebrand.
THE PLOT: When mercenary for hire Wade Wilson (Ryan Reynolds) is diagnosed with terminal cancer, he decides to take a chance on an experimental treatment that will activate any mutant genes lying dormant in his system. Although the treatment is successful, Wilson – now going by the name of Deadpool – believes his life and chance at happiness with Vanessa (Morena Baccarin) is destroyed, and sets out to take his violent and bloody revenge.
THE VERDICT: Although fans have been waiting for the big screen story of the Merc with a Mouth since Wade Wilson’s appearance in 2009’s ‘X-Men Origins: Wolverine’, but the film has actually been stuck in development hell since 2000. Now that the film is finally here, the question remains, is it any good?
Ryan Reynolds obviously has a whale of a time as Wade Wilson/Deadpool. Not only does he get to be snarky and smart, he also talks a mile a minute, gets to kill a lot of bad guys in increasingly violent ways, and eventually and predictably, save the day. Although this time, the day saving is personal and not one on which the fate of the world relies. Morena Baccarin has very little to do as Vanessa, other than be a hooker with a heart of gold, a challenge to Wilson as a girlfriend – ‘Your crazy matches my crazy’ – but then quickly fall into the role of damsel in distress. Ed Skrein has some fun as bad guy Ajax/Francis, TJ Miller becomes Deadpool’s best friend and verbal sparring partner and Gina Carano plays Angel Dust. X-Men Colossus and Negasonic Teenage Warhead also make appearances, played by Stefan Kapicic and Brianna Hildebrand.
The story, written for the screen by Rhett Reese and Paul Wernick, with input from Ryan Reynolds, starts off being unusual and fun, but quickly falls into the standard flow for a superhero movie – yeah, I know, Deadpool ain’t no hero, but you get the point – with the final set piece destroying acres of the city and ending with a kiss for our ‘hero’. The screenplay tries to be smart and self aware with plenty of nods to Reynolds himself and his previous heroic outings, as well as pop culture and the fact that the X-Men Universe storyline changed after the events of ‘Days of Future Past’. This starts off well, but eventually begins to grate, as does Deadpool’s desire to talk through any moment of silence the film throws up. As well as this, the women of the film do not come out well, with Negasnoic Teenage Warhead constantly belittled, Angel Dust unable to fight without her top falling off and Vanessa being reduced to a dame to be rescued.
Director Tim Miller keeps the set pieces big and loud, and handles the romance between Wade and Vanessa rather well, but once the story kicks off properly Vanessa is thrown to the background in favour of Deadpool’s penchant for sex and violence. The pacing of the film is fine – and it is blissfully short – but once the final set piece approaches, the film falls into familiar territory, with even the retro and anachronistic music choices feeling rather like they were pulled from ‘Guardians of the Galaxy’.
In all, ‘Deadpool’ succeeds at being ‘Kick-Ass’’s grown up older brother, but does little to feel fresh and exciting after the first act. Reynolds has a ball with the title role – although there are times when less talking would definitely be more – but every other character is sidelined, with the women coming off particularly badly. Still the soundtrack is good, and there is some fun to be had with a lot of ‘Deadpool’; the fans will love how faithful the film is to the character, but the uninitiated will wonder why this backward looking film was not updated to feel more inclusive of the audience as a whole.
RATING: 3/5
Review by Brogen Hayes