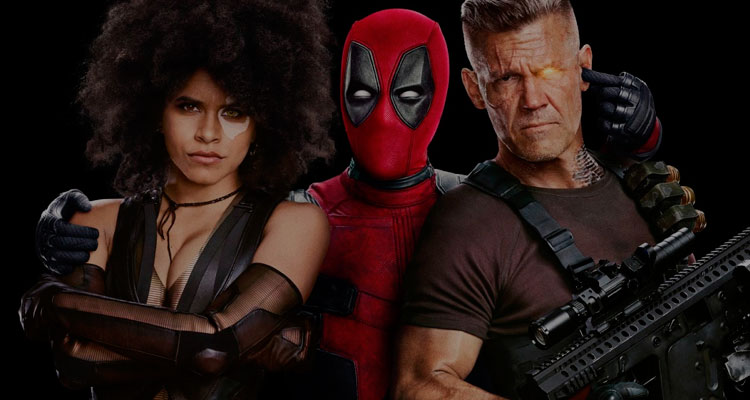 DEADPOOL 2 (USA / 16 / 119 mins)
Directed by David Leitch. Starring Ryan Reynolds, Josh Brolin, Julian Dennison, Zazie Beets, Morena Baccarin, T.J. Miller.
THE PLOT: Wade Wilson AKA The Merc With A Mouth AKA Deadpool (Ryan Reynolds) is back – and you better believe it. Having juiced himself up for declaring war on all the bad guys around, he finds himself inducted into the discriminatory X-Men (why not X-People?) as a reluctant trainee. He comes into contact with trouble mutant kid Ricky Baker, sorry, Russell (Julian Dennison). Time-travelling cyborg from the future Cable (no relation to the T-800 and played not by Thanos himself, Josh Brolin) is gunning to take out the kid himself. So, Deadpool puts together his own gender-neutral team, X-Force, to get to the kid first. Can our favourite spandex-wearing motormouth restore peace and justice to the galaxy… and find time for another chimichanga?
THE VERDICT: Re-booting ‘Deadpool’ two years ago as a foul-mouthed, flying-solo kind-of-superhero was a stroke of genius. He was just what the well-worn modern superhero genre needed – a self-referential, fourth-wall-breaking motormouth who poked fun at the genre and his budding bromance with the now-lamented Wolverine. That’s where we catch up with ‘Deadpool’, before breaking into a hilarious Bond-style title sequence. That’s just for starters, as the ante has very much been upped here.
While the first ‘Deadpool’ film was certainly fun, it didn’t hit all the marks. For one, the character still felt like he was finding his feet (a gag that proves to be quite literal this time around). Also, it suffered from an ineffectual, sneering villain. It’s with a weary sigh of Colossus relief that this sequel proves to be that rare thing – better than the original. Who at 20th Century Fox and Marvel saw that one coming? So yes, it’s the Aliens of Deadpool sequels, with our hero playing Ripley – sort of. ‘Deadpool’ is more sure-footed and confident, thanks to the razor-sharp script by Rhett Reese, Paul Wernick and now a credited Reynolds.
The other strength of the sequel’s script is that it gives Deadpool more purpose this time around and has a bit less of the navel-gazing. It also takes some commendable risks, with some surprise turns early on. There’s a commanding foil in Cable, a complex Cyborg on a guilt trip. For the second time this summer, Brolin brings some humanity to an inhuman character. Reynolds has his now trademark character down to a T, but he’s also complimented by a supporting cast who respond in kind (Zazie Beets lucky ‘superhero’, in particular).
Director David Leitch takes over from Tim Miller and injects some of that frenetic, ball-busting action from last year’s ‘Atomic Blonde’ – while never taking the title character or the film itself too seriously. After all, this is a family film according to our hero – just no talking animals, of course. It’s silly, crass, frequently funny and nearly all the jokes are on target. The mid-credits scene goes even further than the first film in Reynolds making fun of himself. ‘Deadpool 2’ takes risks, but it pays off handsomely and is dead on – even for a pizza-faced superhero. ‘Deadpool 3’? Yes please – Reynolds is just warming up here. There’s plenty more vroom in this character.
RATING: 4 / 5
Review by Gareth O’Connor

Review by Gareth O'Connor
4
Dead on