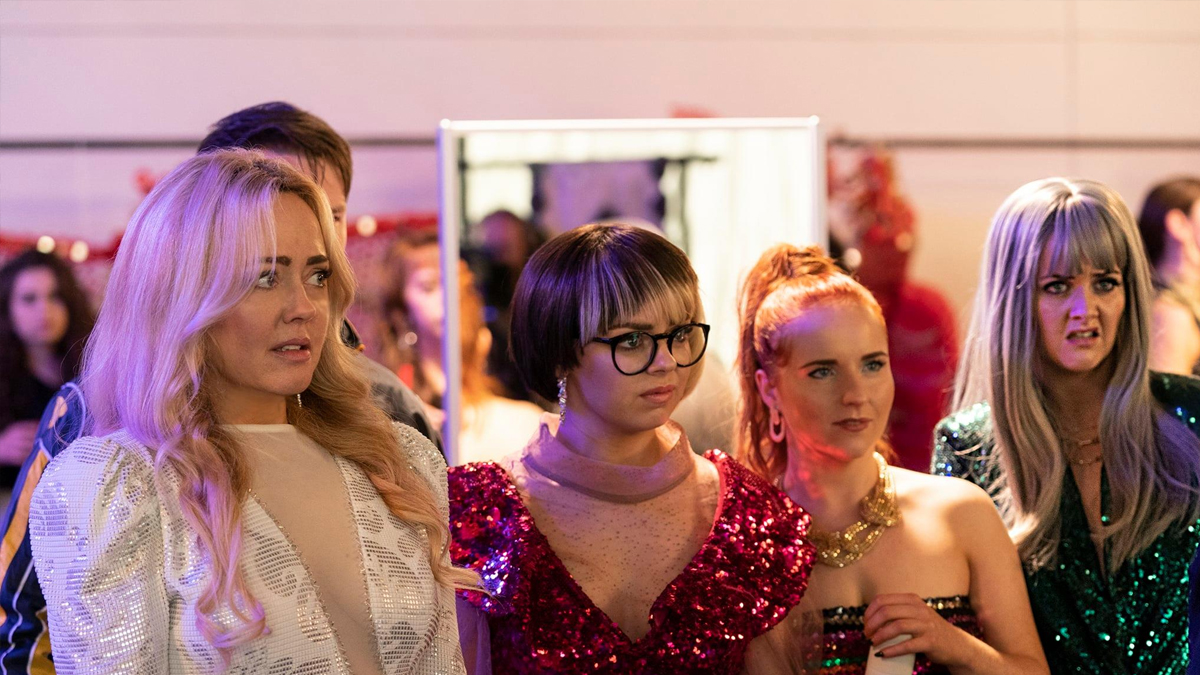 Do you remember your first reaction when reading the script?
I have to play this. There’s only there’s been a few occasions, where I kind of get this instinctual feeling… it’s one of those jobs where you think I will move hell and high water; I must do this. I was instantly Michelle. After the first couple of scenes, I was like, right, I’m Michelle.

I just found it refreshing and funny. And Rachel (Carey) is not afraid to go there in terms of the language or the one-liners, but also in terms of what’s happening to authentic Dublin and North Side, especially working class. You’ve got the uplifting element of the comedy, and then you’ve got the little underbelly, of the undercurrent of what’s kind of happening around Dublin, or anywhere really around Ireland, that places are being demolished and communities are being destroyed for Costa Coffees and all.

We hear that your character was written especially for you?
Yeah, Rachel (Carey) sent me an email saying that she wrote it with me in mind, and I hope she did, and it wasn’t just lies to get me, it’s a huge compliment. I was deeply flattered. And not only that, I mean, delighted that it was good, you know? So from that kind of day onwards I was thinking of ways to play Michelle… Somebody also told me to watch ‘The Salon’ in Ireland, this thing, this is a show about hairdressers, and I did watch a bit of that. So that helped me a great deal.

What was it like to build rapport with the other girls Ericka, Shauna and Lauren?
Well, what is amazing about it is we just gelled straight away. And Lauren and Shauna, ironically, they come from the same area that I come from and Dublin, I come from Cabra. There was a big – Oh, my nanny knows you, I and used to work with your aunt and all of this. And so there was that kind of camaraderie and that kind of all uncovered you.

And with Ericka, she knew a friend of mine. So, we kind of knew people independently but by friends through friends. They were just lovely. We shot in a salon in Loughlinstown. It was as if we were living in the salon. I couldn’t wait to get my hands on a pair of scissors, but they didn’t give them. It felt real, it all felt very real. Even down to the extras, they were amazing. You know, Fair play to the hair and makeup.

I mean, especially here because it’s about to just really, go for it. It’s camp, but you’ve also got the darkness there as well. So it was, I think you can tell with a film, when you have fun making it, it just seeps through the screen.  I think you can tell there was a lot of laughing, And I am including Rachel, the director in that. Our assistant director had to come in and scold us like a school teacher.

You spoke a little bit on the darkness of the film, how was it when the film takes that turn? You have that clash with Deano Ian’s character? What was it like shooting that scene? And you know, going for something darker and more violent?
Well, it was choreographed, thankfully, because we must be obviously safe around each other. But when you have that kind of momentum going and your adrenaline is pumping you up, you go for it. Ian was really frightening when he came in. We were using a lot of energy. It was quite harrowing. Which it can be for people, if somebody comes into your shop and wants money, or you know, and then when, when, I don’t know whether I can say but you know, when the deed happens, it felt real.
Then what to do with him and it’s kind of grotesque, but you know we were working with a kind of fake body. And I don’t know whether we could say that even, but it was realistic. Then thankfully, when we were in some situations, the comedy comes in. And so, Rachel would get our continuity lady who’s from South Africa, and I can’t do the accent, but she’d have to say all these lines like, “ I will in my bullocks”.
I’d just laugh because of her accent. Rachel would throw her these lines, and we would be laughing. So, I think just at the right time, the comedy, or the kind of the light relief comes in.

The film has been shown all around the world now. At this point, how has the press tour been because you’ve gotten to see other people’s perspectives from other countries to an Irish film that maybe they never would have seen?
It’s been amazing, you know, and the great thing about film, I think, when the script is great, when the director is great, when you put all the ingredients together, it can go anywhere. When you’ve got all the ingredients, right, it doesn’t really need much more. You don’t need a €50 million budget. So, you know, it’s really encouraging to see that and knowing I think that we all gave it socks, you know, we gave it 500%. And once you do that, well, that’s all you can do.

Why do you think it’s so easy for audiences to root for hairdressers? I’ve been looking at some of the reviews and they mention this feeling of camaraderie.
They’re a little bit like psychologists, when they go in, people go in feeling awful, if you’ve had a bad day. Hairdressers try their best to not only do your hair, but to fix the person. They listen to you and give advice. They’re the pamper people, and they’re part of your family. I think that’s the great thing. Especially with a hairdressers like Deadly Cuts. It’s like a hub and a community. It’s where people can go and just even get out of the house. I think it’s a bit of escapism with hairdressers.

What do you hope audiences get when they go see it in cinemas?
I hope they get the feel-good factor. I hope they have a giggle on it, that that the lines don’t go too fast over their heads. The lines are quick and fast, but when you go back a second time and get the lines, the lines are hilarious.  I think I’d like them to get the fun element, but also the kind of slightly serious side of that. There are areas you know, of authentic Dublin, authentic areas that are frowned upon, because they’re not chic, they’re not glamorous. But for some people in the community, they really matter. I think to get that, and the fact that the underdog can fight back.

DEADLY CUTS is at Irish cinemas from October 8th