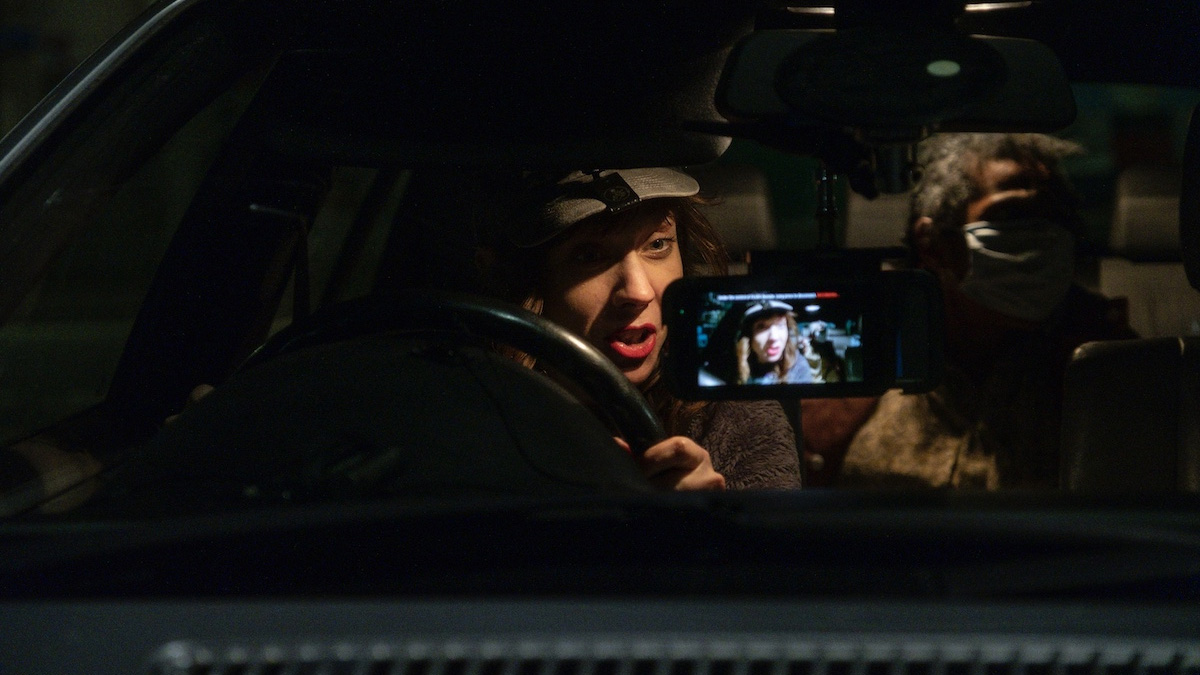 The Plot: American online reality star Annie (Annie Hardy) livestreams an improvised music show from her car’s dashcam, throwing out rhymed lyrics to whatever her online audience suggests. She heads to the UK to hang out with friend Stretch (Amar Chadha-Patel), a delivery driver who finds himself busy during a Covid lockdown. When Annie takes in sick old lady Angela (Angela Enahoro) and the duo attempt to drop her off in the countryside, things soon go off the road and into other territory. Angela is not what she seems and bloody chaos soon ensues…

The Verdict: During lockdown, filmmakers were forced to be creative and use their confined environments to find alternative ways of telling their stories. UK-based director Rob Savage did just that with his Zoom-focused horror Host. Initially appearing on the Shudder platform, it went on to get a theatrical release in the UK and scared up audiences there with its screen-based approach to inducing fear and terror. It wasn’t much good of course, being less than an hour long, dull in spots and saddled with a clunky concept that has yet to prove its worth as a horror sub-genre. However, it did have a few fleetingly good, gasp-inducing scenes which undoubtedly caught the attention of ace horror producer Jason Blum. He’s now teamed up with Savage for his next feature Dashcam. As the title suggests, it’s a road movie cross-breeded with a horror movie and a screen-based concept to become… something else?

It would perhaps be easier to describe Dashcam as The Blair Witch Project on acid. That’s not intended as a compliment though or a quote that can be pulled by the distributor to be plonked on the poster to sell it to unsuspecting audiences. Dashcam goes to the places that The Blair Witch Project didn’t – it shows you everything crazy going on in the woods and beyond, leaving nothing to suggestion or imagination. It’s also equally nauseating in more ways than one, with the rapid Shakycam footage going on hyperdrive to the point where most of the film consists of figuring out just what the hell is going on and where each character is at. It’s headache-inducing viewing, not helped by an obnoxious lead character. Savage and his writing team already set Annie up as a target by making her a Trump-loving, rampant Covid-denier who wonders what rhymes with orange and why British keys are so strange (eh?). It’s hard to get onboard with a character who is so unlikeable and out of touch with reality when she’s supposedly all about being a reality star… as she raps inanely in her car.

Annie Hardy herself is the lead singer with rock band Giant Drag, known for quickly pulling out crudely improvised rhymed insults. She does this throughout the film and then for further mental torture, sings along to the end credits as she pulls out random cast and crew names. Yikes. At least Savage’s film is feature-length this time, but it’s a long 77 minutes to get through with Annie as the ‘host’ this time. Hardy has no screen presence whatsoever and her acting ability is limited to just singing, shouting and looking scared whenever strange stuff happens around her. Don’t give up the day job, Annie. Savage lives up to his surname, throwing all manner of madness and run-for-your-life terror at the screen to see what will stick. Not much actually. There are only so many times a levitating body will do its job, along with supposedly scary faces looming briefly into view. It becomes tiresome, increasingly boring and not particularly scary or unsettling – even for this seasoned horror reviewer. Savage may have made a name for himself so far, but he still has a lot to learn about the fundamentals of filmmaking. Like, having a good story for starters and characters to care about.

Dashcam is very much a car crash of a film that unlike Host has no redeeming values. It really has nothing to offer other than a cinematic headache, as it bashes you senseless with its camera and expects a begrudging approval in return. It throws everything but the kitchen sink at you in the hope that it might eventually win you over, but fails miserably to be either a decent horror or a road movie to ride shotgun with. Just… don’t.