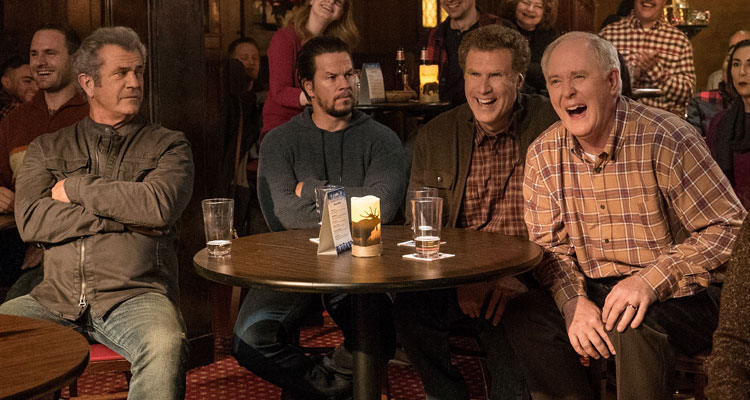 The Plot: Having bumped heads in the previous film, doting dads Brad (Will Ferrell) and Dusty (Mark Wahlberg) have gone progressive. They’ve got the co-parenting thing down to a T. Instead of staying apart this Christmas, they’ve decided to all stay together and have a grand old time. There’s double trouble this time though, as their own dads are coming too – Dusty’s macho skirt-chaser Kurt (Mel Gibson) and Brad’s simpering old man Don (Jon Lithgow). Dusty hasn’t seen Kurt for four years, a fact that grates on his nerves, while it’s only been four weeks since Brad and Don last saw each other. Friction occurs, so can they all keep the Christmas spirit and just get along?

The Verdict: Given that the first Daddy’s Home was mediocre at best, why on Earth is a sequel being inflicted on us? It appears to have made enough money to warrant a follow-up, which isn’t necessarily a good thing. Daddy’s Home 2 is essentially more of the same, but with some added chaos to make it worse. Much worse. Brad is still as useless as ever, but you can’t blame him when he’s subjected to feeble jokes like getting stuck in a voice-activated shower. Dusty is trying to get in touch with his feminine side and be less aggressive. The kids are smarter than everyone else, of course.

The one good element here is Gibson, who is clearly having the most fun. He brings a keen sensibility to his character and reminds us again of his talent for comedy. Between his performance in this, Blood Father and his fine directorial effort Hacksaw Ridge, it looks like his Hollywood comeback is complete. Welcome back from the wilderness Mel – we missed you. The less said about the rest of the cast the better. They all look bored, as if they want a word with their agent fast. The script is so poor that it wouldn’t even pass muster for a sitcom.

A key sequence of the film bears the most scrutiny. The two families and others are snowbound at a cinema (being the only place to go on Christmas Day in America). After a prompt from Brad, they all get down with a tuneless rendition of Do They Know It’s Christmas. Meanwhile, cinema staff toss out snacks to the hungry families. It’s been said that Americans don’t understand irony and that’s true here, given the whole purpose of the classic Band Aid song. It’s all done in rather bad taste.

Apart from these huge flaws, Daddy’s Home 2 makes the fatal mistake of being unfunny. Beyond a mere chuckle at Kurt’s one-liners, there’s little here to tickle the funny bone. It’s the kind of Christmas film that gives Christmas films a bad name. It’s a true turkey in every sense of the word. Daddy’s Home 3? Let’s ask Santa Claus to make sure it never happens.