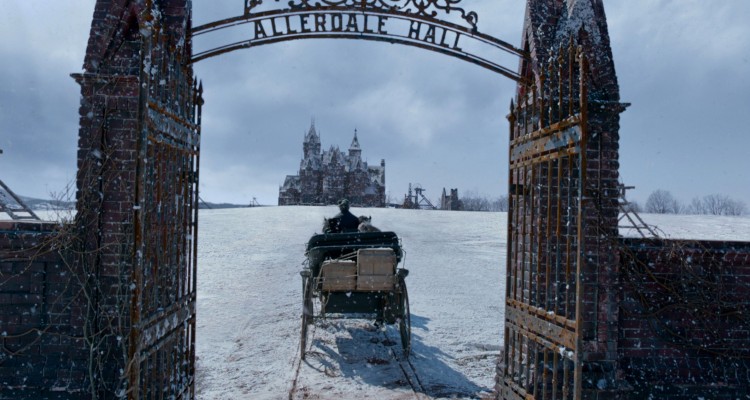 CRIMSON PEAK (USA/15A/119mins)
Directed by Guillermo del Toro. Starring Mia Wasikowska, Jessica Chastain, Tom Hiddleston, Charlie Hunnam, Burn Gorman, Jim Beaver.
THE PLOT: Young author Edith Cushing (Mia Wasikowska) has long since believed in ghosts, after her mother’s spectre appeared to her at a young age with a cryptic warning. Years later, Edith finds herself swept off her feet by the handsome, mysterious and charming Sir Thomas Sharpe (Tom Hiddleston). After tragedy strikes, Edith desperately wants to escape the memories of home, and sets out to make a new one with Thomas and his inscrutable sister Lucille (Jessica Chastain), in a crumbling mansion that is filled with holes, memories and blood coloured clay.
THE VERDICT: There has been much talk of director Guillermo del Toro returning to the horror genre with ‘Crimson Peak’, after the action filled Pacific Rim. Bad news for horror fans then, since ‘Crimson Peak’ is certainly moody, atmospheric and filled with ghosts, but it is more of a Gothic mystery, than Gothic horror.
Mia Wasikowska returns to the type of role she does so well; young and polite, but knowledgeable and slightly feisty. Wasikowska is the heart and soul of the film, and she carries the story ably, although some of the decisions her character makes are simply baffling. Tom Hiddleston, as we all know, does creepy and charming incredibly well. Hiddleston dials back the Loki levels of sinister to a more manageable level, but makes it clear that there is a lot more going on under the surface of this character. Jessica Chastain is cold and correct as Lucille. Again, it is clear there is more going on with her than meets the eye and although it is fairly obvious what this is, it is safe to say this is the fault of the screenwriting as opposed to the actress. The rest of the cast is made up of Charlie Hunnam, Jim Beaver and Burn Gorman.
The screenplay, written by del Toro and Matthew Robbins, starts out promising a good old fashioned ghost scream fest, but after the strange warning from Edith’s mother’s ghost, the film turns its attention to the more mundane and earthly dangers of the Sharpe family. There is quite a lot of foreshadowing in the film – ‘Perhaps we only notice things when the time comes for us to see them’ opines Edith at one point – and although the film has a delightfully creepy feel, it soon becomes clear that the living are far more dangerous than the dead.
As director, it is clear that del Toro was channelling psychological thrillers from the Golden Age of Hollywood cinema, such as ‘Gaslight’ and ‘Rebecca’ in order to tell this tale of a young woman in a domineering house. The scares are actually few and far between throughout the film, and the ghosts lose their ability to make the audience jump once it becomes clear that they are not the ones to be feared. The film is well paced and beautifully designed and although there are times when it is easy to see where this gothic tale is headed, ‘Crimson Peak’ is still an enjoyable and visually sumptuous ride.
In all, ‘Crimson Peak’ is not the horror it is billed as; it is more a Gothic mystery inspired by ‘Gaslight’ and ‘Rebecca’. Still, the story is well told, the central trio of actors shine and although the story feels familiar and predictable at times, ‘Crimson Peak’ is for the most part, an engaging and beautiful film.
RATING: 3.5/5
Review by Brogen Hayes