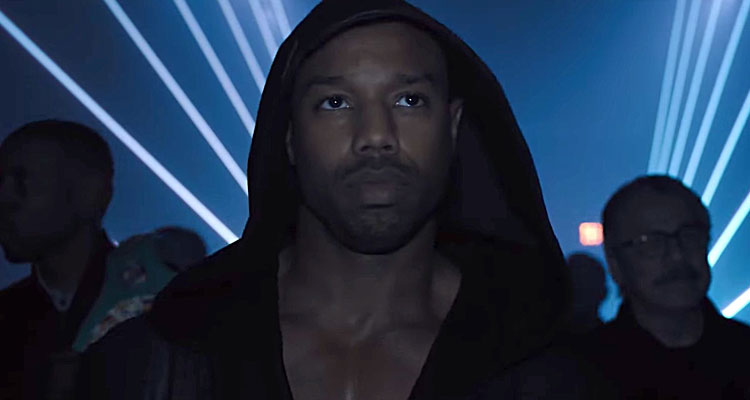 Now the world heavyweight boxing champion, Adonis (Michael B. Jordan) takes time off to concentrate on furthering his relationship with Bianca (Tessa Thompson). The weight of his late father Apollo’s legacy is still on his shoulders, kept in check by the more practical Rocky (Sylvester Stallone). That’s about to put to the test by the re-appearance of Ivan Drago (Dolph Lundgren), who killed Apollo in the ring but was later defeated by Rocky. Ivan’s career hit rock bottom following this defeat. Now he wants to restore his family’s honour by having his son Viktor (Florian Munteanu) face off against Adonis. Viktor is no pushover. He’s taller, has nothing to lose and everything to gain. Adonis has everything to lose. This battle royale proves too tempting to resist, despite Rocky’s concerns…

What’s your history with the Rocky movies?  Do you remember when you saw your first one?
STEVEN CAPLE JR.:  I was born in ’88, so the first Rocky film I saw was Rocky V.  My father loved the Rocky movies – and westerns – and I’d always watch them with him. I remember watching the original Rocky as a teenager, and I loved it as a true underdog story.    I was also into sports, and Rocky was a great motivator.   When I started working as a filmmaker, I began to appreciate the art within Rocky.  It felt different from other sports movies I had enjoyed.

Sylvester Stallone came up with the idea of not only continuing the story begun in Creed – but, in some ways, the story he began 30 years ago with Rocky IV.  Was that particularly interesting to you?
STEVEN CAPLE JR.:  For sure.  When I heard Sly was bringing back Ivan Drago, the iconic villain from Rocky IV, I thought it was an interesting way to include some key elements of history and legacy.  But I wanted to do something new with Ivan, to make him very different from what we remember. When I met with Sly, I learned he was already on that path.  In this film, Ivan is a multi-dimensional character, joined by his son, and it all kind of comes together with the traditional Rocky themes of family and triumph.  Dolph Lundgren brings a special dimension to the character, so I’m really excited for audiences to experience Ivan in ways they won’t expect. Florian Munteanu also brings something special to Ivan’s son, Viktor. Audiences may wonder whom they’re supposed to be cheering for.  I don’t think people are expecting that, either – to feel for this guy.

Going back in time a little bit, tell me about your first meeting with Stallone. Did you connect right away?
STEVEN CAPLE JR.:  In the days leading up to the meeting…well, it was intimidating: I was about to meet Sly, aka John Rambo, aka Rocky.  Our first meeting took place in Sly’s home, and the first thing you see when you enter it is a huge statue of Rocky.  I’m thinking, wow, this is really happening. But when we spoke, I felt like I was meeting with a humble writer who’s sensitive about his work.  Sly was very open to ideas; it was amazing to see him so engaged, forty years after creating Rocky.  It was like he was doing it for the first time.

Sly was also the one who found Florian. In his office, we watched a YouTube video of Florian in action, and Sly was pointing out his fighting style. Then we watched footage from other real fights, with Sly commenting on the choreography.  We went back and forth trying to figure out how to tell this story, how to make it different, how to bring back some of the poetry that he had in the fight scenes from the Rocky films, but still keep it real.  Then we worked on the script, focusing on Adonis’s journey and figuring out how to reintroduce Ivan and introduce Viktor in a big way.

What led Stallone to you?  Was it your previous – and debut – film, The Land?
STEVEN CAPLE JR.:  The producers were looking for a director who could speak to the generation and culture. They had seen The Land and asked me to meet with Sly and Mike [Michael B. Jordan].  The three of us discussed the story and, shortly thereafter, everyone was ready to move forward with the film.

Michael and Florian said that the most exhausting thing about their relentless training was the boxing choreography. Were you along with them on that part of their journey?
STEVEN CAPLE JR.:  Mike and Florian were so good at the boxing scenes, that you forgot what they were going through to get there.  Remember, this is the opposite of actual boxing, where every punch has a consequence and emotion behind it.  While Mike and Florian were always trying to be in tune with that realism, they were also trying to memorize the choreography, know where the camera was, and time their punches to make sure they’re in each other’s faces – while, of course, avoiding connecting.  So, it was like a dance.  It felt like a musical.

It was tough and hard on them.  They gave me their all. A lot of punches were thrown – and a few did connect.  I owe Mike and Florian because I told them that every time a punch slipped through and hit them, I’d take a few myself. I think I owe Mike three punches, and Florian nine.  But Florian doesn’t count because he’s so big he can eat punches.

Switching from boxing to drama, how does the relationship between Adonis and Bianca evolve?
STEVEN CAPLE JR.:  That relationship was one of the film’s main attractions for me. I’ve been married for two years, but I’ve been with my wife for fifteen years, so the Adonis-Bianca relationship really resonated with me.  I thought their dynamic in Creed was unique and it spoke to me in a way that was fresh and honest and felt like two best friends who just like being together.  We wanted to make sure that that relationship matured and faced new challenges.  Mike and Tessa [Thompson] already had that great raw and honest chemistry, and they brought another layer to this film, exploring the next phases in that relationship – being engaged and having a baby.  We rehearsed, talked through the lines, and then once on-set, just let them kind of be.  Tessa added her unique flair every time, to every scene.  Mike always says that she makes him better, which is cool because that’s how it is with their characters.

Was there ever a moment you just stopped and marveled at how you’re now part of a franchise encompassing more than forty years?
STEVEN CAPLE JR.:  It happened a few times – during the filming of the first fight scene, when Sly walked out and approached the ring, followed by Mike.  Fifteen hundred extras were giving them a standing ovation, which gave me chills.

Another moment like that came while we were filming an epic training montage set in a desert. During the scouting, we were just all there together, enjoying that moment.  A third moment came when we wrapped; everyone was emotional because we had all pulled together in the face of some major challenges.  So, there were a few moments when I would just stop, breathe in, and say, “Wow, this is a Rocky movie; this is a Creed movie.”

CREED II is at cinemas from Nov 30th