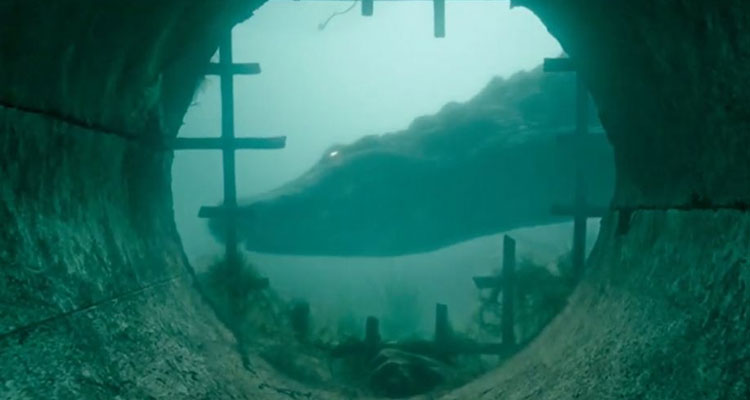 In short: Scares up a storm

The Plot: Ace swimmer Haley (Kaya Scodelario) battles through the elements of a Category 5 hurricane in Florida to reach her father Dave (Barry Pepper). He’s not answering his phone, so she arrives at her former family home and finds him unconscious in the dank and already flooding basement. They’ve got company – two alligators who are in their element and are intent on snacking on them. As they fight for survival amidst rising waters and even worse weather, they’ll have to face off against the alligators in a battle to the death…

The Verdict: It wouldn’t be a stretch of the imagination to say that director Alexandre Aja might view his new survival horror film Crawl as doing for alligators what Jaws did for sharks. The toothy prehistoric predators, who survived the extinction of the dinosaurs, make great villains. They have the edge on sharks too – they’re just as nimble in the water but can go on land too. That makes for a suspenseful prospect for the set-up of Crawl. Like all good survival horrors, Michael and Shawn Rasmussen’s script establishes the confines of its environment and the constant threat of injury or death circling from above and below. It’s not just about locking our two lead characters in the closet with the monster. It’s also about upping the stakes and putting more monsters around the closet too.

The story is inspired by a real-life event from last year’s Hurricane Florence. Though, it might be best to take that with a pinch of salt. We’re in the movie world here, though there’s no Jason Statham around to punch alligators. Instead, it’s a simple father-and-daughter story as the two of them try to find a way out of the basement and then the house alive – and in one piece. Aja has already established himself as a skilful director of suspenseful horror, breaking through with his brilliantly gory mood piece Switchblade Romance. While Crawl is a more obvious genre film, Aja has a playful sense of humour about his antagonists. They chomp away at anything they can get their teeth on, often centimetres away from a kill. A tense scene in a flooded bathroom is a good example of this. Aja doesn’t shy away from the gore either – the crunchy sound effects and thrashing are more unsettling than the liberal bloodletting. This is a film that bites.

Spending the majority of the film soaked and in distress, Scodelario makes for a compelling protagonist – far from the damsel in distress or a scream queen. There’s not much backstory here, other than her swimming skills which come in useful later on. However, she holds the screen and gives a very physical and gutsy performance. Pepper provides solid support too. The real star of the show though is the production design and special effects, which look far more convincing and real-world than another recent entry, The Hurricane Heist. Shot not on a Hollywood backlot but in Serbia, all manner of controlled chaos breaks loose as the hurricane intensifies. Hungry alligators aren’t the only problem here. Aja drops in a surprise element towards the end, but doesn’t do much with it other than suggest that there’s something else going on in the drainpipes. There’s missed potential here for a particularly creepy scene.

Crawl has no pretensions about what it is. It’s a fast-moving and effective piece of genre filmmaking. It scares up a storm thanks to its hands-on approach to telling its story in a straightforward manner, building up and then releasing its high tension and maintains focus on its central characters. The alligators behave in different ways too, rather than be collectively the same. As a late-summer diversion, Crawl does its job efficiently and with plenty of bite.