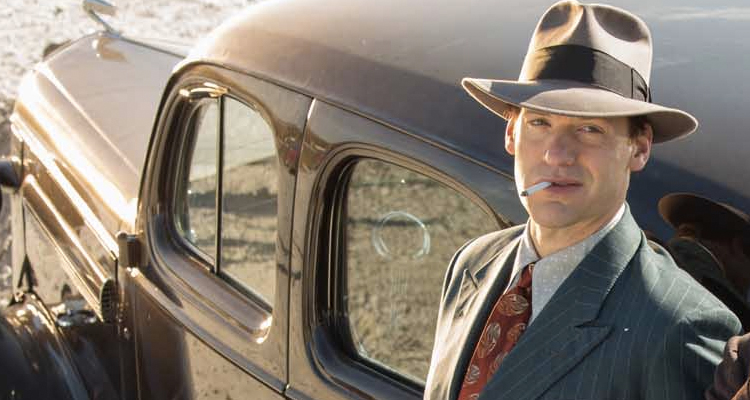 In ‘Café Society’ Corey Stoll reunites with director Woody Allen for the second time. Set in the 1930s, Stoll plays Ben, the brother of Bobby (Jesse Eisenberg); gangster turned nightclub owner. As café society takes off, Ben finds himself having to face his crimes and seek forgiveness for his actions.

Movies.ie sat down with Stoll earlier this year to talk ‘Café Society’, Woody Allen and working with Lena Dunham on ‘Girls’.

This was your second time working with Woody Allen after ‘Midnight in Paris’, was it different this time?
CS: Definitely easier, I was very nervous the first time. I think every actor, certainly the first time they work with Woody Allen, there’s a sense that it’s for the record; no matter how successful or unsuccessful the movie is, it’s always going to be part of the canon. It’s a Woody Allen movie. You go through hair and makeup, you block it and you shoot it, and you’re like “OK, I am ready to really give this performance” and he’s in his car, and he’s home. [laughs] That actually happened one time, he didn’t even bother to say “Cut”, he was already in his car going back to the hotel. This time, it’s not that I didn’t prepare – I read a lot about Jewish gangsters and watched a bunch of gangster movies – but I definitely let go of any idea that I could control the proceedings.

What do you find inspiring about Woody Allen?
CS: Well certainly the work ethic is incredible [laughs] I think for him, he feels like if he stops… In ‘Annie Hall’ he says “A shark has to keep moving or it dies, and what we have here is a dead shark”. I think he feels maybe – I don’t want to put words in his mouth – similarly about his career and you have to keep working or you die. I am trying to temper that [laughs] I have been able to take a little bit more time now with the birth of my son, and be home a little bit. One of the great things about working in the arts is as you age that enriches your work, and it becomes reflected in how your work can change, so the work you would do in your 20s or 30s or 40s is not what you would do later. It’s a way to stay present. That’s incredibly inspirational; to be 80 and still working as much as you did when you were in your 30s.

Were you surprised at all about the amount of violence in the movie? You wouldn’t normally expect this from Woody Allen…
CS: I thought it was cool! [laughs] I think the movie is trying to have a sense of scope, so you have these glamorous, sun-drenched parties in LA and then you have this very visceral, carnal world of the gangster, and then you have his parents and their very drab working-class environment. I think that’s one of the strengths of the movie.

You have just worked with one of the oldest stars of the industry, Woody Allen, and one of the youngest, Lena Dunham on ‘Girls’, is this variety of experience something you look for?
CS: Yeah absolutely and certainly the two of them could not be more different in terms of the way they operate on set. In general, I’m very lucky to be working at a time when there’s no stigma going between TV and film and theatre. You’re not forced into one particular lane; you’re an actor and you can work in whatever medium, and I like that. After any particular job I always want to do the opposite [laughs] so variety is definitely one of my most prized things.

Like Jesse Eisenberg, you have also been a villain in a comic book movie, and working with Woody Allen is obviously very different to that. Can you see any comparisons between the two experiences?
CS: This particular movie was very different. I think in a weird sense the ‘Girls’ character and the ‘Ant-Man’ character are closer [laughs], just in the sense of theatricality, and both of those characters are incredibly narcissistic, whereas in this movie he’s completely unglamorous. It was fun to be the most simple and direct that I could be, and try to just exist.

…But with a spiritual conflict at the end?
CS: I wouldn’t say conflicted; he was interested in the loophole of getting into some sort of after life. I don’t think there was any real sense of spiritual striving, and I think there’s a certain strain for a lot of Jewish people in following the letter of the law. You have buildings in Brooklyn where, on the Sabbath, you are not allowed to work or use machinery so the elevator just stops on every floor so you don’t press the button so you are technically not doing it… So even though he’s converting to Catholicism, he’s converting to Catholicism for the most Jewish reasons possible and in the most Jewish way possible.

What was he most difficult role you have played, in terms of personally disagreeing with the character?
CS: I don’t know. I was actually just talking with Lena Dunham about the reaction to the character in ‘Girls’, and we were kind of shocked that there were a lot of people who liked that character [laughs], and who thought that the relationship between him and Elijah was sweet and sexy… And I was like “I was trying to make this guy a monster!” so you can’t control how people react to the work. In terms of my feeling uncomfortable… Frank in the TV show ‘The Strain’ now… I have a son now, and some of the violence… They have these little children vampires that we have to kill sometimes and that gets to me; that’s starting to get to me a little bit. In terms of me portraying someone that I don’t like, I think its psychologically really healthy. I think it’s a chance to access parts of yourself that it’s not polite or acceptable to do in every day life, but it’s there anyway; everybody has these dark parts of their psyche and to have an opportunity to actually play that out is really healthy.

Have you got any plans to return to the theatre?
CS: Yeah I am about to do ‘Troyus and Cressida’ in Shakespeare in the Park in New York, and I am going to do another play right after that. Actually the last play I did was a production of ‘View from the Bridge’, that Woody saw me in and cast me as Hemingway in ‘Midnight in Paris’, so it has been over six years since I have been on a stage; it’s been too long. I am really looking forward to that. It’s been longer than I wanted it to be; I have been lucky enough to have a lot of opportunities in film and television that I felt I had to persue, but I definitely felt that if I let any more time pass before I got on the stage it would become an issue [laughs]. I think it can become very frightening. I think some actors develop stage fright mid-career, and knock wood that doesn’t happen to me. Even on a Woody Allen movie where you only get a couple of takes and there is a sense of theatrical energy… If it’s terrible, they are going to cut around it, there’s always another take. Obviously in theatre, you’re exposed.

CAFÉ SOCIETY is in cinemas Now