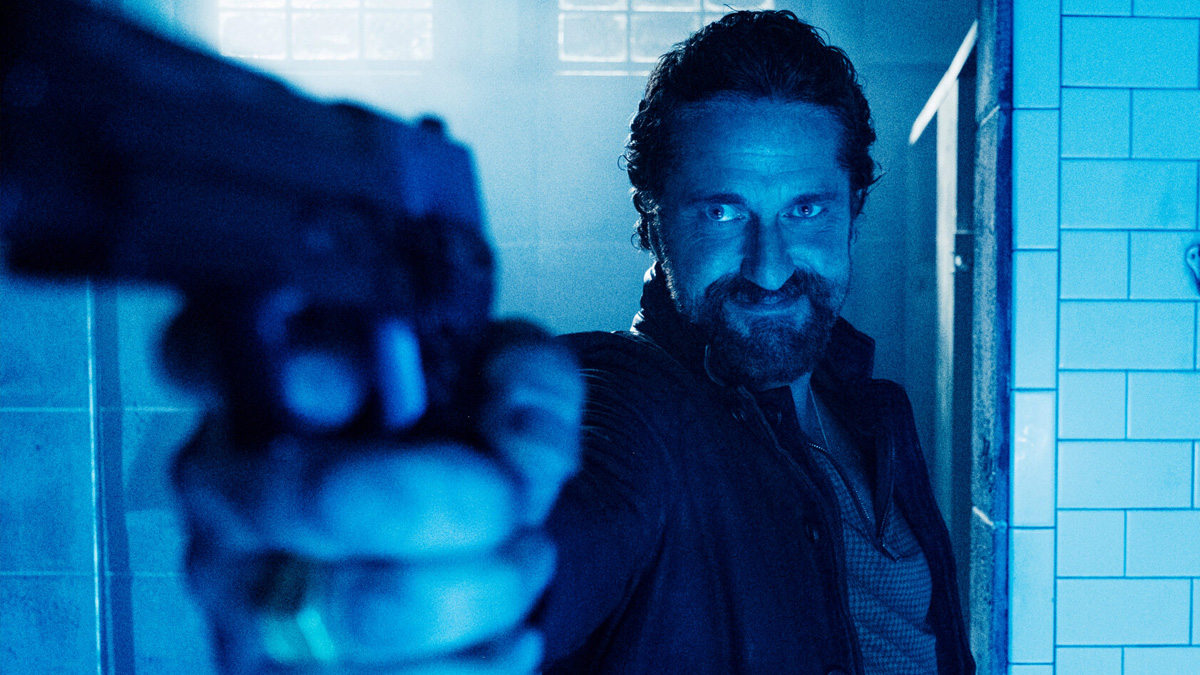 In ‘Copshop’ Gerard Butler plays a lethal assassin, who finds himself trapped in a stand-off with a jailed conman (Frank Grillo) and an extremely bad-ass cop (Alexis Louder) while locked up together in a small-town police station.

Gerard, you have played many characters that move a lot in big action set pieces, but here you play someone trapped in a confined space and even chained to a railing for a chunk of the film. Does being restrained change how you approach a scene?
Gerard Butler: Yeah, it does, weirdly in some ways. It’s partly frustrating and limiting, and in other ways, it unleashes you in a different way because you have to come much more from within. I feel that Vidick, my character, knows he’s there; he knows he’s not going anywhere until he has to. He’s cool with being there and just kind of sussing out the situation and waiting like a cobra for his moment to strike, you know. You make your little nest, and then you survey.

The film is a crime caper, but, at times, it feels like a western. Would you both agree?
Yeah, it definitely does. It stinks of Western, you know, that small-town sheriff trying to do good and in come the bad posse one at a time. She has to try and hold it together as, one after another, they come in to try and take out the person they want to take out, and she’s trying to protect them, not even knowing if she’s protecting the right guy. So now it has all those elements of a classic Western but what was awesome is updating it with a strong female protagonist as the sheriff.

Alexis Louder: Copshop is an original piece that has a lot of elements in it, and western is one that, at least for my character, I gravitated toward. I watched a lot of Clint Eastwood. The Good, the Bad, and the Ugly and Dirty Harry gave me some insight and inspiration for [my character] Valerie Young.

There is a lot of grey in Vidick, he is an assassin, but he might not be all bad. How do you approach a character like him?
Gerard Butler: It’s interesting because, while we were filming, that seemed to be changing. [Director] Joe Carnahan wanted to let in more moments of empathy between me and Val and liked that relationship. I did too, but I also liked it to be more hidden. We always gave different options. I knew what I wanted, but Vidick is a person who has a job to do which is to take out bad, spineless, corrupt, weak people. He has a certain code that he doesn’t normally stray away from, but Valerie is a conundrum. She is a cop, so she’s in the way, and he loves to get the job done and has a reputation to keep, but she’s also exceptionally brave, courageous, and good, and that’s something that he doesn’t typically like to mess with, so it leaves them in somewhat of a conundrum. You give different levels of that, and then in the editing room, you can see what’s giving away too much and what’s the right amount to be kept. A lot of it, I feel, was simmering underneath. That’s what I loved about that guy; he’s just watching all the time, studying, analyzing, thinking about what’s my next move. He is thinking, what the hell do I do here? Everybody in this movie is scheming all the time. They try to out-scheme each other. The conceit is so genius. You have so many people there, confined, so they cannot get to each other. It leads to a very enjoyable experience because you know all hell is going to break loose eventually and it does.

How did you prepare for the roles?
Alexis Louder: I went straight into stunt training and worked with the gunslinger on the twirls, and then I had to make my way back to the script to balance the performance with the physical training. I had so much fun learning those new skills and taking on the amount of dialogue in this film.

Gerard Butler: I did a lot of reading on sociopaths, psychopaths, hitmen, and serial killers, but the strongest thing for me is the climb into a backstory – who is this guy? How does he live the rest of his life? Is he friends with his mother? Who does he care about? What was his upbringing? What made him be an assassin and want to be the person who cleans the stains off the planet? What does he think of his victims? Why does he take such enjoyment out of creating these elaborate schemes? The bigger the challenge, the more awesome it is for him. He puts on an act, so who does he act as and how does he dress to get his target? When you get specific like that, it becomes much easier to be in that prison cell with all your opinions about what that prison means to you and what it means for your escape, what it means for taking out your enemy. It means getting into his head. It means trying to manipulate others and then just having fun with it. You can have so much fun with this kind of character.

Gerard, you have spent a lot of time in the action/thriller genre. Do you think you will ever go back to the rom-com genre?

Gerard Butler: I’m always making all different types of movies, but romantic comedies seemed to have died a death recently, and that’s a shame because I love making them. I don’t see many around, and the ones that are don’t seem to do so well, so I’m hoping they come back into vogue because it would be fun to do one. I’m so glad I made those movies, like ‘PS: I Love You’; they were so much fun to make.

Copshop is full of flawed characters; no one is truly good, is that fair to say?

Alexis Louder: I think we have human characters; some lean more to darkness, and some tip way over into the dark, even the ones that are closer to the light, have a little bit of darkness in them.

Gerard Butler: I think Valerie Young is the protagonist and the hero of the movie and the moral compass, but I think what’s lovely and surprising is the fact that even the darkest of characters have little touches of light and humanity in them. The other cops, they’re putting their life on the line for the right reasons. n=Not all of them because you know there’s corruption in there too, but that I think there’s heroism everywhere. There’s darkness everywhere, and that’s what’s cool about the movie is you’re surprised by the alliances that are made between characters you would never think would form any kind of alliance or connection.

Valerie is a kickass female. Did you take inspiration from any other kickass characters?

Alexis Louder: I watched the Old Guard and Charlize Theron, and that was fire, and I wholeheartedly look up to Danai Gurira in all her roles, be it The Walking Dead or Black Panther; she is a force to be reckoned with. But there’s so many that feed me as an artist; I can’t just pick one. If I were to think of something from my childhood, I would go back to the original Lion King. I watched that so many times when I was little and Nala left her pride to find food and ended up finding the would-be king and brought him back to restore their pride. She was one of my favourites.

Gerard Butler: Ripley in the Alien movies and Joan Allen in The Contender. It is an amazing movie about somebody who had to live their truth and integrity, even though the poisoned political world they lived in wanted them to lie to get themselves out of trouble, she wasn’t willing to do that. It is a phenomenal movie and a phenomenal character.

COPSHOP is at Irish cinemas from September 10th