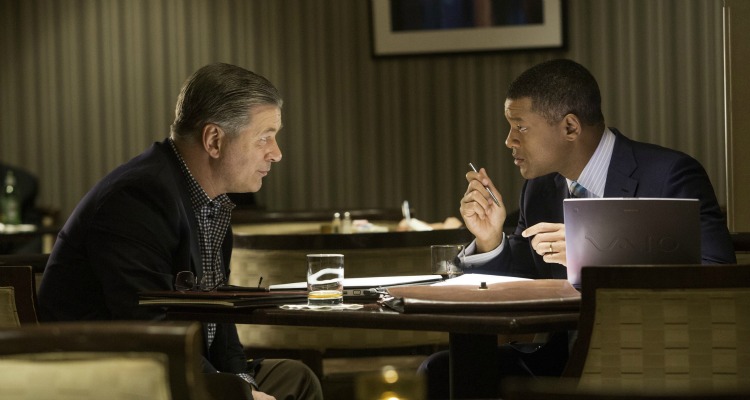 CONCUSSION (UK | Australia | USA/12A/123mins)
Directed by Peter Landesman. Starring Will Smith, Alec Baldwin, David Morse, Gugu Mbatha-Raw, Albert Brooks, Eddie Marsan, Adewale Akinnuoye-Agbaje.
THE PLOT: When former professional NFL player Mike Webster (David Morse) dies of an apparent heart attack, pathologist Bennett Omalu (Will Smith) pays for tests to be done on Webster’s brain at his own expense. After his findings reveal that constant head injuries left Webster – and potentially hundreds of other NFL players – with a degenerative brain condition, Omalu publishes his work in a medical journal, inadvertently drawing the anger of the NFL.
THE VERDICT: It probably doesn’t come as a surprise to anyone who has watched more than a few moments of American Football that this violent contact sport can have disastrous effects on players, but just how much suffering former players had to go through before this condition was realised – and even then, only after their deaths – has not quite been shown before. That said, this is not the story of the players, it is the story of a Nigerian immigrant to America, a highly qualified doctor who chose to work as a pathologist, and the struggle he went through to have his work acknowledged, and to protect players.
Will Smith is in the lead here as doctor Bennett Omalu, and although his Nigerian accent jars on first hearing it, Smith actually has a pretty firm grasp of the gentle African way of speaking. Smith also portrayed Omalu as a gentle and noble man, which makes the character watchable, and the audience drawn into this underdog tale. Smith is backed up by Eddie Marsan, Alec Baldwin, Gugu Mbatha-Raw, David Morse, Adewale Akinnuoye-Agbaje and Albert Brooks on wonderful, witty form. The cast are good with what they are given, but this is Smith’s film.
Writer / Director Peter Landesman has written another solid examination of true events, after Parkland and Kill the Messenger, and the screenplay for the film is solid in terms of simple and engaging dialogue. When the film falls down, however, is in getting caught up in the subplots of the film. Examining the life that Mike Webster was living before he died is worthwhile for the sake of the film, but there is a love story thrown in, seemingly, for the sake of giving Will Smith someone to give a monologue to and to receive an inspirational speech from, and the first 30 minutes or so of the film feel sluggish and drawn out in establishing the rest of the story.
As director, Landesman struggles with the pace of the first and final acts of the film. Establishing the story feels as though it takes a lot of work, and the final act of the film simply runs out of energy and peters out. The performances are strong enough, but the actors are simply not given a chance to do much other than carry the story.
In all, ‘Concussion’ is an interesting enough tale, but since a lot of the events and findings mentioned in the film are still being investigated, there is no truly satisfactory ending to be had in the film. Smith and his supporting cast do fine with what they are given, but still only act as conduits to the story, so even though there is enough to engage with here, the film feels unfinished and unsatisfying.
RATING: 3/5
Review by Brogen Hayes