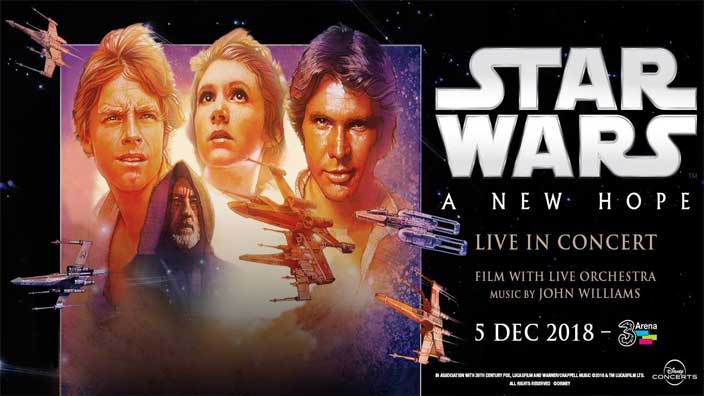 Win tickets to experience the scope and grandeur of Star Wars: A New Hope in a live symphonic concert experience.

We have a pair of tickets up for grabs for a screening of Star Wars: A New Hope, with Oscar®-winning composer John Williams’ musical score performed live to the film, at 3Arena Dublin, next month on 5th December 2018. Featuring composer John Williams’ complete score, the 82 piece RTÉ Symphony Orchestra will be conducted that evening by David Mahoney. Tickets are now on sale from ticketmaster.ie
ABOUT THE EVENT
Since the release of Star Wars: A New Hope over 40 years ago, the Star Wars saga has had a seismic impact on both cinema and culture, inspiring audiences around the world with its mythic storytelling, captivating characters, groundbreaking special effects and iconic musical scores composed by Williams. Now fans will be able to experience the scope and grandeur of Star Wars: A New Hope in a live symphonic concert experience.

ENTER THE COMPETITION
To be in with a chance of winning answer this question who composed the score for Star Wars: A New Hope?

The Star Wars:  Film Concert Series is produced under license by Disney Concerts in association with 20th Century Fox and Warner/Chappell Music.

STAR WARS and related properties are trademarks and/or copyrights, in the United States and other countries, of Lucasfilm Ltd. and/or its affiliates. © & TM Lucasfilm Ltd.