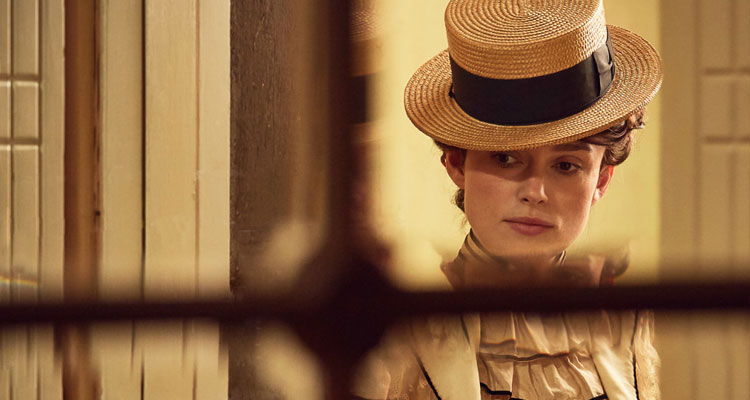 The Plot: France, the 1890s. Spirited country girl Gabrielle (Keira Knightley) falls for the charms of the older, wilier Willy (Dominic West). He’s a prominent Paris publisher who specialises in popular literature. When he falls on hard times, he encourages Gabrielle to develop her burgeoning writing skills. He at first dismisses her mostly autobiographical account of a girl growing up in an obscure provincial town, saying that it’s too feminine and needs more plot drive. After some adjustments, it’s published under Willy’s name and becomes a literary sensation thanks to its racy tone. Gabrielle adopts the persona of one of her other names, Colette, and becomes a media personality in her own right – but further novels still remain under Willy’s name. As Colette fights for recognition, she challenges gender norms in supposedly liberal Paris…

The Verdict: Underestimate Keira Knightley at your peril. Too often dismissed as a pretty, pouty face who props up franchise films, she’s been in the business a long time. Much like her character in her new film Colette, she’s fought for recognition of her talent. Doubters may indeed be silenced by her stunning turn in Colette, a thoughtfully-made period piece with a 21st Century frame of mind. It’s no stuffy biopic though. It’s remarkably light on its feet, but tackles weighty themes about the role of women in a then male-dominated society and the fluid nature of sexuality – whatever the time period and its acceptance or not of it. All of this is framed through the relationship between Colette and Willy, who have a dependency on each other. He even indulges her attraction to women, in the hope that it might lead to more creative content.

Though, Willy relies more on Colette and shamelessly uses her as a cash cow to churn out further books which he appropriates under his own brand name. This all makes for an intriguing battle of wills between two complex characters and the various lovers who come into their lives. It would be easy to paint Willy as the villain of the piece, but West delivers his cad with some respectability. He’s more of an opportunist, a businessman whose only talent is spotting other people’s talent and then exploiting it. Through it all though, there’s always a sense that he loves Colette and vice versa. For her part, Colette becomes his equal and moves out of his shadow to pursue her own singular success as an actress and celebrity of Parisian high society.

This is where Knightley really comes to the fore and shines, as she portrays a talented young woman whose progressiveness and forthrightness was well ahead of her time. She nails the essential qualities of her real-life character, making her credible and modern so it becomes a story of then with relevance for now too. Colette is an engaging character from the outset, with a beautifully carved character arc from an ingenue to an independent worldly woman. Knightley portrays all these facets of Gabrielle and then alter ego Colette with unbreakable confidence. It’s her finest role and performance to date, cementing that she’s capable of responding to an excellent script when given the chance by a casting director willing to look beyond her looks.

Still Alice director Wash Westmoreland eschews the usual trappings of the period piece to make Colette more of a modern-like character piece that happens to have a period setting. He stages an eye-opening dance sequence in which Colette walks like an Egyptian and gets the period detail just right, but never loses sight of his central duo and what makes their marriage tick through the years. While Still Alice was frequently soapy, Colette is a stronger, more assured effort that marks the Leeds-born director as a name to watch. Along with his leading lady of course, who chooses her roles carefully these days. She’s on to a winner with this one – and so will the audience.