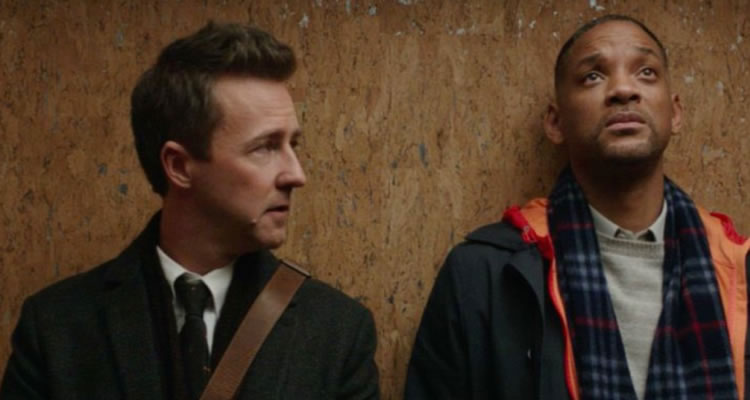 COLLATERAL BEAUTY (USA/12A/97mins)
Directed David Frankel. Starring Will Smith, Kate Winslet, Edward Norton, Helen Mirren, Kiera Knightley
THE PLOT: Two years after his young daughter dies, Howard (Will Smith) is still monosyllabic, and has little interest in engaging with the advertising firm that he founded with his friend Whit (Edward Norton). With a big account on the line that could make or break the company, Whit and colleagues Claire (Kate Winslet) and Simon (Michael Pena) decide to hire actors to play the roles of Time, Death and Love – abstractions that Howard has been writing pained letters to – in order to get him to relinquish his controlling stake in the company.
THE VERDICT: Immediately after watching ‘Collateral Beauty’, a question arises… What happened to the original script for the film – which was strong enough to draw in Will Smith, Helen Mirren, Kate Winslet, Kiera Knghtley, Naomie Harris, Michael Pena and Edward Norton – and who replaced it with this sentimental pile of twaddle and borderline offense?
The cast of the film truly try to make’ Collateral Beauty’ an engaging and strong film, but really the only ones who come out in any way well are Helen Mirren, who obviously has fun with her eccentric character, and Will Smith who, while playing the sentimental and saccharine sweet angle of the film up, has a great sad face. Everyone else, Kate Winslet, Michael Pena, Edward Norton, Naomie Harris and Kiera Knightley, are wasted.
Screenwriter Allan Loeb previously brought us ‘Here Comes the Boom!’, ‘So Undercover’ and ‘Rock of Ages’ in 2012, but this is his first cinematic outing since then. ‘Collateral Beauty’ tries to blend the reality and heartbreak of struggling to deal with the death of a child with the magical and the mystical, but this just feels dated and old fashioned, and the two never quite blend together properly. As well as this, Howard’s “friends” – Norton, Winslet and Pena’s characters – behave so appallingly to their friend that it is difficult to reconcile this into the film, and the trite, twee and cliché feel to the film undermines any glancing blow it manages to make on emotional truth or sincerity. ‘Collateral Beauty’ has two terrible, twee and unnecessary twists that just patronise the audience, and serve to embarrass the stellar cast assembled in this mawkish mess.
Director David Frankel has previously brought us the mawkish and overly sentimental ‘Marley and Me’, as well as ‘The Devil Wears Prada’, ‘Hope Springs’ and several episodes of ‘Sex and the City’. There is nothing subtle or careful about ‘Collateral Beauty’; this is a film that belittles grief and despair, treats its cast with distain and talks down to the audience.
In all, there is little to commend about ‘Collateral Beauty’ – other than the fact that it is always a joy to watch Helen Mirren on screen. The film is twee, mawkish, overly sentimental and borderline abusive to its cast and characters. ‘Collateral Beauty’ tries to blend the mystical and the mundane, but simply ends up offending audiences and belittling the experience of suffering and grief.
RATING: 1/5
Review by Brogen Hayes