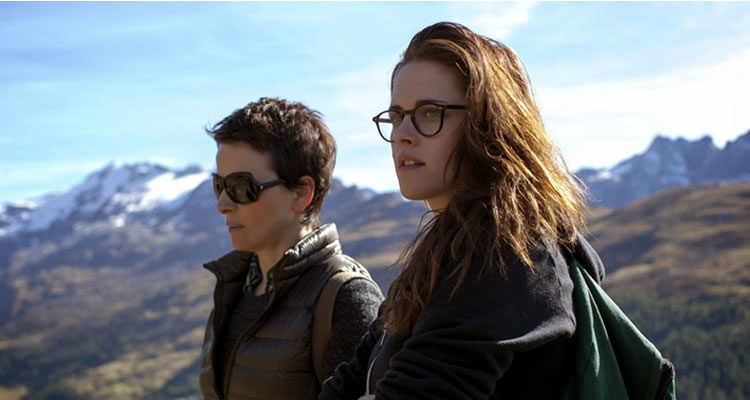 CLOUDS OF SILS MARIA (France | Switzerland | Germany | USA | Belgium/15A/124mins)
Directed by Olivier Assayas. Starring Juliette Binoche, Kristen Stewart, Chloë Grace Moretz, Lars Eidinger, Johnny Flynn, Angela Winkler.
THE PLOT: Maria (Juliette Bioche) finds herself facing the fact that she is growing older when she is approached to star in the same play that made her famous as a 20 year old actress, only this time she is to play the part of the older woman, and allow a younger actress to play the role she made famous. Struggling to learn her lines and to find a place where she belongs in her career, Maria’s frustrations become evident as she argues with her personal assistant Valentine (Kristen Stewart).
THE VERDICT: There is something familiar about CLOUDS OF SILS MARIA, with BIRDMAN only just in our collective rear view mirror, here comes another film about an actor trying to find where they belong in their career as they grow older. That said, CLOUDS OF SILS MARIA was screening at festivals around the world while BIRDMAN was still being made, and there is also something of ALL ABOUT EVE and SNSET BOULEVARD about the film, which makes this film, effectively a two hander between Binoche and Stewart, a fascinating one.
Juliette Binoche is on fantastic form here as Maria, and allows the character’s fear about where she belongs now she is growing older to be the lynchpin of the entire film. Kristen Stewart is perhaps the best she has ever been, and gives a wonderfully honest performance as a young woman who sees the world in a different way than her older employer, and the chemistry between the two is wonderful. Elsewhere, Chloe Grace Moretz embraces the young tabloid hungry starlet with aplomb, although there are some of her scenes that ring somewhat hollow.
The story, written by Olivier Assayas and based on an idea by Juliette Binoche, blends together fiction and reality cleverly, so the film feels like life imitating art imitating life. The dialogues between Binoche and Stewart as they run lines for the film feel honest and relatable, and there is a healthy dose of awareness of her own myth on the part of Stewart, as Valentine hammers many points on the nose that were true in Stewart’s own personal life. This doesn’t seem to be coincidence, however, as Stewart lobbied for the part having first been offered the role of Moretz’s young ingénue.
Olivier Assayas directs with care, making the dialogue heavy film feel real and honest, with the interactions between the women at the centre of the film taking centre stage, but never overwhelming the film, and allowing the audience to learn more about the characters through their interactions with one another. Just as things take a turn for the predictable, a mystery is introduced to the film, which turns the story on its head.
In all, CLOUDS OF SILS MARIA contains powerful performances from Binoche and Stewart, whose chemistry and ease with one another makes the film work. There is plenty to ponder here, and enough comedy to stop the film from sinking into a depressive tale about an aging actress. The comparisons with BIRDMAN, ALL ABOUT EVE and SUNSET BOULEVARD stand, but Olivier Assayas’s film tells the story in a new and engaging manner.
RATING: 5/5
Review by Brogen Hayes