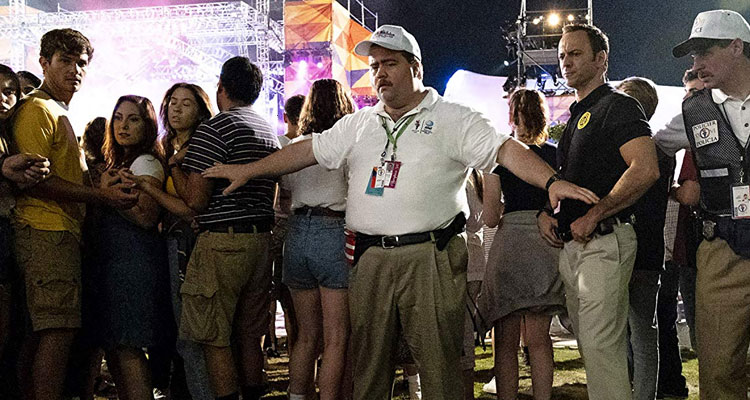 Director Clint Eastwood brings us the true story of Richard Jewell, a security guard who discovers a bomb during the 1996 Olympics, saving hundreds of lives in a bombing that ultimately claimed two. But shortly after his heroic discovery, Richard Jewell was prosecuted by the media as a suspect of the bombing, leading to his name being forever tarnished. The movie is out now to watch at home on digital release.

Do you remember the 1996 incident at the Atlanta Games?
CLINT EASTWOOD:  Before working on this picture, I didn’t remember the details too much.  I can’t think of where I was at the time, but I remember when they said that they had a guard who found the bomb, who was a hero and then a suspect.  I remember that, but I didn’t know too much about it, and in hindsight I had forgotten about it.  But when I read the article and the script, it seemed like a really interesting subject for today.

Why is that?
Because, like then, people are still quick to judge today, without thinking of the consequences.

What made you decide to make this movie?
You know, I got involved about four or so years ago.  I had read the [Vanity Fair] article by Marie Brenner and I had seen a script, and I liked it.  But it was with another studio, and then I was working on another project, and then all of a sudden, I just got a feeling I should check in on this, so I checked in and said, “What’s the score on it?”  And we brought it back to life again and here we are.

What makes it such an intriguing story?
Well, because I thought it was very pertinent for today.  This everyday guy who was getting the ultimate bad deal from everybody because they were concerned the event was going to shut down, and the city had millions of dollars invested in it.  So, they just went ahead and pinned it on this guy who was vulnerable.

And why is Richard Jewell such an intriguing character?
He was a guy who was obsessed with being a police officer, and law enforcement was his dream.  And so here he was out there working – it wasn’t exactly living his dream being out there as a security guard, but it was at least partially law enforcement.  And then he was the one who was smart enough to discover, actually by intuition, the bomb and what it was.  Nobody else cared.  They didn’t think it was anything – they thought he was crazy.  So, it’s kind of a “one guy against the world” story and an everyman-turned-hero story.

It’s tragic and touching at the same time, and you see the injustice of it all.  Would you call it politics as usual?
It was a bad deal, you know.  It was just a real tragedy.  No, I don’t see it as a political story but much more of a human story.  About the little guy against the world, David versus Goliath.

Tell me about your choice of Paul Walter Hauser for Richard Jewell.  What makes him so appealing and perfect for the part?
He was our only choice for Richard, and it was a big opportunity for him to be the main protagonist of a movie, and he really took to it, he’s just terrific.  He learned everything he could about Jewell.  He listened to him on the news reels and so forth, and really got him down.

Are you very specific in directing him?
We did most of the directing before we ever started with him.  I got him all this material.  I introduced him to Watson Bryant, the attorney, and Jewell’s real mother, Bobi.  And he spent time with them.  And then we got him all the materials to look at, from the various shows, the talk shows the real Jewell was on.  He got the accent exactly right.  I mean, you’ll be surprised when you see him, if you look and compare him to Jewell.  You don’t know who’s who.

And what makes Sam Rockwell special for the role of Watson?
Well, I like Sam as an actor, he’s very talented.  And I thought he could capture Watson Bryant.  I really liked what he brought to the table in every scene we did.

Kathy Scruggs is such an intriguing character.  What did you want to portray in the film’s depiction of her?
Yeah, she’s a fascinating character, she was obviously very tough, managed to always be ahead of the game, in terms of investigating.  When Olivia read the script, I think saw a chance to do a lot of things with the role.

And Kathy Bates is a great casting choice for Bobi Jewell.
Yeah, Kathy is great.  She was very focused and took it upon herself—as the others did—to research beyond the script or anything we could give her, to make sure she captured the real Mrs. Jewell.

Did you have her meet with the real Bobi?
Yes, I did.  I had them all come out to meet in Los Angeles.  It was great.  I had met Bobi and Watson and I wanted them to meet Paul.  They spent the day with us at the Studio and we talked about the film.

Are they angry or bitter after all these years?
No, no.  But I think they all thought it was good that we were doing the story, his story, because it’s a tribute to Richard, who is long gone.  He only lived to 44 years of age.

And what makes Jon Hamm perfect for the part of Tom Shaw?
Well, Tom Shaw is a fictionalized combination of a couple of different agents, and I just think Jon Hamm is a very good actor and he wanted to play it so that was great.

What would you like the audience to take away from the movie?
I want them to see what a tragedy is and see how things can get out of kilter and a lot of people can suffer from it, because people are always covering their rear ends, you know, and that’s not always the right thing to do.