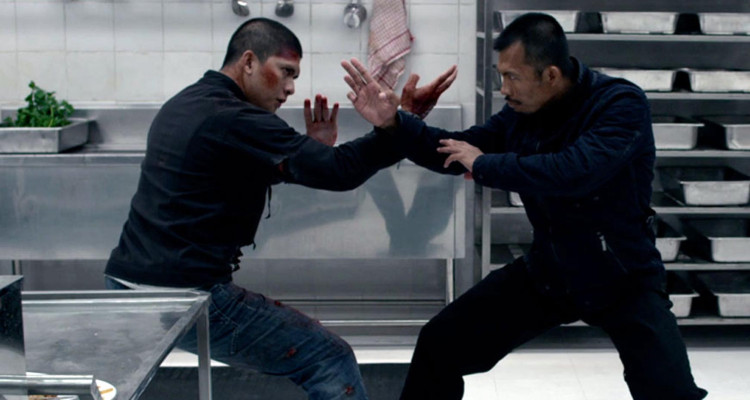 Claustrophobic Movies… From THE RAID to PHONE BOOTH to GREEN ROOM

This week, the highly anticipated ‘Green Room’ – from the director of the critically acclaimed ‘Blue Ruin’ – is released in Irish cinemas. Starring Patrick Stewart, Alia Shawkat and Anton Yelchin, ‘Green Room’ follows a young punk band who accidentally witness a murder after a gig and find themselves held captive, and fighting for their lives.
To celebrate the release of ‘Green Room’, Movies.ie has taken a look back over some other great claustrophobic films.

THE RAID
Gareth Evans’ 2012 film tells the story of an Indonesian special police task force, who go into an apartment building to bring down a crime lord. A chance encounter with a spotter blows their cover and the team find themselves stranded on the sixth floor of the building with only one way out.
The entirety of ‘The Raid’ takes place in one apartment building, with the police team fighting their way into the building, only to have to fight their way back out again. The film is fast and furious, but the speed does not detract from the closed off feeling that permeates the entire film.

CARNAGE
Directed by Roman Polanski, and based on the stage play ‘God of Carnage’ by Yasmina Reza, ‘Carnage’ is the story of two sets of parents – played by Jodie Foster and John C. Reilly, and Kate Winslet and Christoph Waltz – who meet to resolve an incident between their young sons, but the more time they spend together, the more they realise they are at odds with one another.
‘Carnage’ is set almost entirely within the apartment owned by Foster and Reilly’s characters, and the claustrophobic environment almost becomes a character in and of itself; driving the characters to boiling point as they try to cordially resolve a tense situation. To accurately portray this feeling on screen, Polanski shot the film in real time, and without breaks.

PANIC ROOM
Director David Fincher amps up the tension in this 2002 film. Meg Altman (Jodie Foster) and her daughter Sarah (Kristen Stewart) are forced to take refuge in their home’s panic room when three men break in, searching for a fortune hidden in the panic room itself.
David Fincher devised ‘Panic Room’ as a film to be shot in a single location, since his previous film ‘Fight Club’ had over 100 locations and he wanted to simplify the process. This leaves ‘Panic Room’ feeling as claustrophobic as the name suggests, with shots through walls and a character suffering with asthma adding to the feeling.

LIFE OF PI
Ang Lee’s CG epic is the story of a young man whose life is irrevocably changed when the ship carrying his family – and hundreds of animals – to a new life is sunk. Pi (Suraj Sharma) is shipwrecked, but makes a strange connection with another survivor; a Bengal tiger named Richard Parker.
Yes, we know that ‘Life of Pi’ takes place outdoors, and not in a single room like many of the other movies we have mentioned, but since Pi is confined to a small lifeboat for much of the film, with only a Bengal tiger for company, the wide horizon of the film soon starts to feel very claustrophobic indeed.

PHONE BOOTH
Colin Farrell’s character Stu makes the mistake of answering a ringing public telephone on a New York City street, only to be told that a sniper has him in his sights, and is determined to make Stu confess his wrong doings or be killed.
Directed by Joel Schumacher ‘Phone Booth’ is another film that is set outdoors, but feels claustrophobic and constrained, since Stu cannot leave the phone booth for fear of being shot, and has to follow the rules set out to him by The Caller, played to sinister affect by Kiefer Sutherland.

‘Green Room’ is released in Irish cinemas on May 13th 2016. Watch the trailer below…