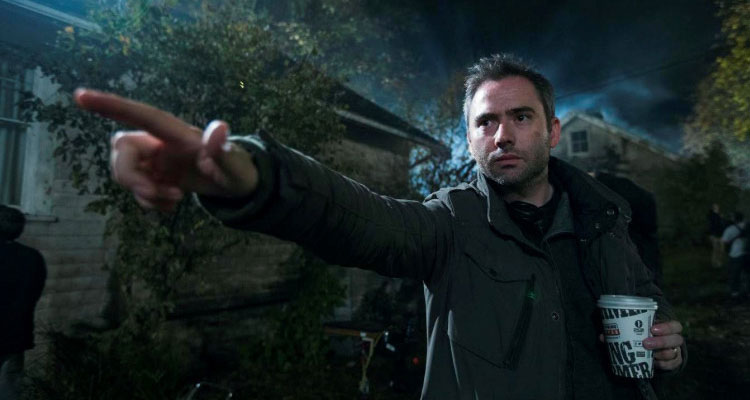 With Citadel, filmmaker Ciaran Foy has turned a traumatic teenage attack into a fine indie horror.

PAUL BYRNE: Inspired by a gang of hooded kids attacking you for no discernible reason back when you were 18. You took that agoraphobia and turned it into a movie; did Citadel give you, as the Americans like to say, closure?

CIARAN FOY: Yeah, definitely. More in the writing of the script, to be honest. I found myself when I… It took five and a half years to get this film off the ground, and to bathe myself in a situation and scenarios that I’d rather forget over that long period of time was incredibly difficult. I almost felt that, when I was in the middle of it, I was taking steps backwards.

I didn’t realise until the end that I was echoing the arc of the main character, so, by the time I got to the end of the story, sounds cheesy, but I felt empowered. You feel like the master of your own creation, something that you have a power over, and that was cathartic. The shoot itself was complete chaos; 23 days in the worst winter that Glasgow has ever experienced on record. It was literally a case of laying the tracks before the moving train, so to speak, so, the writing of it was the most cathartic.

The worst kind of terror is when there’s no discernible reason for it – like M. Night Shyamalan still being allowed to make movies…

I haven’t seen ‘After Earth’ yet, but I’ve heard nothing but bad things…

For you, it must have been a rich vein to tap into – the horror that has no reason, no revenge, behind it. That hair-raising Haneke horror.

It actually thought me a huge lesson about the DNA of fear. It’s true for any kind of terror – including terrorism – if you know why someone did something, no matter how mad the act may be, you can eventually make a peace with it. When something feels totally chaotic, and there’s no rhyme or reason to it, that’s really the definition of darkness. It’s the not knowing which is the most terrifying of all.

It’s funny, I was asked a question when I was on the festival circuit, in Los Angeles, someone wondering whether I was an Irish filmmaker, or was I a filmmaker who just happens to be Irish. I answered that by asking what is an English filmmaker? A French filmmaker? An Irish filmmaker? How do you define such things. And it made me realise that I am a filmmaker who just happens to be Irish. The filmmakers that I grew up loving – Spielberg, Cameron, Verhoeven – are still the main inspiration for me. And they’re still the films that I go and see today. So, that never really felt the need to reflect my Irishness, as such. Even shooting in Glasgow took me into a desire to have no roots, to leave the audience without a definite spot on the grid.

To be honest, I see Citadel as an indie horror film as opposed to an Irish film.

You shot it in Glasgow, as you say, over 23 days – did any of those kids know you were making a movie…?

[Laughs] It was funny, because the guys who played the feral kids, they’re not actors. They’re all from the local school, and they know each other – which is the worst thing to have, because they form a gang for their messing. Every day on set was like Halloween for them, because they’re running around in this prosthetic make-up, and they sometimes like to pull it off, even though it costs a fortune. It added to the chaos, having these wild kids running around along with two baby boys – playing the baby girl -, stunts, the effects, this incredibly cold weather, this grim, abandoned tower block.. It was minus-19 most days, and there were little or no windows in this tower block, making it minus-10 indoors. Throw all that into the mix – all the no-nos of a shoot – you have complete chaos, but it was worth it in the end.

Those guys you mentioned, they are my favourite filmmakers, and I am a geek at heart – I love science fiction as much as I love horror – but it was two-fold here. Firstly, this was a story about me, about something I knew. Secondly, I could see how the low budget would almost benefit a horror, which it doesn’t really help when it comes to sci-fi. I knew I was going to have a bag of peanuts when it came to the budget here…

How many peanuts, exactly?

It was one-point-two million pounds.

It took over five years to raise that – a lot of banging on doors, or were you also just not ready?

I was ready. It was just a lot of banging on doors. After The Faeries Of Blackheath Woods [multi-award-winning 2006 short], a lot of doors opened. People asking me if I had any ideas for features. A year later, I had the Citadel script, but the recession was kicking in, and we ended up hopping beds a lot with different financiers. Then I was chosen to be part of this scheme, Advance Party 2, with Lars Von Trier and other studios, and that’s where I met Sigma Films. They read the script and really loved it, and they suggested an Irish and Scottish collaboration, and that eventually worked out.

According to The Hollywood Reporter, this ‘plays out like an anti-welfare parable’. Did you know that?

Talk about grabbing the wrong end of the stick. It’s funny, the film either gets really good reviews, or people read it as this weird social allegory. For me, it’s two-fold. On the one half, I wanted to make a film that was honest to how I saw the world as a frightened 18-year-old. I wanted to create an urban paranoid nightmare in that respect. On the other hand, talking about social allegory and all that kind of stuff, I come from a working class background, and I wanted Danny to come from this world. It’s not something like Eden Lake, with a middle-class couple finding themselves battling working class kids. I very much wanted to avoid that, with Tommy’s BMW breaking down in the middle of Shitsville. He’s from this area.

I was asked a question in Lyon, ‘Do you think this is right? Dealing with juvenile, working class delinquents by burning them?’. And rather than go into a long explanation, I just said, ‘If they’re inbred feral mutants, yes’. That got a laugh from the audience.

And if there was anyone from Dublin in the audience, they would have known that was a sly reference to Tallaght.

Talking of horror, you were on a double-bill in the US with Charlie Casanova – did you have any say in that?

That was part of the LA Irish festival, so, they put them on together.

You’re working on a sci-fi next, but that’s coming together, right?

Yeah, I’m working with the guys who did Moon, and they’ve asked me not to reveal the title yet, but I could say that it’s set in a futuristic New York, and it’s about identity theft. It’s something they’re planning to announce at the Toronto Film Festival in September. I literally just handed in the new draft last week, and everyone’s happy with. We’re going to work on a teaser trailer now for Toronto, and try and get it financed.

Finally, is it a rule in horror that every pregnant woman must carry a potted fern just before she gets it in the neck?

I think that is the rule, isn’t it? I had all these visual and sonic rules here, repetitions and rhymes, where the colour amber would symbol fear, and green would symbol love, and life. So, that would explain the fern. It’s one of the few living things in the movie, when you think about it…