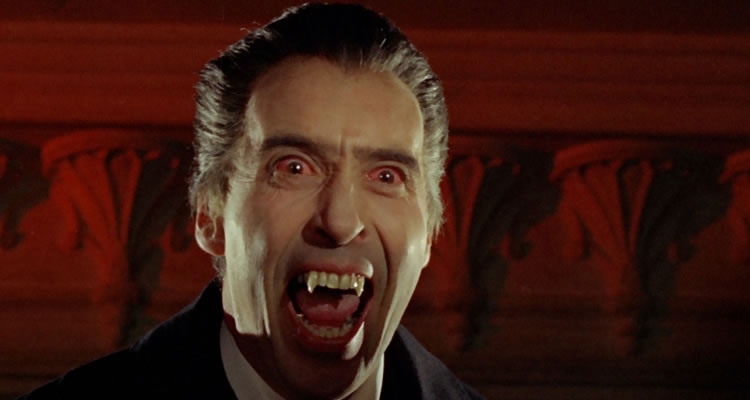 The sad news of the passing of cinema legend Christopher Lee has had everyone thinking about his amazing career. From 1922 up until his death he has fought in five wars, learned six languages, released several music projects (which included a metal album) IMDB credits him with 274 acting roles, Guinness says he’s appeared in more films than anyone ever. If that’s not enough, Lee’s movies have grossed more than any actor ever – his top five alone grossed $4.4B (number two is Harrison Ford with $3B) and that doesn’t even include the new Hobbit stuff and everything else since then. He’s such a veteran pro that he filmed every single scene in Star Wars 3 in a single day. But it’s his horror movies that we feel were amongst his most iconic, we asked Aran from FirstClassHorror (Ireland’s only horror site) to come up with Christopher Lee’s most iconic horror roles.

My only complaint about this film is that Christopher Lee should have had more dialogue. This, alas, is the glaring fault of the numerous sequels to this excellent film. Lee’s drop-dead voice made that feature an absolute requirement for an actor being cast as a vampire. Christopher Lee will always be the quintessential Dracula — aristocratic, powerful, evil, and seductive in the extreme.

There is also no equal to Peter Cushing’s swashbuckling interpretation of Dr. Van Helsing. His probing intelligence and disciplined physical approach to this character makes him totally believable and inspires total confidence in the audience that good will triumph over evil. And do it with style.

A decade after Count Dracula (Lee) was reduced to dust by brave vampire-slayer Van Helsing (Cushing), the superstitious folk of Carpathia still stake their dead before burial, preferring not to take any chances. Four English sight-seers who, upon being stranded mid-journey by their coach driver, wind up at Chez Dracula.

Welcomed by Klove, Dracula’s man-servant, the unsuspecting foursome are given food and shelter for the night, unaware that the castle ‘s creepy caretaker intends to resurrect his master—using their blood!

Very atmospheric, with superb cinematography and fine performances from its cast, ‘Dracula, Prince of Darkness’ is a worthy successor to the ’58 original. Lee is as good as always, his Dracula a truly menacing creation with blood-red eyes and a mean snarl.

Cushing plays Victor Frankenstein who with his teacher and friend, Paul Krempe (Robert Urquhart) experiment on restoring life to dead animals. When Frankenstein announces that he is ready to “create” a living being from dead bodies, Krempe balks. Frankenstein decides to go it alone and in his madness, resorts to murder to obtain the “materials” that he needs to complete his work.

During a malfunction in the laboratory, the assembled creature (Christopher Lee) comes to life and escapes into the forest. He is thought to have been killed, but the ingenious mad man re-creates him and he again runs amok.

Lee is very limited in his role as the ‘creature’ in this movie but none the less delivers a stellar performance, his walk and the facial expressions he portrays are second to none.

In the 1890s a team of British archaeologists discover the untouched tomb of Princess Ananka but accidentally bring the mummified body of her High Priest back to life. Three years later back in England a follower of the same Egyptian religion unleashes the mummy to exact grisly revenge on the despoilers of the sacred past.

Lee was great as the mummy and had the perfect body type for the role, again another amazing release from the Hammer Horror Series. But possibly only a decent watch for Cushing/Lee fans.

They say save the best for last! This is my all time favourite Christopher Lee movie. His performance as Lord Summerisle is completely mezmerizing. The story follows a detective as he heads to Summerisle to look for a missing girl named Rowan. But all he finds is an island of pagans who give him the run-around. Now he must not only find the girl but defend his own Christianity.

While the remake of this film was a complete travesty, it had the positive side effect of exposing the original to a new audience, myself included. I am grateful for this, because “The Wicker Man” is wonderful.

For me, this was his best performance in the horror/thriller genre and still all these years later, a timeless classic.