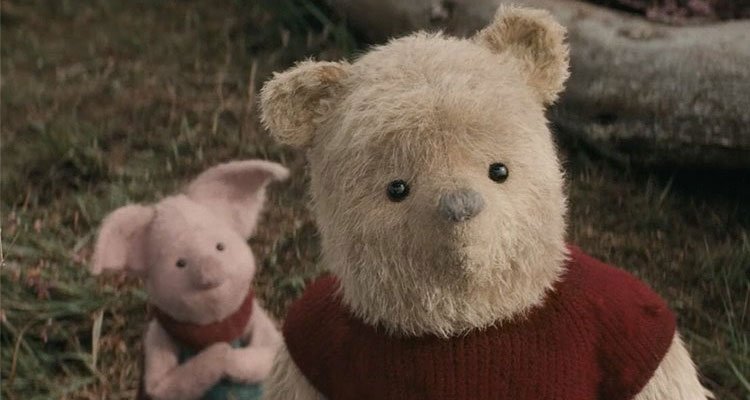 In short: Sweet but hollow

The Plot: Once upon a time, young Christopher Robin played with his furry childhood friends Winne The Pooh, Tigger, Eeyore and Piglet. Then it was time to grow up and put away childish things. Christopher (Ewan McGregor) is now grown up and middle-aged, living with devoted wife Evelyn (Hayley Atwell) and daughter Madeline (Bronte Carmichael). However, Christopher is harried by the pressures of work, where he is an efficiency manager at a luggage company. Work/life balance just wasn’t around in post-WWII London. With cost-cutting expectations placed on him by his arrogant boss Giles (Mark Gatiss), Christopher has to work a long weekend while his family enjoy the last days of summer. It’s at this point that Christopher is re-introduced to an old honey-loving friend, who teaches him the importance of doing nothing…

The Verdict: The second film in the space of a year to have the name Christopher Robin in its title, this new Disney film is a live action glimpse at how childhood memories are never really forgotten. Just set aside by maturity, waiting for a rainy day to resurface. Not that there’s much rain in Christopher Robin. It’s a mostly sunny venture, built upon a relatively simple idea about what happens when a child grows up into a responsible adult. Though, why there are five credited writers is something of a heffalump-sized mystery. Surely a straightforward family film like this didn’t need a committee to make it work?

Work it does… and work it doesn’t. The script is strongest earlier on, establishing the kindly Christopher as a devoted family man who also has a position of some responsibility in his company. The pre-credits scenes show Christopher as a boy, having so much fun with Winnie The Pooh (voiced by Jim Cummings with a consistently laidback air). There’s a lovely contrast between that and the older, more life-experienced Christopher. When Winnie comes back into the picture on a park bench, it’s like old times. The ever-reliable McGregor invests heavily in the belief factor, so Christopher’s slide back into relaxed fun is smooth and more credible. It then becomes a bear-out-of-the-woods adventure on the streets of London, with some amusing results.

After that burst of exuberance, the film loses its way somewhat. It’s as if Finding Neverland director Marc Forster doesn’t quite know how to progress the story to a conclusion that isn’t manipulative or obvious. There are only so many scenes of grown-up Christopher playing with his furry pals in the woods before they become rather silly and childish. His family should have been brought back into the story much earlier, to balance this out. Atwell does well with her under-written supporting wife, but there was much more potential for her character – particularly in assessing how Christopher relates to his wife and his home duties.

Somebody overdosed on the honey and forgot the substance. That’s a fair summation of the film, which is sweet, fuzzy and homely. It’s also hollow and insubstantial, like one of Winnie’s empty honey pots. Watching Christopher Robin is like eating a tub of chocolate ice cream for dinner – you’ll enjoy it, but it’s not a proper meal. However, it’s also worth pointing out that the film went down well with the kids at this reviewer’s screening. Add a star if you’re a kid or an adult-sized Winnie fan. Otherwise, it’s a mixed bag of results that only partially satisfies.