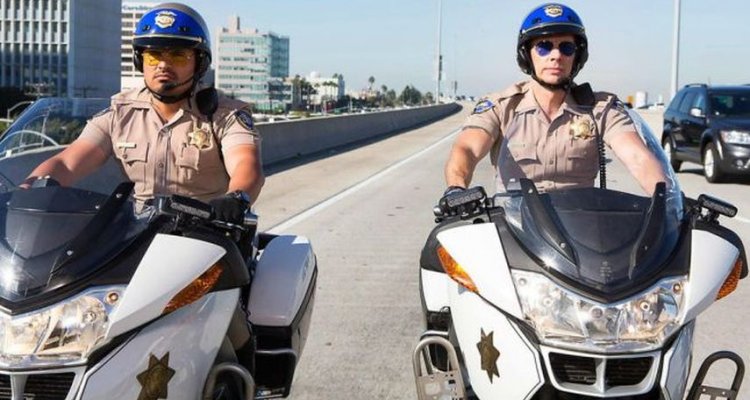 CHIPS (USA/15A/100mins)
Directed by Dax Shepard. Starring Dax Shepard, Kristen Bell, Michael Pena, Adam Brody, Vincent D’Onofrio.
THE PLOT: Rookie California Highway Patrol Officer Jon Baker (Dax Shepard) joins forces with undercover FBI agent Frank ‘Ponch’ Poncherello (Michael Peña) to bust a corruption ring within the CHP, and bring the crooked traffic law enforcers to justice.
THE VERDICT: Based on the TV show of the same name that ran for 6 years until 1983, ‘Chips’ deviates in tone from the light hearted drama than fans remember, and writer/director Dax Shepard struggles to keep the tone on track, and provide many laughs.
Dax Shepard leads the cast as former motorbike stunt rider Jon Baker, who is so desperate to get his wife Karen (Kristen Bell) back that he enlists to the CHP to impress her. Shepard, as with his role in 2012’s Hit and Run, has not written himself a particularly complex role, so he manages it fine. Michael Peña plays another thoroughly unpleasant character after his turn in War on Everyone last year, making Ponch a sex-addicted compulsive masturbator, who is misogynistic and homophobic, and has shot his partner, but still manages to be employed by the FBI. Elsewhere, Vincent D’Onofrio brings his regular brand of nasty as the bad guy, and Ed Begley Jr has a great cameo to the tune of Rosanna by Toto. The rest of the cast features Kristen Bell, Ryan Hansen, Adam Brody, Jessica McNamee, Justin Chatwin, Maya Rudolph and Rosa Salazar.
As well as directing, Dax Shepard penned the screenplay for ‘Chips’, and like his 2012 film Hit and Run, seems to have done it to show off his personal collection of cars, his skills on a motorbike, and have some fun with driving around on LA freeways in the name of a movie. The story swings from being a ridiculous buddy cop movie to a serious drama with no warning at all, and then spends the rest of the film swinging back and forth, never managing to settle on a coherent tone. The jokes, such as they are, use puerile humour to try and get a laugh from the audience, but the misogynistic masturbation jokes never manage to raise a smile, and the characters soon become grating. The chase scenes in the film are fun to begin with, but even these lack the gleeful, light hearted feel of the original TV show, meaning that they are ultimately unmemorable, and never as much fun as they could be.
In all, ‘Chips’ is a tonal mess, and although there are some great actors in the cast, they never truly get a chance to show what they can do. The jokes are puerile and lack sophistication on any level, and the film as a whole gets lost in offensive chaos. Even Erik Estrada’s cameo can’t fix ‘Chips’.
RATING: 2/5
Review by Brogen Hayes