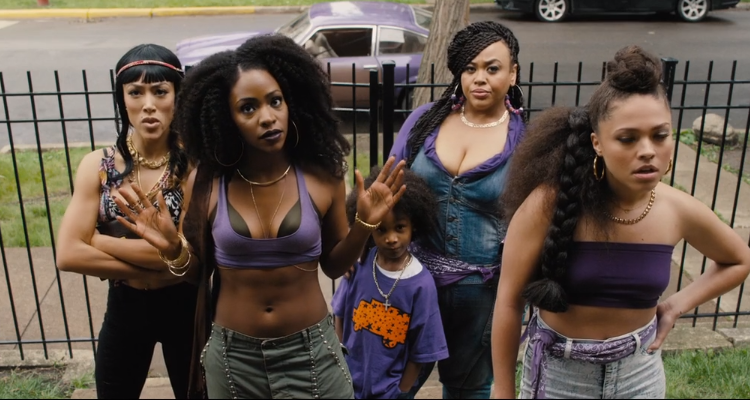 CHI-RAQ (USA/TBC/127mins)
Directed by Spike Lee. Starring Teyonah Parris, Angela Basset, Wesley Snipes, Samuel L. Jackson, Nick Cannon
THE PLOT: Based on the play ‘Lysistrata’ by Aristophanes, ‘Chi-Raq’ takes the events from Ancient Greece and sets them in the south side of present day Chicago. When gun violence gets worse and a young girl is killed, Lysistrata (Teyonah Parris) takes it upon herself to bring the wife’s and girlfriend of rival gangs the Trojans and the Spartans together, and institute a sex strike until peace reigns and violence comes to an end.
THE VERDICT: There have been many attempts to bring the story of ‘Lysistrata’ to the big screen in new and inventive ways, but the idea of setting the story in a gun-riddled American neighbourhood – especially in the wake of the recent US Presidential Election – is an interesting one, but although Parris is strong in her role and she is backed up by some great actors, the muddled tone of ‘Chi-Raq’ ultimately undermines its message.
Teyonah Parris leads the show as the beautiful and tenacious Lysistrata. Parris does a good job with the role, and it is easy to see why the other characters in the film would listen to her. Parris seems to have taken inspiration from the stage presence of Beyoncé, however, and there are times when her performance strays into music video territory. Angela Bassett plays the quieter but strong and educated Miss Helen with grace and charm, Nick Cannon plays Chi-Raq; Lysistrata’s boyfriend and the one who kicked off all the trouble in the first place, and Samuel L. Jackson plays Dolmedes, a one-man Greek chorus, popping up every now and again to try and keep the narrative on track. Also appearing in the film are Jennifer Hudson, Wesley Snipes, and John Cusack, who has a powerful and inspirational speech.
Screenwriters Kevin Willmott and Spike Lee, as mentioned, move an ancient Greek story into the modern day, and for the most part, this is a very good idea. Women coming together and staging a sex strike for peace works for the context of the film and its strong female characters, but there are times when the story begins to get too convoluted, and even Dolmedes turning up to explain things doesn’t clear it all up. As well as this, the tone of ‘Chi-Raq’ is often spotty; Jennifer Hudson as a grieving woman whose daughter was gunned down by accident, and John Cusack’s preacher Father Mike Corridan work well in the first half of the film, but the second half takes a turn for the musical and the comedic, meaning these two characters and their subplot feels as though it belongs in another film.
As director, Spike Lee obviously has fun with the format – substituting rap for the rhyming verse of the original play by Aristophanes – and there is little doubt that there is a message for peace and unity throughout the film, but the overly complicated story takes away the impact of the simple and powerful idea at the heart of the film. As well as this, though the performances are strong, the first half of the film feels dramatic and powerful, while the second feels more like a musical comedy, and the two never truly sit well together. The performances are strong, however, and it is this that saves ‘Chi-Raq’ from being a victim of its own ambition. The trouble is that the people who really should see this film, are not its target demographic.
In all, Spike Lee makes interesting choices in moving ‘Lysistrata’ from ancient Greece to modern day Chicago, and there are times when the film is powerful and moving, and others when it is charming and funny. The trouble is that these two tones do not sit well together, so even though the performances in the film are strong, the impact of the film is betrayed by its ambitious script.
RATING: 3/5
Review by Brogen Hayes