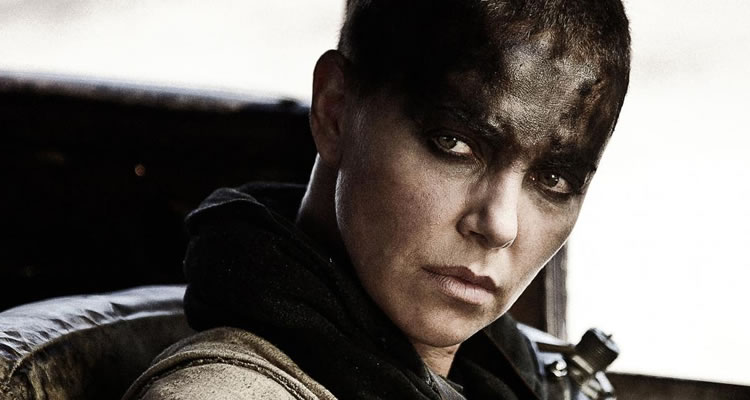 QUESTION: When you first talked to George Miller about Max Max: Fury Road, what drew you to the project and what resonated with you about your character, Furiosa?

CHARLIZE THERON: Well, the whole thing was pretty secret. There was a script, but it was really just a long storyboard. George and I had several conversations, and he communicated what he wanted to do with Furiosa, I think, later on—not necessarily even in this movie. So there was a lot of backstory that he introduced me to, and a real intrigue in what he wanted to do with the film, which felt really honest.

Every time you make a film with somebody, there is this moment where you have to kind of just jump off the cliff with them. But, in this case, I feel like we were blindfolded, because there was very little to go by, except for George as a filmmaker, which is, I think, why we all signed up.

So, for me, what happened with Furiosa was that there was a grain that was really thought out, but the scenes were continuously developing over the years as this project came together. And I think it all happened for a reason, because, at the end of the day, we ended up with a character that I felt was very unique, and somewhat brutally honest. It was interesting for me to play in this world, in a genre where a character’s flaws are celebrated.

QUESTION: Once you’d wrapped your mind around this character, did you feel an ownership of her, and did George welcome your collaboration?

CHARLIZE THERON: Yeah. I think I had ownership because George allowed me to have ownership, you know? As an actor, you can’t just kind of take it. I think it’s really up to the filmmaker to invite you into that, and George is absolutely fantastic and encouraging of collaboration. I think he really wanted that for all of us. For me as an actor, that’s always very important.

He just loves actors, and really loves the process. I mean, we spent a lot of time sitting down one-on-one, or with the group, and just really talking. You can just see in his eyes when something kind of sparks an interest. He grabs a lot of it, and that’s really nice, to work with a director who values actors that way.

QUESTION: Can you talk about who Furiosa is, where she starts out, and your thoughts on the journey she takes in the film?

CHARLIZE THERON: Well, when you watch the movie, you understand certain things about her, but the film is so sparse, and that’s the beauty of it because she really is an enigma. She starts the film in overdrive, helping or kidnapping—we’re not quite sure—these brides of a dictator, Immortan Joe. She basically takes off in one of the trucks, and you don’t quite know whether these girls can trust her, or what she’s planning to do with them. You notice that she’s looking a lot like these Warboys chasing her, and that she’s got an arm missing, and has a mechanical arm. She looks like a boy, but she’s not. I think you can tell that there’s a look of desperate revenge on her face. And I loved all of that.

Her journey starts off that way, and then, obviously, gets derailed when she runs into Max, and she all of a sudden is kind of captured by him. But then, he’s also captured by her. They’re somewhat stuck with each other on this journey to find hope—a journey of hope in a place where there really is no hope.

But she’s this kind of rogue survivor; that’s what she has always been. I think she’s lived a life filled with waiting for the perfect moment to grab her revenge. And I know, because of George telling me, that she was kidnapped to perform certain duties that she could not deliver on, and thus she was discarded in quite a terrible way. We don’t see any of that in the movie, but I think she carries a lot of that emotion with her—of being stolen and then discarded—and is just trying to find a way to rectify that for herself, emotionally.

QUESTION: Some members of this generation are going to be meeting Mad Max for the first time in this film, as played by Tom Hardy. Can you talk about working with Tom and what you think he brings to this role?

CHARLIZE THERON: Yeah. I think that’s great because I remember that my parents were huge fans of the original, so I had an awareness of it through them. But there’s definitely a new generation of people who don’t even know what Mad Max is. And I think that’s the beauty of Fury Road. It’s a standalone movie, but it has elements that definitely connect to the movies from the ‘70s and ‘80s. There are nice little gems, if you know those films, but you don’t need to. And if you know those films, obviously what you know is what Mel Gibson brought to Mad Max.

But I think George was incredibly smart in getting Tom to kind of reinvent this great character, this iconic character, because Tom just doesn’t play by the rules and I think you needed that in order to really create something new. It was pretty brave for him to step into shoes filled by an actor like Mel Gibson. I think it takes a really ballsy, brave actor to not be scared to bring his own thing to it, and yet, at the same time, be respectful of the character that George created with Mel back then, and hang onto the emotional drive that I think is very similar. But he really created something that is, I think, very, very deserving of a new Mad Max film.

QUESTION: I wanted to ask you about your experience shooting the film out on the deserts of Namibia, and driving the War Rig in pretty much nonstop action. What was that like for you?

CHARLIZE THERON: Physically and logistically, it was the hardest film that I’ve definitely ever made. I think you can bear anything for four months, which is normal for a movie. And we shot, I want to say, six months, seven months? Most of the movie was shot in Namibia. We were really in the middle of nowhere.

I think the process of making this movie, too, was very unusual. I don’t think any of us, as actors, has ever experienced a process like this—not really having a script, not necessarily having scene numbers. The demand was to kind of show up and just be in this movie, not necessarily be in the scene you’re shooting that day. We were really living in this world the entire time that we were shooting, for 130 days. So, it was exhausting at times. For everything that we lacked in dialogue, we definitely made up for in physical contact, brute force, and just being in the desert.

There was a physical aspect to this character I had to keep up—upper body strength and a physical look—that was hard because it not necessarily easy for my female body to maintain.
We were meant to shoot this movie three years earlier, and that was like the perfect time in my life, when I wanted to kind of set off and just live in a tent in the middle of a desert by myself. But then, by the time we actually made the movie, my life was quite a bit changed. I had just become a new mom, and I had different responsibilities. So, mentally, it was a little tricky for me to get my head around it.

But, for me, I think all that really helped the movie. Being on that road and the fear we all felt as actors—the not necessarily knowing what was demanded from us every single day—helped us create these characters. I mean, everything about this movie is determined by fear. All of these people are driven by fear and not knowing. And I found my own life to be that while I was shooting it. That was definitely a strange correlation, and one that I am glad was over after eight months, to be quite honest. Because it was really tough.

QUESTION: Is there a moment that you remember during production that was particularly intense to shoot or just took your breath away?

CHARLIZE THERON: There are lot of them. We were shooting with these stunt units, and it’s pretty incredible what they were doing. I think as an actor, you kind of prepare for this stuff that you have to do, and, for me, there were these amazing moments when you see what the stunt people were doing around you that you weren’t prepared for—the work on wires and poles that they were doing in the fight sequences. Getting to do that while you were actually driving the War Rig, and having people kind of fall in and out of the truck while this fight sequence was happening—I mean, it was incredible to watch. Or watching real explosions while you’re doing an action sequence.

You realize you’re really in a world. There’s no CGI. There’s no green screen. This is, really, a director giving you the opportunity to embed in a whole world. And, I mean, as an actor, that’s such a great gift.

There was an element of everybody, in a safe way, wanting to really kind of push this film, and for us, on a physical level, we felt that every single day. There’s a scene where we’re driving the War Rig and I have to hold Tom up when he’s falling out of the truck. And because of my character’s mechanical arm, I was attached to him on a wire, but the wire did drop a little too far below so I had to extend my body out of the window. I mean, I think I was prepared for all of this stuff, but while we were in it, it was a little hairy.

QUESTION: What do you think audiences have to look forward to when they experience Mad Max: Fury Road, and what do hope they take away from it?

CHARLIZE THERON: I hope that the movie speaks to an audience on individual terms, because, for myself, as a moviegoer, that’s why I love movies. So, to say what I hope they take away from it, that’s kind of killing the magic of why I think we make movies. We all go sit in a dark room, and a story takes us somewhere, or does something to us—moves us, makes us angry, makes us laugh. And then we walk out and have disagreements about it. And I think that’s the beauty of film. So, I hope moviegoers experience all of those things.