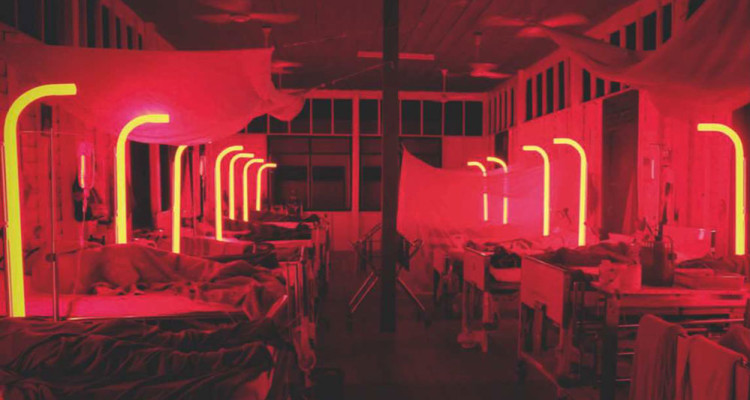 CEMETERY OF SPLENDOUR (Thailand/UK/Germany/France/Malaysia/South Korea/Mexico/USA/Norway/IFI/122mins)
Directed by Apichatpong Weerasethakul. Starring Jenjira Pongpas, Banlop Lomnoi, Jarinpattra Rueangram, Petcharat Chaiburi, Tawatchai Buawat, Sujittraporn Wongsrikeaw.
THE PLOT: A sleeping sickness has struck a ramshackle country hospital, with voluntary nurse Jen (Widner) tending largely to Itt (Lomnoi), bed-ridden and suffering from nacroleptsy. As the entire hospital seems to be asleep – and we never learn why – Jen uses a psychic medium (Rueangram) to communicate with her patient.
And, er, that’s it…
THE VERDICT: One of those singular directors who dares to have a distinct, and brazenly non-commercial, voice, Apichatpong Weeasethakul is the sort of filmmaker who would give Harvey Weinstein a heart attack. And for that alone, we should be eternally grateful.
Not that this particular slaphead film critic has fallen under the Thai filmmaker’s spell as yet. The acclaimed ‘Uncle Boonmee Who Can Recall His Past Lives’ was a strange and wonderful film that didn’t quite so much send a shiver up my spine as simply left me cold. As with much of Apichatpong’s work, on paper, I loved the concept and the imagery of ‘Uncle Boonmee’. Up on screen, the fecker just irritated the crap out of me.
With ‘Cemetery Of Splendour’, the Palme D’Or-winning filmmaker has certainly delivered one of his more accessible film, but it still fecks with the oul’ head. In the best possible taste, of course. But, hey, Weerasethakul is an acquired taste, and staunchly so, which means fans will love this. Whereas thickos like me just don’t quite get it.
RATING: 2/5
Review by Paul Byrne