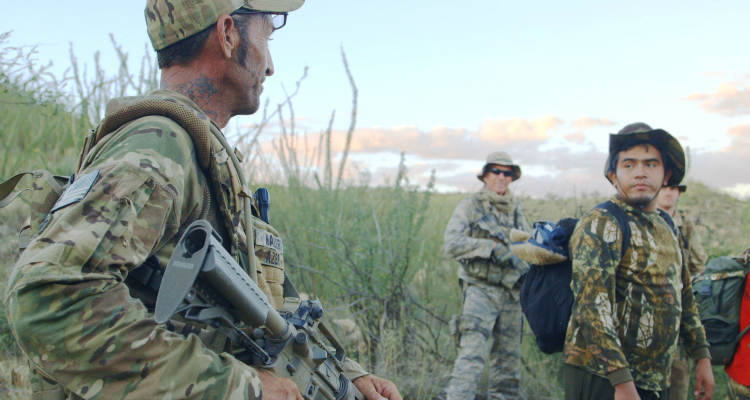 CARTEL LAND (Mexico/USA/Club/98mins)
Directed by Matthew Heneman. Starring Dr. José Mireles, Papa Smurf, Alfredo Castillo.
THE PLOT: We open in a remote Mexican country shack, middle of the night, and a bunch of masked men boasting that they are the no.1 meth cooks in Michoacán – having been taught well by two American chemists. “As long as He allows it,” says one, “we will make drugs.” Cut to Altar Valley, Arizona, an hour and a half out of Tuscon, and Tim ‘Nailer’ Foley leads a bunch of vigilante border patrols, determined to maintain that high fence between these two cultures. Tim’s guys are ‘The Magnificent Seven’. It’s a feeling most likely shared by Dr. José Mireles, founder and leader of Las Defensas, a Mexican vigilante group setting out to rid Michoacán of drug cartels, and are more than willing to take the law into their own hands, given that they believe the police, and federal government, are corrupt. Corruption seems to infiltrate everyone south of the border here, and even as Las Defensas move from town to town, fighting the good fight with growing success, there are divisions and dissidents, and dickheads, emerging within the group. Some clearly enjoy the act of killing just a little too much.
Before long, having survived what appears to be an assassination attempt, the good doc is on the run, from the government, from his divided party and from a justifiably jealous wife…

THE VERDICT: As much Bruckheimer as Broomfield, Matthew Heneman’s look at the fight against Mexico’s drug cartels from both sides of the border is one stylish documentary. This is an examination of people who have stumbled into a bad world and, in this case, some really dramatic lighting. Even the lightning seems to work on cue here.
Concentrating largely on the almost-immediately successful and crowd-pleasing vigilante group The Autodefensas (who started up in February 2013) and its charismatic leader, smalltown doc José Mireles, as they set out to rid Michoacán town-by-town of the Templar Knight drug cartel, we also get to see a vigilante group just over the US/Mexico border, in Altar Valley, Arizona, this one determined to keep the cartels, and illegal Mexicans in general, the hell out of America. The leader here is former alcoholic Tim ‘Nailer’ Foley, who, along with pretty much everyone surrounding him, including his girlfriend, looks like Tim Blake Nelson on steroids.
It’s an incredible tale, almost too well told, Heneman employing so many Hollywood-esque techniques in shooting his documentary that you half-expect during a smalltown funeral scene to have Denzel Washington stride into view, gun cocked at a fleeing helicopter. Heneman doesn’t go full Tony Scott here, thankfully, as the story that unfolds has enough twists and turns, secrets and lies, and cops and robbers cruising that “imaginary line” to ensure that the reality on display is spectacular enough without any slo-mo shootouts. There are shades of THE GODFATHER, or THE SEVEN SAMURAI, albeit with a touch, on occasion, of a traveller feud with a budget.
There are many fascinating moments – such as when Templar Knights Chanque and Caballo are caught by the vigilante law group and are roundly slapped about the head and face and, every now and then, kicked hard in the balls – and if Heneman’s slick production sometimes takes you out of the reality on show, there’s still no denying the powerful truths being revealed here as the lines between heroes and villains becomes increasingly blurred.