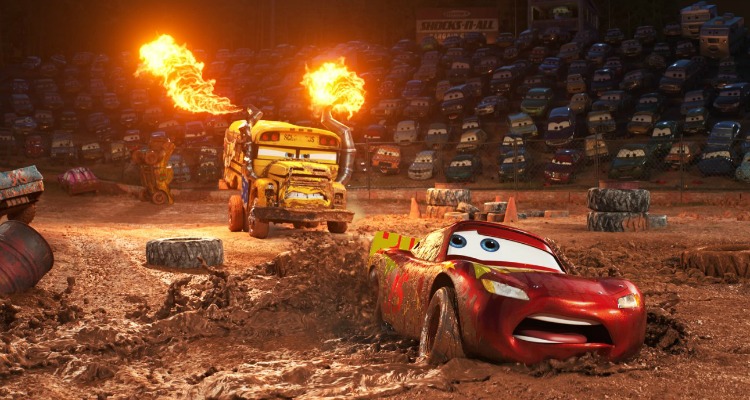 CARS 3 (USA/G/102mins)
Directed by Brian Fee. Starring Owen Wilson, Kerry Washington, Cristela Alonzo, Chris Cooper, Nathan Fillion
THE PLOT: Still racing in the Piston Cup, but far from being the rookie he once was, Lightning McQueen (Owen Wilson) finds himself struggling to keep up with the newer, faster – and more arrogant – cars entering the sport. To keep his edge, McQueen decides to train with the new technology the young cars are using, but when he meets trainer Cruz Ramirez (Cristela Alonzo) he becomes frustrated with her training techniques and decides to do things his own way.
THE VERDICT: The third film in the ‘Cars’ franchise sees Lightning and the gang return in a story more similar to the first ‘Cars’ movie, and way less silly and Mater-heavy than ‘Cars 2’. Brian Fee takes over directing duties from John Lasseter – who is working on Toy Story 4 – and although the film looks great and is beautifully animated, it still suffers from the issues that plagues the last two films in the franchise.
Most of the voice cast return for ‘Cars 3’, with Owen Wilson leading the way as Lightning McQueen, albeit a more sombre and less annoying version of the character. Larry the Cable Guy, Tony Shalhoub and John Ratzenberger are joined by newcomers to the franchise Cristela Alonzo, Chris Cooper, Nathan Fillion, Armie Hammer and Kerry Washington.
The story, written for the screen by Kiel Murray, Bob Peterson and Mike Rich feels very similar to ‘Cars’ in a lot of ways. Gone is the ridiculousness of Mater being a spy, and the film is stripped back to basics as Lightning tries to figure out how to stay competitive. There is a definite feel of familiarity about the film, as themes from the first film are brought to bear in this third instalment, and although the screenplay tries its best to make Lightning a more relatable character, he still comes off as arrogant, albeit someone perhaps those aware of encroaching middle age in the audience may relate to.
As director, Brian Fee manages to make the film entertaining for the most part, but never manages to shake the familiar feeling about ‘Cars 3’. As well as this, there are times when the films pacing sincerely struggles, and not even the zooming race sequences can give the film the energy it so desperately needs. That said, the film is beautifully animated, and the voice cast do well in their roles, but there is little new or different about ‘Cars 3’, and not a lot to hold the attention of the little ones in the audience.
In all, ‘Cars 3’ looks great and the voice cast do well with their roles, but anyone expecting something different from the franchise will be sorely disappointed. As well as this, the pacing struggles from time to time, and none of the characters feel fleshed out enough to keep the audience engaged. Also, the questions we all have about just what happened in the ‘Cars’ universe are not addressed, which just leads to further questions.
RATING: 2/5
Review by Brogen Hayes