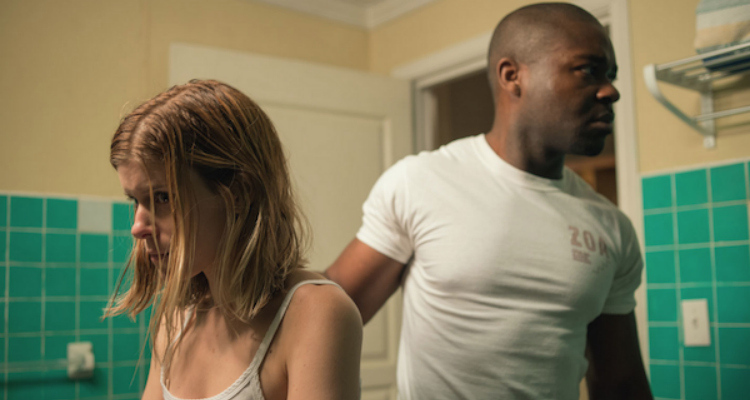 CAPTIVE (USA/12A/97mins)
Directed by Jerry Jameson. Starring Kate Mara, David Oyelowo, Michael Kenneth Williams, Mimi Rogers, Jessica Oyelowo, Leonor Varela
THE PLOT: As he is brought to court to stand trial for the rape of a former girlfriend, Brian Nichol (David Oyelowo) escapes and guns down a judge, a stenographer and a security guard in cold blood. After stealing cars to keep his cover, Nichol forces his way into the home of recovering meth addict Ashley Smith (Kate Mara) and the two spend the night facing their demons.
THE PLOT: CAPTIVE is an odd sort of film; initially reminiscent of last year’s No Good Deed, starring Idris Elba, the film quickly changes tone into a thriller, before twisting again, and becoming a redemption tale with heavy religious overtones. See told you… Odd.
The story is based on events that actually happened, but this does not do much to make the film feel any less strange or uneven. Kate Mara does well as Ashley Smith, the recovering addict who is taken hostage in her home. Although she does not really have a chance to show much range, Mara makes the audience root for her character and sympathise with a woman who is trying – and failing – to get her life together. We all know by now that David Oyelowo is a fantastic actor, and he does well enough here, although he never truly manages to make Nichols menacing or frightening, other than by merit of being physically bigger than his co-star Mara. The rest of the cast is made up of Michael Kenneth Williams, Mimi Rogers, Jessica Oyelowo and Leonor Varela.
Brian Bird’s screenplay, based on Ashley Smith’s memoir of the events that finally caused her to turn her life around, starts off like a typical police thriller. As the film goes on, however, the power of a book given to Ashley – ‘The Purpose Driven Life’ – in terms of the story, is revealed, turning this from a story of survival and fear into one about the fact that God has a purpose for us all. This is all well and good, but it also serves to draw any of the tension or suspense out of the film and, combined with the footage of the real Ashley Smith being interviewed by Oprah at the end of the film, makes the film feel twee and rather hokey.
It is obvious that director Jerry Jameson has had a long and rather successful career in TV, by the way he handles CAPTIVE. The pacing of the film works, the performances are good enough to carry the film, but everything begins to fall apart in the final act as the sense of urgency is lost, and the audience loses track of who is lying to whom. There are parts of the film that work incredibly well, but these slip away toward the end of the film, and the audience is left to fill in the blanks and close the plot holes with their imagination.
In all, CAPTIVE is a film populated with great actors who are never truly given a chance to show off their range. The pacing, story and tension fall away in the final act, only to be replaced with a false feeling belief in God and destiny, that belittles the struggles the characters go through in the rest of the film. A wasted opportunity for sure.
RATING: 2/5
Review by Brogen Hayes