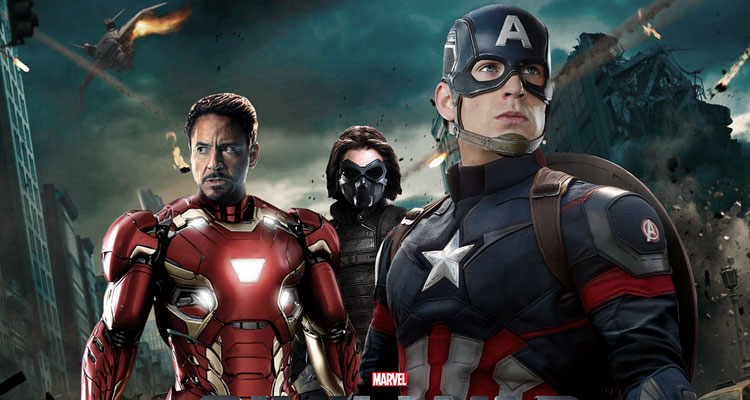 CAPTAIN AMERICA: CIVIL WAR (USA/12A/147mins)
Directed by Anthony Russo, Joe Russo. Starring Chris Evans, Robert Downey Jr, Scarlett Johansson, Sebastian Stan, Anthony Mackie, Don Cheadle, Jeremy Renner, Chadwick Boweman, Paul Bettany, Elizabeth Olsen, Paul Rudd, Emily VanCamp, Marisa Tomei, Tom Holland, Frank Gillo, Martin Freeman, William Hurt, Daniel Bruhl, Hope David, John Slattery, Alfre Woodard.
THE PLOT: With the political pressure tearing the Avengers in two, in the blue corner, Captain America (Evans) who believes that they should be left to fight the good fight without any government interference, whilst in the red corner, Iron Man (Downey) reckons having someone holding the driving wheel for them is necessary. It doesn’t help that, on their latest world-saving mission in Lagos, chasing down some blood-thirsty mercenaries, Scarlet Witch (Olsen) inadvertently sets a high-rise building on fire, killing many innocent civilians. Such collateral damage hasn’t gone unnoticed, and these superheroes will have to start being a little less unhinged and a little more U.N. But which of the two American superheroes will win this internal, eternal American battle?
THE VERDICT: Man, talk about ticking all the boxes.
We don’t normally go for listing so many cast members, but, take a look at that line-up. There’s something for everyone there, and just about every single one of them is worthy of your love attention. Sure, Downey is slowly becoming the new Depp – who’s slowly become the new Cage, who has now become the new Chuck Norris – but, there are just so many good, reliable, solid, huggable actors here.
And what it shows is not so much the budget but the big hairy balls of the Marvel franchise, that smart mix blueprinted by the sometimes-great Jerry Bruckheimer taken to its logical, methodical, almost pathological conclusion. Satisfy every four quadrants of the cinema-going audience, with top-of-the-range action, eye-popping spectacles, a few Shakespearean twists and turns, delivered by sexy, sexy people from the multiplexes and the arthouses, and then just make sure to cram your genre pic with self-deprecating gags. That last part is the crucial ingredient when it comes to any truly loved blockbuster – making the audience laugh, and making them feel like they’re in on the joke. That they’re behind the curtain with the wizard. That your Halloween-costume-worthy lead protagonists are on their way to a kill and they’re just shooting the s**t about Royales with cheese. That this is their team.
It all works here. Beautifully. And lest you think, just because ‘Captain America: Civil War’ bounces along – despite the introduction of major new characters to an already Showaddywaddy-sized ensemble cast – hey, all this crash, bang, box-office wallop is easy, then think about those original ‘X-Men’ movies, and how they buckled under the all-star weight. Think of the woeful ‘Fantastic Four’ outings, twice stepping up to the plate, and twice stinking to high heaven. Most importantly, think about what a piece of s**t ‘Batman vs Superman: Dawn of Justice’ is. That’s when you realise just how good these Marvel movies are…
RATING: 4/5
Review by Paul Byrne