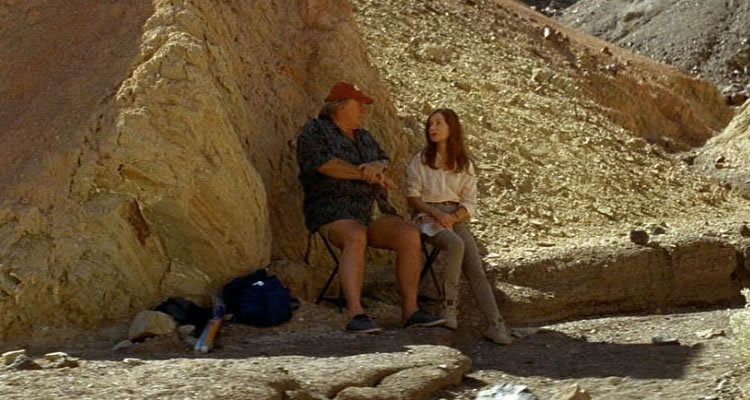 VALLEY OF LOVE (France/TBC/91mins)
Directed by Guillaume Nicloux. Starring Isabelle Huppert, Gerard Depardieu.
THE PLOT: Isabelle (Isabelle Huppert) and Gerard (Gerard Depardieu) meet in the sweltering hot Death Valley. The couple were once married, and their son Michael has sent them letters detailing his suicide, and his plans to return. The stipulation is that both his parents must be present for this to happen, and the site of his return will be one of seven Death Valley landmarks. As the two wait to see their late son, they argue, debate and converse about their lives together, and apart.
THE VERDICT: Guillaume Nicloux’s film reunites Huppert and Depardieu on screen for the first time in 35 years – the last time they worked together being Maurice Pialat’s LOULOU – and while the chemistry between the two actors is as good as you would hope, they are let down by a story that is not nearly as clever as it thinks it is.
As mentioned, Depardieu and Huppert are easy and relaxed on screen together. Even as their characters argue – and they frequently do – it is clear these two actors have a great respect for one another, and strong chemistry. As details of their past life together come to the surface, they become protective and kind to one another, further serving to underline the strength of these two performers.
Guillaume Nicloux’s screenplay wavers between the reality of the relationship between these two people, and the spiritual ‘quest’ the find themselves on. The trouble is that the real is all too real and he metaphysical element of the film is more of an intrusion than a plot twist. That said, the dialogue between the two characters is great, with the exposition and back story always being revealed through an argument or conversation that feels natural and real.
As director, Guillaume Nicloux seems to have thrown all his energy into allowing the audience to get to know these people, their relationship and their grief, but never truly allows the film to feel balanced in all the magic that it is trying to achieve. Christophe Offenstein’s cinematography makes Death Valley look beautifully desolate, and the perfect austere backdrop to the rich emotional conversations happening on screen.
In all, VALLEY OF LOVE never quite strikes the balance between this world and the next, which is a main plot point for the film, and one that audiences are never allowed to get on board with. Huppert and Depardieu are wonderful, however, and it is a shame to see their reunion after 35 years let them down so badly.
RATING: 2.5/5
Review by Brogen Hayes