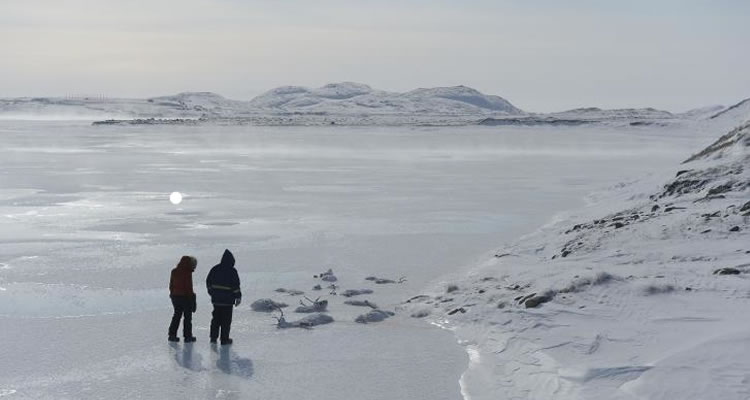 TWO LOVERS AND A BEAR (Canada/TBC/105mins)
Directed by Kim Nguyen. Starring Tatiana Maslany, Dane DeHaan, Gordon Pinsent, John Ralston, Joel Gagne
THE PLOT: Young couple Lucy (Tatiana Maslany) and Roman (Dane DeHaan) live at the very top of the world in a small Canadian town named Apex. Both arriving in the town to escape their past, they were drawn together by shared misfortune. As they set out to try and both face their past and leave it behind them, the pair soon find out just how unforgiving the landscape can be. Oh, and Roman can talk to polar bears.
THE VERDICT: Oscar nominated director Kim Nguyen’s film ‘Two Lovers and a Bear’ premiered at the Director’s Fortnight section of the 2016 Cannes Film Festival, and tells a love story with a sci-fi twist.
Dane DeHaan leads the cast as Roman, a young man who moved to the aptly named Apex after he kicked his father so hard that he broke his own ankle. Dark and tortured, DeHaan also makes sure to give Roman a sweet and gentle side, making him so protective of Lucy, even though this sometimes manifests in unconventional ways. Tatiana Maslany makes Lucy tenacious and kind, but seemingly unable to deal with the emotions that her past keeps throwing at her. The rest of the cast features John Ralston, Kakki Peter, and Gordon Pinsent as the voice of the titular bear.
Director Kim Nguyen’s screenplay for the film focuses on the burning romance between these two damaged characters, and setting this intense passion against the bleak coldness of the landscape is a lovely juxtaposition. The relationship between the two characters feels honest and relatable, but the film sometimes struggles with the stranger, more unnatural elements, such as the fact that Roman can indeed communicate with bears, and a jaunt into an abandoned military base becomes more like a horror movie than an eerie indie.
As director, Nguyen pus the love story at the centre of the film, while allowing any strangeness in the film to exist without judgement, and just to be part of the world that Lucy and Roman find themselves in. As well as this, Nguyen uses music sparingly but to great effect – especially The White Stripes’ ‘Seven Nation Army’ – while blending a love story, an action movie – there are scenes reminiscent of ‘127 Hours’ – and a wonderfully weird storyline that allows a character to talk to a polar bear. More polar bear action would have made the film stronger, however, and there are times when the film struggles to blend all these elements together in one cohesive whole. Far from being a tale about love conquering all however, ‘Two Lovers and a Bear’ feels real in its real, human and tragic finale.
In all, ‘Two Lovers and a Bear’ – which takes its title from a joke told by Maslany’s character – is a weird look at the seeming power of love, with DeHaan and Maslany easily carrying the weight of the story on their shoulders. There are times when the film struggles to feel cohesive, meaning the pace drops, and there is definitely room for more polar bear chats.
RATING: 3/5
Review by Brogen Hayes