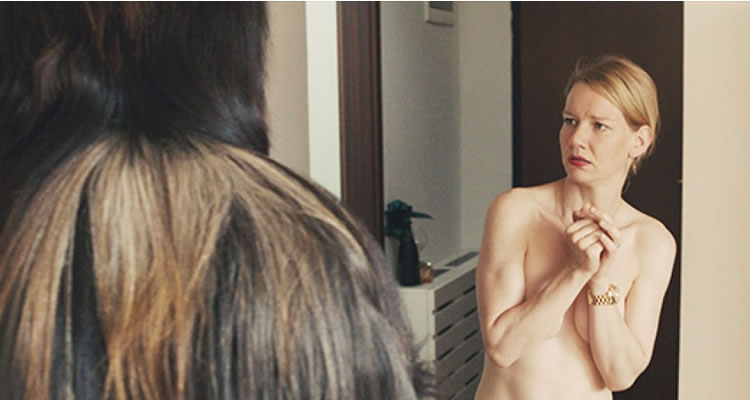 TONI ERDMANN (Germany | Austria/TBC/162mins)
Directed by Maren Ade. Starring Peter Simonischek, Sandra Hüller, Michael Wittenborn, Thomas Loibl, Trystan Pütter.
THE PLOT: Winfried Conradi (Peter Simonischek) is a man who loves a practical joke; painting his face, putting in false teeth and convincing the postman that he is his own twin brother; a man named Toni Erdmann. When Winifried’s daughter Ines (Sandra Hüller) returns home from Bucharest – where she lives for work – a quietly observed moment makes Winifried realise how little he knows his daughter, so he sets out to try to reconnect with her the only way he knows how; with his alter ego Toni Erdmann.
THE VERDICT: ‘Toni Erdmann’ is one of five films at the Cannes Film Festival this year that are over 2 and a half hours long, and although the story has a powerful message and a rather silly but engaging story at its heart, this is swallowed up by the 162 minute – count ‘em! – running time.
Peter Simonischek easily carries his portion of the film as a lonely man whose family feel further away from him than they ever have. Simonischek permeates his performance with a sense of loneliness, which is palpable at times, but manages to make the character playful, meaning his transforming into his alter ego Toni Erdmann is believable if a little far fetched. Sandra Hüller makes Ines tightly wound and impatient for much of the film, although it is never truly clear why she goes along with her Dad’s pretence that he is someone else – for the sake of a quiet life, perhaps – but she is also capable of carrying the time she is given, even if she and Simonischek are let down by a meandering, bloated script. The rest of the cast features Michael Wittenborn, Thomas Loibl, Trystan Pütter, Hadewych Minis, Lucy Russel and Ingrid Bisu in smaller roles.
Writer / director Maren Ade manages to make the characters likeable in her screenplay for the film, with the dialogue often painfully honest, but she does not seem to know when less is more, since the film meanders through its first hour, and it is not until the focus of the film switches and Ines becomes the protagonist that things become interesting. Even then, the screenplay is not tight enough to maintain the action, with scenes often going on far too long, scenes and subplots that could have been cut for the sake of emphasising emotion, and the transition that Ines goes through seemingly coming from nowhere, as she changes her clothes.
As director, Maren Ade gets strong performances from her entire cast – none more so than the two leads – but badly lets them down with meandering pacing and a bloated running time. Making ‘Toni Erdmann’ a film of 100 minutes would have made for a stronger emotional engagement, more laughs – although the Cannes audience seemed to have a great time, on the whole – and a clear narrative arc throughout the film.
In all, ‘Toni Erdmann’ would have been a wonderful film if it was an hour shorter. As it stands, Peter Simonischek and Sandra Hüller are wonderful in their roles, but the film around them is bloated, meandering and feels rather self indulgent.
RATING: 2.5/5
Review by Brogen Hayes