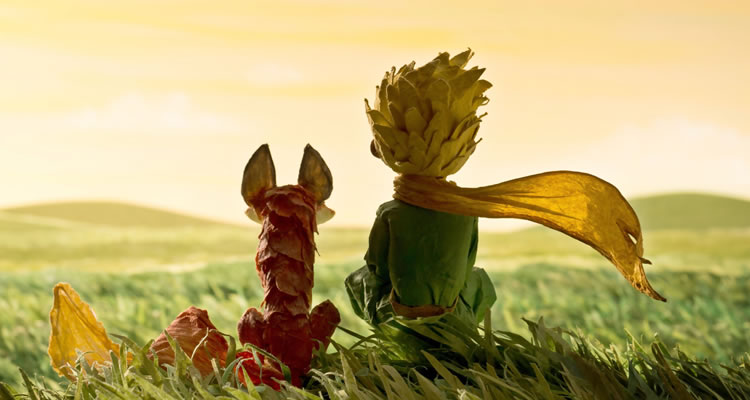 THE LITTLE PRINCE (France/TBC/108mins)
Directed by Mark Osborne. Starring Rachel McAdams, Paul Rudd, James Franco, Marion Cotillard, Mackenzie Foy, Jeff Bridges, Benicio Del Toro, Paul Giamatti, Bud Cort.
THE PLOT: Desperate to get into a good school and get her life on track, a 9 year old little girl (Mackenzie Foy) and her mother (Rachel McAdams) devise a plan of study and hard work for the summer. To be in with a chance of being in the right catchment area, the family move into a house next door to a crumbling but brightly coloured house, that doesn’t fit in with any of the others on the street. It is here that The Aviator (Jeff Bridges) lives, and it is not long before he had befriended the little girl with his tales of The Little Prince, and she has forgotten all about her summer of work.
THE VERDICT: Inspired by Antoine de Saint-Exupéry’s classic and beloved novel of the same name, this new film version plays with the conventions of the novel, making it part of a larger, more contemporary story.
The voice cast are great in THE LITTLE PRINCE, being as it is made up of Jeff Bridges, Rachel McAdams, Paul Rudd, Marion Cotillard, Benicio Del Toro, Paul Giamatti and Bud Cort. Each brings life and charisma to their character, making the iflm feel like a real and inclusive world.
Irena Brignull’s screenplay, based on a story by Mark Osborne and Bob Persichetti, which is in turn based on de Saint-Exupéry’s book takes the famous tale of THE LITTLE PRINCE, adds a touch of CORALINE and uses it as a story within the film. Now, the film becomes the story of a little girl learning the lessons we all did from THE LITTLE PRINCE; lessons of love and life, of valuing other things than the material and that even though people often leave, they are never truly gone forever. As well as this, there is an action adventure sequence at the end of the film that feels organic at the time, but since it is never mentioned again – and could well have been active imagination on the part of the little girl – at the end of the film it suddenly feels less genuine than it did at the time. However, the film is simply and beautifully put together, with heartbreak, tears and giggles coming in equal measure.
As director, Mark Osborne makes THE LITTLE PRINCE a story of friendship and acceptance, and not trying to control every inch of life, as much of it is out of our control anyway. The detail in the film is beautiful, with a tiny fox becoming the comic heart of the action.
Animation wise, the film is told through both CG and beautiful stop motion animation, giving the ‘real world’ of the film a heightened feel, and the story of the Little Prince the feeling that if you reached out far enough, you could hold these characters in your hands. That, of course, is the feeling from de Saint-Exupéry’s wonderful book. Using two styles of animation works incredibly well, and gives the audience a feel of the vintage and timeless nature of the book.
In all, THE LITTLE PRINCE is a new spin on de Saint- Exupéry’s classic tale, and is reimagined for a whole new audience. The film is beautifully framed through the eyes of a little girl and the animation is beautiful although the fantasy sequence toward the end of the film doesn’t quite fit with the rest, since it is ignored as soon as it is brought up. I need a toy fox though, and sharpish!
RATING: 4/5
Review by Brogen Hayes