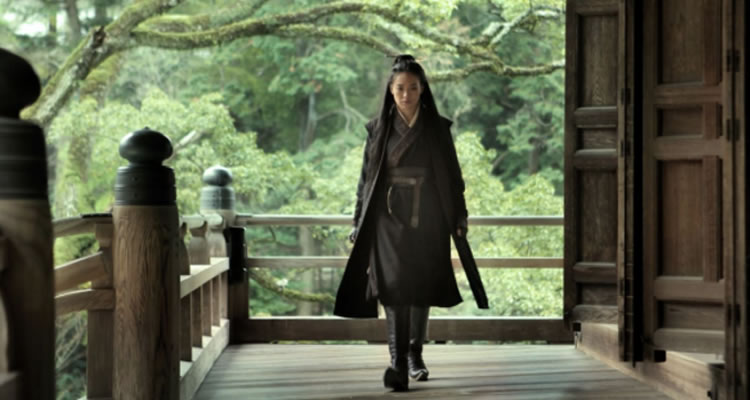 THE ASSASSIN (Taiwan/TBC/120mins)
Directed by Hou Hsiao-Hsien. Starring Shen Qi, Sheu Fang-yi, Chang Chen.
THE PLOT: In 7th century China, Yinnang (Shu Qi) a trained assassin is sent to execute a governor. When she balks at the mission because the governor’s child was there, the ‘princess-nun’ Jiaxin (Sheu Fang-yi) sends her back to her home in Weibo to kill her cousin Tian (Chang Chen), the governor of the region. Returning home is a challenge for Yinnang, not least because she and her cousin used to be incredibly close.
THE VERDICT: Director Hou Hsiao-Hsien takes on Chinese and Taiwanese myth in THE ASSASSIN, filling the film with beautiful cinematography, parables about birds and a plot that is almost impossible to follow. Shu Qi embodies the stillness and resolve of the martial arts assassin as Yinnang, but although this is a character obviously plagued with memories and questions of morality, we rarely see this on the surface of the film, instead being left to guess at her motivations when her actions are revealed. Chang Chen makes Tiang arrogant but with a kind streak; a man who obviously enjoys the lavish lifestyle he has come accustomed to, but is internally as conflicted as his cousin.
T’ien-wen Chu’s screenplay opens powerfully, with Yinnag sent out to kill, and doing so with aplomb. The film continues well until the politics of China at the time, the delicate peace between the regions and the family woes creep onto the screen, when The Assassin turns into a rambling, confusing and ambiguous affair, with the audience not sure where their loyalties should lie.
As director, Hou Hsiao-Hsien has created an atmospheric piece, thanks to a huge contribution from cinematographer Mark Lee Ping-bing who switches from black and white to colour early on, and plays with light and darkness throughout. The Assassin is a slowly paced and often torturous film, with the incredibly brief but thrilling martial arts sequences, and a touch of the supernatural doing little to alleviate the unclear plot and rambling story. Walkouts were plenty at the press screening in Cannes. When it all comes back together, however, The Assassin makes a kind of beautiful sense, but since this is only achieved in hindsight, it is hard to appreciate the film at the time.
In all, THE ASSASSIN is a film that benefits from hindsight; the plot is a mess, the pacing arduous at times but Shu Qi is wonderful and the cinematography is delightful. It’s just a shame these two wonderful contributions lack a coherent story to keep them together.
RATING: 2.5/5
Review by Brogen Hayes