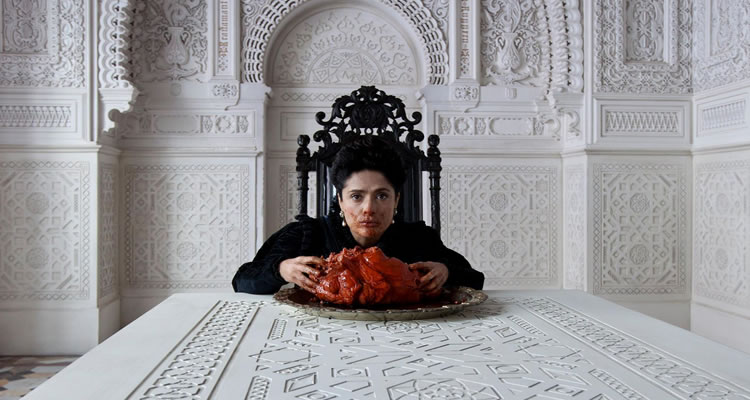 TALE OF TALES (Italy | France | UK/TBC/125mins)
Directed by Matteo Garrone. Starring John C. Reilly, Salma Hayek, Toby Jones, Vincent Cassel, Shirley Henderson, Hayley Carmichael, Bebe Cave, Jonah Lees, Christian Lees.
THE PLOT: Matteo Garrone returns to Cannes with a triptych of fairytales set in a grotesque and beautiful world. A queen (Salma Hayek) longs for a child, and goes to extreme and dangerous lengths to fulfil her dreams. King of Strongcliff (Vincent Cassel) finds his sexual appetite insatiable until he meets a woman who is not quite all she claims, and the King of Highhills’ (Toby Jones) obsession with a performing flea spells disaster for his young daughter.
THE VERDICT: It seems that Matteo Garrone has a fascination with the fantastic and mythical – his previous film REALITY starred an actor let out of prison to film, and focused on a man’s desperate attempts to get on the Italian version of Big Brother – so it makes sense that the director has turned his hand to a 17th century collection of fairy tales by Italian author Giambattista Basile in his first English language film.
Salma Hayek and John C. Reilly play our first set of Royals, those of Longtrellis; Reilly caring and devoted, Hayek single minded and ever more obsessed with her goal to become a mother. Both do well with their roles, with Hayek’s frosty and unscrupulous queen shining through. Vincent Cassel brings humour to the film as the sex addict king; alternating between charming and frightening. Toby Jones plays perhaps the most innocent and naïve of all the royals, making his character child like in some ways, but as single minded as the others, albeit in a different manner. Shirley Henderson and Hayley Carmichael, heavily made up, playing ancient sisters who dream of a more glamorous life. Henderson in particular, treads the thin line between comedy and tragedy with care and ease, at once frustrating the audience, and making us mourn her innocence. Christian and Jonah Lees play Elias and Jonah, the mystical children born to both the Queen and the servant who prepared her magical feast. The two work well together, and seem to enjoy their little time on screen together. Bebe Cave plays the king’s daughter Violet, and brings both strength and vulnerability to the role.
The screenplay, based on Giambattista Basile’s stories and adapted for the screen by Edoardo Albinati, Ugo Chiti, Matteo Garrone and Massimo Gaudioso focuses on the fantastical; there are elements of mystery and magic to each of the stories, as well as grotesque fascination and violence. The dialogue swings from comedic to tragic, mining the dark vein that runs through each of the stories. Although each tale focuses on Royalty – and they all come together in the end – and a theme of greed and obsession leading to ruin runs through each of them, there are times when these beautiful stories don’t seem to exist in the same space as one another. This leaves the film feeling slightly disconnected, and the promise of all three tying together with a moral or a shared conclusion never comes to fruition.
As director, Garrone has created a beautiful and fantastic film, with the three stories that clearly exist in the same world, if not the same space. The film has a feel of The Princess Bride, Neil Gaiman’s stories, and Dave McKean’s artworks about it, and Peter Suschitzky’s cinematography is beautiful, bringing this feeling to the fore of the film, playing with colour, light and striking images. Garrone has coxed strong performances from his actors, with Shirley Henderson standing out, but never manages to make the three exist in an easy union.
In all, TALE OF TALES is a beautiful collection of dark, twisted and often funny stories, individually told in a gripping manner. It is only when trying to assemble the three tales into a single film that Garrone’s vision falls apart.
RATING: 4/5
Review by Brogen Hayes