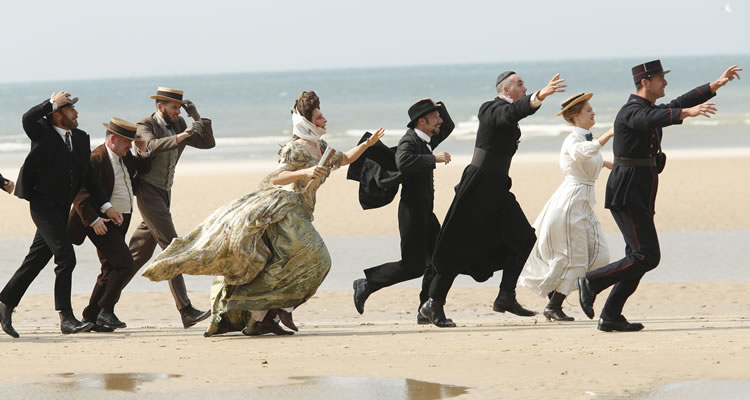 SLACK BAY (Germany | France/TBC/122mins)
Directed by Bruno Dumont. Starring Fabrice Luchini, Juliette Binoche, Valeria Bruni Tedeschi, Jean-Luc Vincent, Didier Desprès, Brandon Lavieville, Cyril Rigaux, Raph
THE PLOT: Each summer, the Van Peteghem family visit the seaside. More specifically, they stay in their home overlooking the windswept, barren but oddly beautiful bay, that seems only to be home to mussel gatherers, who moonlight as untraditional ferrymen for those wanting to cross the bay. This summer, however, people are going missing, people that the bumbling police offier from Calais, Alfred Machin (Didier Desprès) has been sent to look for.
THE VERDICT: From reading the synopsis of ‘Slack Bay’ above, it would seem that the film is a straightforward drama set in a French inlet, but in fact, Bruno Dumont’s offering at this year’s Cannes Film Festival is far from straightforward and the only thing dramatic about it is the hysterical, melodramatic and intentionally over the top performances on show here.
The cast features Fabrice Luchini, Juliette Binoche, Valeria Bruni Tedeschi, Jean-Luc Vincent, Didier Desprès, Brandon Lavieville, Cyril Rigaux and the interestingly mononymous Raph. Luchini is wonderful as the foppish, physically strange and eccentric head of the Van Peteghem family, André, Juliette Binoche mines every melodramatic moment that she can get her hands on, Brandon Lavieville channels the strange as Ma Loute – whom, interestingly, the film is named after in it’s French title – and Raph makes her character Billie, who often cross dresses, as straightforward yet mysterious as her character description suggests.
The story, written by Bruno Dumont, does not follow much of a narrative arc, leaving the film to spend time with these characters without the audience ever really knowing why. It does seem like the missing people storyline could take centre stage a few times in the film, but it never truly does – and actually seems to be more of a reversal of fortune statement on today’s society – so we are left to laugh at these ridiculously over the top characters who, truth be told, are entertaining but not all that likeable.
As director, Bruno Dumont makes ‘Slack Bay’ a strange, existential comedy that is full of absurd and surreal moment at which the audience is helpless to do anything but laugh. Moments of sweetness punctuate the film, which give us a truer sense of the characters, but these give way to people who float, hysteria and a storyline that could have been wrapped up with one line of dialogue, which was obviously left out for a reason.
In all, ‘Slack Bay’ is bonkers, hilarious and over the top, but unsatisfying in terms of story. A clearer narrative arc would have got rid of some of the more drifty moments in the film, but then this could have also ruined the existential debate that rages throughout the film. Hard to tell, but a question we are unlikely to have answered.
RATING: 3/5
Review by Brogen Hayes