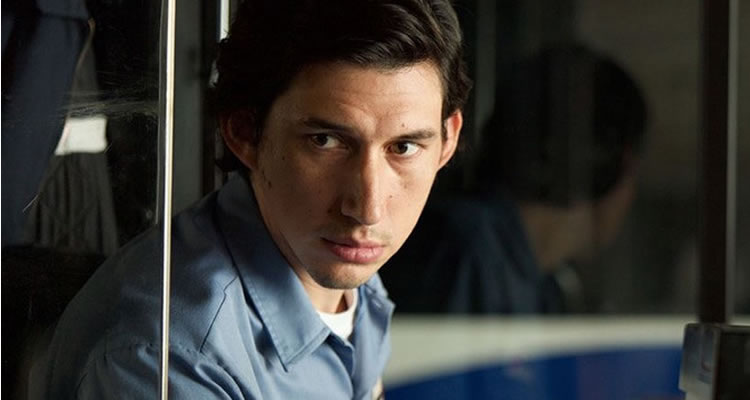 PATERSON (USA/TBC/113mins)
Directed by Jim Jarmusch. Starring Adam Driver, Golshifteh Farahani, William Jackson Harper, Kara Hayward, Frank Harts, Barry Shabaka Henley, Method Man
THE PLOT: Paterson (Adam Driver) still lives in the town he grew up in, a town he was named after. Driving buses for a living, and living a seemingly charmed life with a girlfriend who loves him, a dog who doesn’t and a nightly routine of going for a drink in the same bar, while out walking the dog. So why can’t this aspiring poet write?
THE VERDICT: The first of Jim Jarmusch’s films screening at Cannes – the second being the Stooges flick ‘Gimme Danger’ – ‘Paterson’ is a quiet, loving and engaging examination of life in a small New Jersey town, as well as creativity and ambition in this beautifully shot film.
Adam Driver seems to relish the chance to play a quieter character on screen than we have seen from him of late; Paterson is a man quite content with his life, who enjoys listening to the conversations between people on the bus he drives, and sitting by the waterfall on his lunch break, while trying to write poetry like his hero William Carlos Williams. Driver makes Paterson sweet and gentle, with a charm and charisma that draws people to him; he is unobtrusive and slow to anger, but quick to defend others in situations where he can. Driver makes Paterson magnetic with a wonderfully understated and quiet performance.
Golshifteh Farahani plays Paterson’s girlfriend Laura, a veritable whirlwind of energy and creativity when compared to her more pensive boyfriend. Always painting, baking or expressing a new lifelong dream that Paterson has seemingly never heard before, Farahani has no qualms about making Laura seem superficial and flighty as she flits from one idea to another, often in the same sentence, and over the course of a week, paints almost everything in the house black and white, including the curtains and her dress. The rest of the cast features William Jackson Harper, Kara Hayward, Frank Harts, Barry Shabaka Henley and Method Man.
Jim Jarmusch’s screenplay follows Paterson over the course of a week; showcasing the routine of his work day life – work, lunch, dinner, walk the dog, drink – but also the sweetness that comes in these moments; of waking up in the morning and hearing your partner tell you their dreams, listening to conversations about the history of the town and sitting by the waterfall while eating lunch and writing. Jarmusch also showcases the calmness of the title character, while throwing adversity at him that he takes in his stride, and only ever struggling to come up with engaging poerty.
As director, Jarmusch allows ‘Paterson’ to be a slow film that is content with observing the title character’s day to day life. While slow, the pacing of the film works in showing the repetitive nature of daily life, and is almost lyrical in the manner the days flow through the film. The performances are all strong, even the smallest ones are engaging and contribute to the overall feel of the film. As well as this, Paterson is beautifully shot, showing off the beauty of this small New Jersey town and the pleasures to be found in the everyday.
In all, ‘Paterson’ is a beautiful observation of life, of love and the desire to create not always translating into actual creativity. Adam Driver leads a strong and engaging cast, and carries the quietness of the film easily. Paterson is a beautiful contrast to Adam’s previous films, and a film that may make audiences appreciate the beauty found every day.
RATING: 4/5
Review by Brogen Hayes