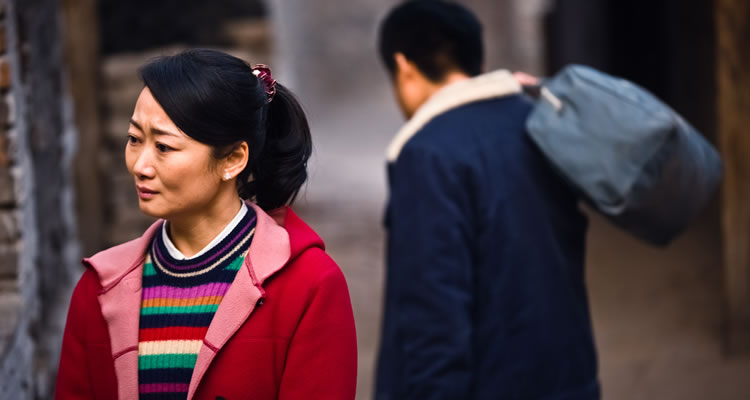 MOUNTAINS MAY DEPART (China/TBC/131mins)
Directed by Jia Zhang-Ke. Starring Zhao Tao, Liang Jingdong, Zhang Yi.
THE PLOT: Jia Zhang-ke tackles the issue of China’s Westernisation in this drama. Told through the relationships between Tao (Zhao Tao), Liang (Liang Jingdong) and Jingsheng (Zhang Yi), the film spans 26 years in the lives of the characters, and the emotional changes they go through as the world changes around them.
THE VERDICT: MOUNTAINS MAY DEPART could well be a strong comment on where the world is headed as we become more globalised and homogenised, but since this is hammered home in the opening scene, where Chinese dancers celebrate 1999 by dancing to the Pet Shop Boys’ Go West, the rest of the film feels a little like a waste of time.
The performances from the central trio, Zhao Tao, Liang Jingdong and Zhang Yi are what hold the film together, and although their choices may be understandable, they are often sudden and strange; such as Tao leaving her coal mining friend to shack up with the arrogant and self absorbed Jingsheng, and the ludicrous decision to name her child Dollar.
The story, written by director Zhangke Jia is drawn out and messy, with characters being forced out of the picture for no reason, making selfish and strange decisions. The idea is obviously to comment on the homogenisation and Westernisation of China, but this is simultaneously too subtle and too obvious to work properly. Framing the tale through romantic entanglements and health issues only serves to muddy the waters further, making the film a confusing and messy one, at best.
As director, Zhangke Jia tries to span 26 years – 1999, 2014 and 2025 – and rooting our involvement with technology and language in these characters, but this does not always work. As well as this, there are some truly shockingly bad performances throughout the film; some actors are jarring and startling in their wooden portrayal of minor characters.
At once a romantic drama, a comment on industrialisation and a glimpse into what may come in the future, Mountains May Depart tries to deliver a clear message, but becomes muddled and vague. There is a strong message in there, but it suffers from being hammered home too many times. MOUNTAINS MAY DEPART, but at 2 hours 11 minutes, this film feels like it never will. Sorry. I’ll get my coat.
RATING: 1/5
Review by Brogen Hayes