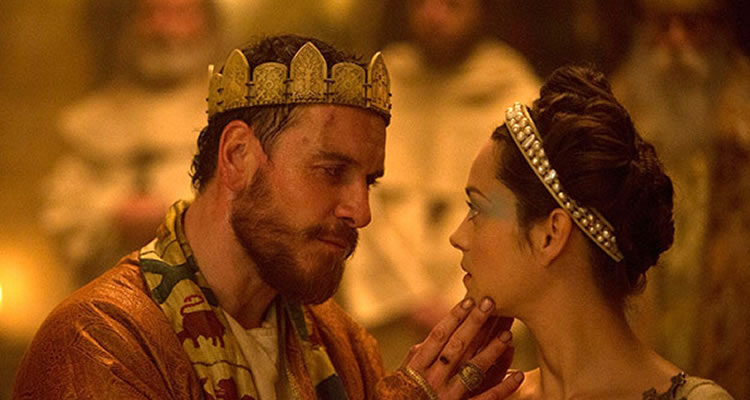 MACBETH (UK | USA | France/TBC/113mins)
Directed by Justin Kurzel. Starring Muichael Fassbender, Marion Cotillard, Jack Reynor, David Thewlis, Paddy Considine.
THE PLOT: As Scotland tears itself apart with civil war, Macbeth (Michael Fassbender) hears a prophecy from a trio of witches, saying he will one day be king of the country he is fighting for. Pushed into action by his manipulative wife (Marion Coitillard), Macbeth takes matters into his own hands, and decides to make the prophecy come true.
THE VERDICT: MACBETH is the final film to screen In Competition at Cannes in 2015, directed by Justin Kurzel, whose 2011 film SNOWTOWN played at the Critics Week’s selection at Cannes that year. While it is heartening to see a talented director move through the ranks of the festival and return to compete for the Palme D’Or, there are serious issues with his adaptation of Macbeth.
Michael Fassbender takes on the role of the title character and, although his presence on screen is magnetic and strong, it is often heard to hear what he is saying, since he mumbles his way through much of the Shakespearean dialogue in a thick Scottish accent. Marion Cotillard’s presence is equally as strong but she too suffers from audibility problems. That said, when the two come together – and can be understood – they are a force to be reckoned with in terms of sheer skill and screen presence. The rest of the cast – David Thewlis, Jack Reynor, Paddy Considine, Sean Harris and David Heyman – also suffer since they are often unintelligible.
Jacob Koskoff, Michael Lesslie and Todd Louiso’s screenplay has removed chunks out of Shakespeare’s original story, which works for the most part, but does leave some choices made by characters feeling surprising and unexpected.
Director Justin Kurzel has moved away from the gritty feel of SNOWTOWN, making Macbeth look and feel like a war movie, with a lyrical and beautiful quality. The cinematography is simply stunning, and the choices to use both slow motion and speeded up footage add to the confusion felt by Macbeth as he fights to make the witches’ prophecy come true. That said, however, much of the cast spend the film mumbling into one another’s faces, rendering heir dialogue inaudible – the French subtitles at Cannes went some way to helping with this – and the choice to have score music playing almost consistently through the film only serves to make this worse.
In all, MACBETH is sure to be a strong adaptation of Shakespeare’s play, but since so much of the film is unintelligible, the power of the performances is lost in an auditory jumble.
RATING: 2.5/5
Review by Brogen Hayes