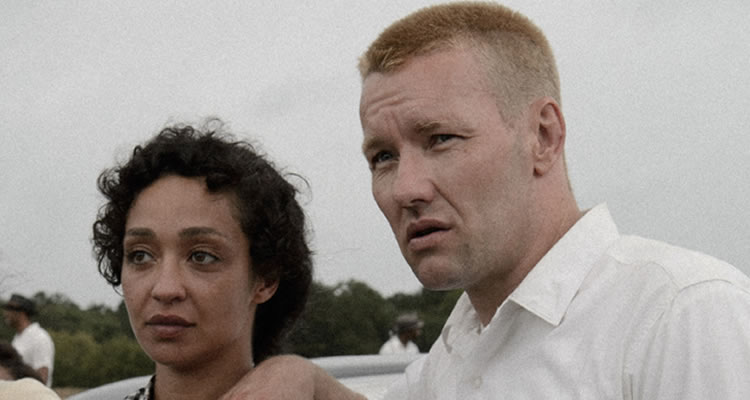 LOVING (USA | UK/TBC/123mins)
Directed by Jeff Nichols. Starring Joel Edgerton, Ruth Negga, Nick Kroll, Michael Shannon, Martin Csokas
THE PLOT: When Richard Loving (Joel Edgerton) and Mildred (Ruth Negga) marry in secret before returning to their home in Virginia. In 1950s American however, marriage between a white man and a black woman is not accepted by local authorities, and it is not long before the newly wed Lovings are arrested and ordered to leave the State, not to return for 25 years. The Lovings accept their fate until one of their children in hurt while playing on the street; the ensuing court battle to allow the couple and their children to return home changed US law forever.
THE VERDICT: In the wake of ‘Midnight Special’ being released in cinemas recently, ‘Loving’ is a distinct change of pace and storytelling for Jeff Nichols. None of the eerie strangeness that has become the director’s trademark is present in this film, but this examination of a small story feels like a Nichols film, as well as the strong themes of family and home.
Joel Edgerton leads the cast as Richard Loving a man “born in the wrong place”, as he is reminded by the police officer who arrests him. Edgerton makes Richard a quiet man who cannot truly understand why the state of Virginia would have a problem with the fact that he fell in love with a black woman. Edgerton is quiet and strong in the film, and he works incredibly well with Ruth Negga. Negga makes Mildred more tenacious than her husband; someone who has struggled with discrimination all her life and has had no choice but to take it. Negga and Edgerton compliment one another well in their performances, and Loving cements Negga’s place as an Irish actress on the rise. The rest of the cast includes Martin Csokas, Alaono Miller, Nick Kroll in a rare dramatic role, and a beautifully understated cameo from Michael Shannon as a Time photographer, through whose eyes the bond between the Lovings becomes abundantly clear.
Jeff Nichols’ screenplay quietly deals with the issue of marriage equality, and is a story that can easily be applied to the same sex marriage debate, which continues to rage around the world. The story is told through the characters, and not the showy court battles, meaning Nichols makes Loving an intimate and personal story, and one that the audience can elate to.
As director, Jeff Nichols makes all the performances strong but quiet; there are no legal battles on screen and each stage of the process is dealt with with a quiet dignity from all of the characters. The pacing is languid, allowing the prospect of this battle ending up in the Supreme Court to slowly rear its head, and the injustices to be felt on the small scale; this is a story that takes place in homes around the country; not with a million man march, and protests in the streets, but it is here that the film’s strength lies, in making the people the heart of the tale. Nichols’ trademark otherworldliness is missed at times throughout the film, as this Is a change for the director, but once again, this is an examination of a small corner of Americana that is hugely affecting.
In all, Loving is a story about love in all its small cosiness, and great ability to influence change. The performances are strong, quiet and dignified, treating this true story with care, while giving it the attention that it truly deserves.
RATING: 4.5/5
Review by Brogen Hayes

Review by Brogen Hayes
4.5
The power of love