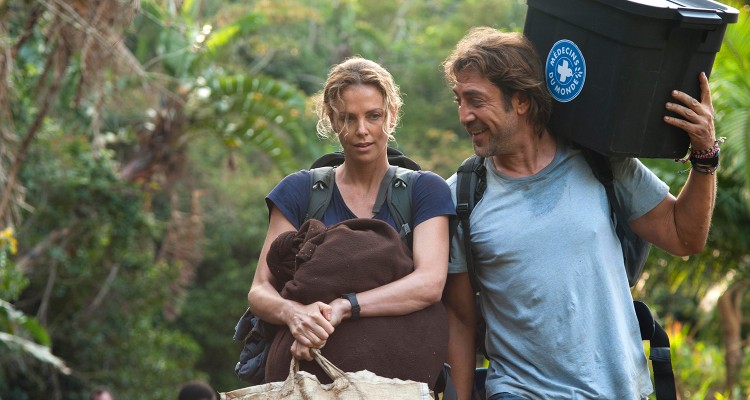 THE LAST FACE (USA/TBC/132mins)
Directed by Sean Penn. Starring Charlize Theron, Javier Bardem, Jared Harris, Jean Reno, Adèle Exarchopoulos, Hopper Jack Penn.
THE PLOT: Wren (Charlize Theron) and Miguel (Javier Bardem) meet on a humanitarian mission to a war torn country in Africa with a charity that Wren just so happens to have inherited control of from her father. The two quickly fall in love, but soon find that dealing with gruesome conflicts puts a strain on their relationship.
THE VERDICT: Directed by Sean Penn and lazily boo-ed at the press screening this morning (less ‘BOO!’ and more ‘bleeeugh’), ‘The Last Face’ is a Hollywood romantic drama, produced outside the Hollywood system, that feels vulgar in exploitative set, as it is, against the backdrop of war and actual suffering.

Charlize Theron is in the lead here as Wren, a South African woman who stays in the field with her father’s charity after she meets the charming Miguel. Theron does fine in the role, but this badly written character spouts nonsense for much of the film and insists that people don’t truly know her beyond the superficial. Javier Bardem does well with making Miguel charming, but again, fights against a script that is full of odd choices and frothily romantic lines that mean very little when actually examined. The rest of the cast features Jared Harris, Jean Reno, Adèle Exarchopoulos and Sean Penn’s son Hopper Jack Penn in criminally small and underdeveloped roles.
The screenplay, written by Erin Dignam, pits the first world plight of two privileged people against the backdrop of war, which feels vulgar and exploitative. The title card for this film would have us believe that the “burning love” between the two helped to end the war, but instead, their whining about their feelings and the morality of what they are doing feels indulgent, when real suffering is happening just behind them. As well as this, most of the lines of dialogue are simply laughable – with several of them drawing giggles and applause from the assembled Cannes audience – plot holes abound and characters appear and disappear, seemingly at will, without ever truly being developed. ‘The Last Face’ never examines the politics of the war that the film uses as dramatic tension, which again, feels crass, thin and exploitative.
Director Sean Penn never truly manages to get great performances from his actors, all of whom have the capacity to be great. Most of the performances verge into soap opera drama much of the time, with drama being inserted for no good reason, which makes the film feel disjointed and odd. As well as this, the decision to tell the story through odd flashbacks and flash fowards makes for some incredibly messy pacing.
In all, The cast and subject matter of ‘The Last Face’ deserved better than what they got. The performances from a wonderful cast alternate between cold and hysterical for no good reason, the pacing is messy and this film, which jumps back and forward through time, feels exploitative, indulgent and in the end, crass.
RATING: 1/5
Review by Brogen Hayes