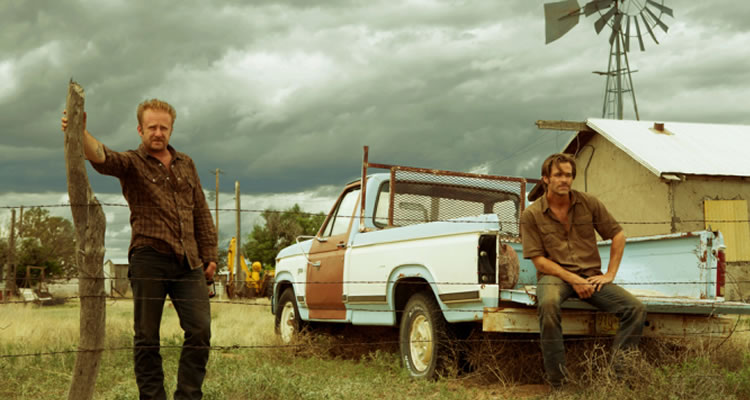 HELL OR HIGH WATER (USA/TBC/102mins)
Directed by David Mackenzie. Starring Jeff Bridges, Gil Birmingham, Ben Foster, Chris Pine, Katy Mixon.
THE PLOT: Brothers Tanner (Ben Foster) and Toby (Chris Pine) have a plan to hold up several branches of The Texas Midwest Bank. After they successfully hold up two branches, and bury the getaway cars on their family ranch, Texas Ranger Marcus (Jeff Bridges) is on the case, chasing them down before they can hit another branch. Although the brothers’ plan is desperate and rather foolhardy, they are determined to save the family ranch, which is due to be foreclosed on in just a few days time.
THE VERDICT: Director David Mackenzie is having a great run of films at the moment, and ‘Hell or High Water’ is such a change of style, pace and direction after ‘Starred Up’, and it is a refreshing change to see an English director successfully take on a guns blazing tale set in the American South.
Chris Pine and Ben Foster lead the cast as Toby and Tanner, the brothers who are holding up banks. Although they are not terribly violent – just enough to get their point across – at the start of the film, audience sympathy is quickly with the duo, as they are charming in their Southern ways, and it is clear that they are robbing banks for a good reason, even if it is not immediately clear what that reason is. Chris Pine makes Toby the quieter, more thoughtful of the two; hurt by a failed marriage and a strained relationship with his children. Ben Foster obviously has fun with the more boisterous and volatile Tanner, and brings enthusiasm and energy to the role.
Jeff Bridges plays the Texas Walker Marcus, who takes it upon himself to catch these two thieves in the act. Bridges makes this role his own, making Marcus tenacious and incredibly funny, as he consistently pokes fun at his partner’s Native American heritage. Marcus is being forced to retire in a matter of weeks, and this gives Bridges a tenacity to play with, and something to fight for in the film. Gil Birmingham plays said partner, Alberto, who takes Marcus’ teasing well; knowing his partner will miss him when he no longer has someone to mock. The relationship between these two partners echoes the one of the brothers they are chasing, which gives the film a rounded, small and personal feel, while giving the audience reason to root for both sides in this conflict.
Screenwriter Taylor Sheridan most recently brought us the incredibly tense ‘Sicario’, and once again takes a slice of crime and puts it on the big screen in ‘Hell or High Water’. The characters are well drawn, the dialogue strong and the world of the film feels as though it was carefully researched and drawn. The film also makes an interesting comment about the recession and the history of America, drawing parallels between the land taken from the Native Americans in the past with the current wave of foreclosure and debts that is sweeping the country.
On paper, David Mackenzie feels like the exact wrong choice for the role as director, but it is he who makes ‘Hell or High Water’ work as well as it does. A film that plays with genre, cliché and expectation, ‘Hell or High Water’ is familiar in many ways, but it is incredibly well paced, filled with heart and thieves on a noble quest, while also being a whole lot of fun with action, laughs and characters to root for. There are a couple of choices made by characters that make little sense, but on the whole ‘Hell or High Water’ is strong, fun and engaging. Having Nick Cave and Warren Ellis do the score for the film lends it a weird and wonderful feel, and feels integrated and evocative.
In all, ‘Hell or High Water’ – despite what you think of the title – is an old fashioned cops and robbers film, set in the deep South during a depression. The film is both utterly contemporary and a call back to the great Cowboy movies of the past; no mean feat. The performances are strong, and the script smart. Even though a couple of inexplicable choices jar throughout the film, ‘Hell or High Water’ is the tightly paced, character driven nostalgic Cowboy movie we didn’t know we wanted, but definitely needed.
RATING: 5/5
Review by Brogen Hayes